Name That Mystery Ship XXXII It's been nearly a year since I last found something I thought challenging enough for a Mystery Ship competition.  Very late last night (as in 5am late) while looking for something else entirely, I stumbled across the perfect thing!  Ladies and gentlemen, here's your image: 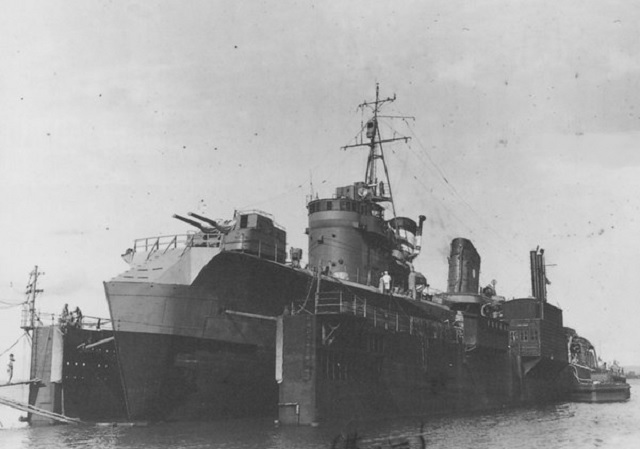 As always, no image searching is allowed... I can't keep you from doing it, but what good is an unearned victory?  CTX and FDM are not allowed to guess (or leave hints) until I let them off the leash.  You get ONE guess, so make it count.  The winner (as declared by me, and my decision is final) will get a post of their very own about anything they want (no pr0n, politics or religion, however) within reason.

Don't just sit there, get to guessing!

1 I'm going to guess it's the Verniy, ex IJN Hibiki.  I can't actually find any images, but my thought process is as follows:
1. To start, it looks like it might be, or based off of, a destroyer.  The rounded tower is indicative of IJN destroyers, and indeed if I bring up the WoWs tech tree and look at Akakutsi, it's a very close match, except for the weird bow. 2. Akakutsi is just an upgunned Fubuki.  IJN Hibiki is a Fubuki class that took a torpedo to the bow, was turned into a guard ship, and then taken by the russians after the war and further re-gunned.
Given that the fore turret looks pretty standard except for the mounting, it might still be Hibiki in the guard ship phase.

2 Well, crepe.  I thought that would take at least two guesses.  This is indeed the Hibiki.   She's in a mobile drydock while she's fitted with a temporary bow after that torpedo hit David mentioned.

3 And now I'm on the spot of trying to come up with an ask that is interesting, but not too onerous.  Have you done a "why rubber ducks" post?  If not, do that.  Otherwise, pick a ship or battle that interests you and that you haven't written about before.

4 Now that the answer is sitting there...well, I still wouldn't have got the question right; I don't know things like that...but it's surprising how recognizable the features of the ship are.