Mystery Ship VIII Update! In November of 2011, I put up a "Name This Mystery Ship" contest that proved to be one of my favorites.

The correct answer was the SS Mamari, aka "Fleet Tender C".  A former passenger liner, she had been taken over by the Royal Navy and converted into a HMS Hermes decoy.  As it turns out, I had not seen another picture of this erstwhile vessel until just about a week ago, when I also found out her fate.  First, the second picture: 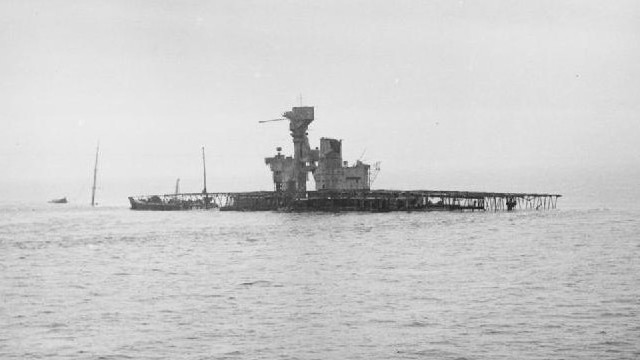 As it turns out, the Mamari was a very good decoy indeed.  On June 3rd, 1941, she was attacked by German aircraft.  In the process of evading them, she got stuck on the wreck of a tanker.  While the Admiralty intended to refloat her, a few days later the E-boats came.  After a couple of torpedoes, she ended up as you see her here.  You can see just how skimpy that "flight deck" was.  It couldn't even be used as a transport.

So there you are... more Fleet Tender C!