My Favorite Moments In Anime A few posts back, I put up a youtube of Funky Cat Maybe! and mentioned that "it's one of my favorite anime things ever."  Which got me to thinking... what are my favorite moments in my anime watching?  Those scenes that immediately jump to mind when somebody asks "why do you like anime?"  They aren't automatically from my favorite shows, though some are, but even a 'meh' show can have classic moments.

Below is my collection of those moments.  They're in no particular order, except for the very last; that's my favorite.  Click 'more' and let's take a look!  Warning: there may be spoilers ahead!


Yokohama Shopping Trip, OVA 1
Alpha, an android that's almost completely indistinguishable from human, has been sent a camera by her (never seen) owner.  She goes out around the countryside on her scooter, intending to "shoot some memories", all the while heading to one certain location.  She gets there just before nightfall, and... 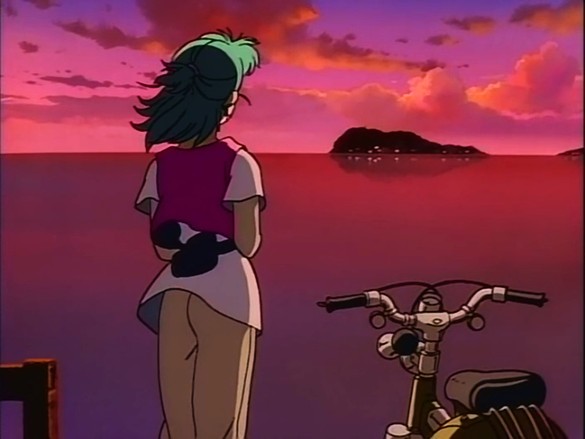 ...she's so taken by the sight that she never takes the picture.  A lovely scene in a slow, languid, beautiful show.

Hellsing, ep01
A very stylish series, I've often described it as better to look at than to actually watch.  Alucard (try spelling it backward) is a cool protagonist with a penchant for showmanship that's really fun to watch.  In this scene, a police girl has been glamoured by a newbie vampire dressed in priest's garb and is being held in a church.  Alucard, in his role as Vampire Hunter, has just stalked into the nave.  The "priest" hisses, and scores of ghouls carrying submachine guns pop up from the pews.  In reply, Alucard... 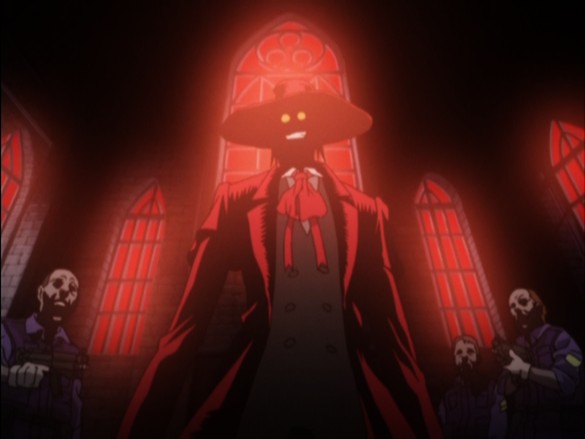 Neon Genesis Evangelion/Evangelion 1.01: You Are (not) Alone
NGE.  Is there a show more praised AND derided, often at the same time, in anime?  Every character in the series is seriously broken in one way, shape or fashion... except for Rei.  Of course, she's got other problems, such as being a clone and/or offspring of an Angel and perhaps being the end of mankind.  She also lives entirely for her job and is mostly emotionless.  She willingly places her Eva into the path of an immensely powerful energy beam so Shinji (the ultimate whiner) can get the killshot on an Angel.  He accomplishes this task, but Rei's Eva is seriously damaged and nearly destroyed.  Inside, Rei barely cares if she lived or died.  Shinji tells her not to say that, and asks her to smile. 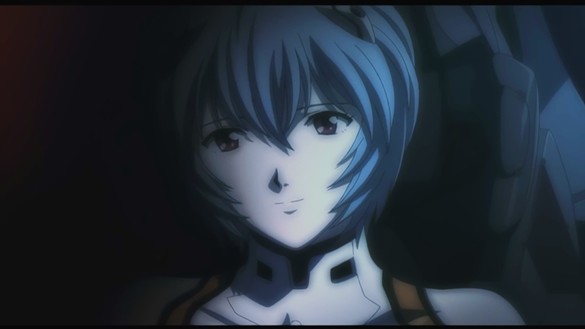 In the series, her smile is a lot goofier, which really ruins the moment.  But in the movie, it's an almost heartbreakingly beautiful scene.

Magical Girl Lyrical Nanoha StrikerS, ep25
In a show where every character is a walking planet-killer, Vita is the ultimate badass.  She's not the most powerful, though she's close.  No, what she's got is an adamantium-clad will and the sort of drive usually reserved for battleships (and the firepower to match), even if she is trapped in a loli's body.  In StrikerS' final arc, when the giant spaceship destined to destroy the planet is approaching firing position, it's Vita's job to fight her way to the engine room to destroy the powerplant.  Alone.  In an epic battle, she plows through hundreds of killer robots, taking wounds the entire way simply from sheer numbers.  At one point, she takes a blade from a robot straight through her torso... then destroys the 'bot without taking the blade out first!  Finally, bleeding, battered and exhausted, she makes it to the engine room and begins to power up in preparation for her final assault.  The defensive systems come on line: hundreds of mobile laser cannon while a robotic voice intones that the intruder will be destroyed.  Vita: 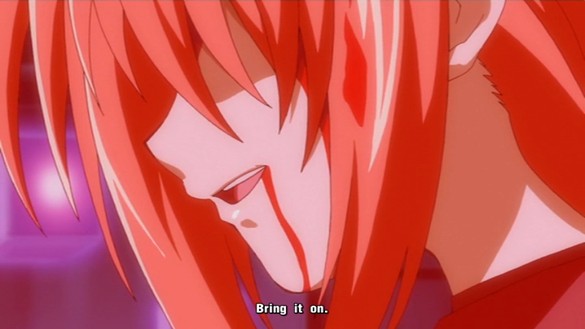 Azumanga Daioh, ep26
My favorite series.  In the final episode, the gang of friends that we followed for the run of the show is graduating from high school.  At the end of the graduation ceremony, the assembly stands and sings a traditional song, thanking everybody for their time together.  Chiyo-chan, the closest we have to a main character in the show, lets her feelings free. 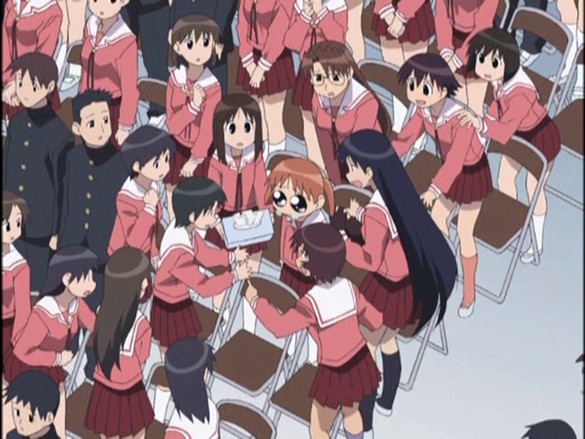 Just a great moment, and one that never fails to make me tear up. 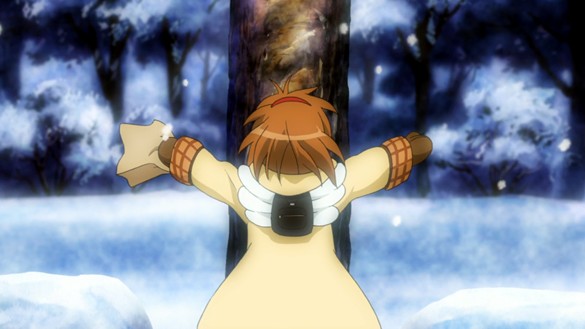 Now, it's time for Wonderduck's favorite moment in anime ever. 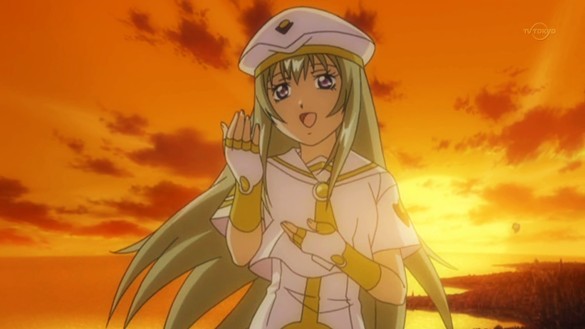 Alice's song, leading up to her promotion from pair to prima undine.  I'd fallen hard for ARIA, and came to love my time spent with the characters.  Now, after 47 episodes and one OVA, came what was perhaps the most triumphant moment in the series, and I had no idea what was coming.  It completely blindsided me, and by the time her second glove was removed by Athena I was actually cheering.  I've watched this one episode more than any other single episode of any other show, and even now it makes me emotional.  Throw in the quality animation, and it's something I'd be happy to show to anybody, any time.

So that's mine, what are yours?

Most of those are spoilers. (I didn't know that about Vita.) Maybe a warning above the fold?

Kamichu: Yurie reassembles and repairs the spirit of Yamato.

Saki: Saki makes Plus/Minus Zero for the fourth time running. Despite Nodoka trying to sabotage her.

Vandread Second Stage: Bart upgrades the Nirvana. And then all the rest of that episode.

Macademi Wasshoi: There are several, but I'll choose this: Tanarotte jumps into Laplace and saves Takuto.

2 I've haven't watched much anime in a while, but these come to mind immediately.

Hmm.  Now that I look at these, they're all kind of depressing.

3 I tend to have favorite episodes or story arcs rather than scenes, but the following scenes stand out for me and I often end up going to watch just these scenes and watch an entire disc or series as a result.

RahXephon: When Ayato fights and kills the dolem <spoiler>that turns out to be his childhood friend.</spoiler>  Certainly not a happy scene, but incredibly powerful and well done.

His and Her Circumstances: The wild chase at school that leads to Arima confessing to Yukino.

Ghost in the Shell Innocence: The fight scene with Batou against hundreds of puppets, <spoiler>one of which gets taken over by Major Kusanagi to give him a much-needed bit of help.</spoiler>

4 Starblazers/SBB Yamato: While it is not as flashy or dramatic as many well regarded last moments on screen The death of Captain Avatar (Okita)  is a quiet, poignant and very powerful scene. A brief, superbly paced scene with only 4 words spoken ("Dr. Sain...Thank you."), it still makes me tear up. In the American version, Rick Emersons delivery is absolutely out of the park.   There are several other really good scenes in this show many of which have become cliche' over the years but that scene is pretty unique.

Zone of the Enders: The fact that there is a 35 foot sentient battlemech (with the mind of a schoolgirl) amongst our band of adventurers is not actually central to many of the episodes. Case in point is a scene where James Links (who has been trying to improve his parenting skills by reading a self help book) finds himself face to face with the author of said book...and the authors estranged son...in the context of the series this scene is both out of the blue and utterly priceless. Hillarity ensues.

Van Dread: The battle sequence end of the final episode of the first season is a superb climax and one of the more satysfing action scenes ever. PILOT LIGHT !!

Black Lagoon: The chase scene with our heroes PCs being pursued by the goth loli with teh chainsaw and Stabby-StabbyMcChinglish. Unusually, this actually works for me much better in the American version, though in no version does it ever even remotely approach respectability.

Bleach: Ichigo discovers the 'monster' in his closet.

5 My favorite moments, no particular order:

Mahou Shoujo Lyrical Nanoha: Many good ones.  The ending episode of A's, especially Reinforce's sacrifice to end the book's cycle of reincarnation.

Ouran Host Club:  Episode 5, the Twins Fight: the big reveal at the end of the fight.  I had the privilege to watch this for the second time at a convention with a room full of people.  The first-time reactions are priceless.

Melancholy of Haruhi Suzumiya:  The fight between Yuki and Asakura.

Baccano!:  Another series with a number of favorite moments, but especially the reveal of Rail Tracer's identity