(Mini-ish) F1 Update!: Korea 2013 It didn't rain, and the result was preordained.  Yet there was some awfully weird stuff happening in Yeongam, South Korea the other day, and we're here to cover it.  THIS is your F1Update! for the 2013 Grand Prix of Korea.

*THE RACE:  To the surprise of absolutely nobody, the lights went out and Hannibal Vettel, our polesitter, jumped away to the lead.  However, and this is a huge difference, he did not go streaking off over the horizon, looking like he was trying to lap the entire field and standing a good chance at managing the feat.  Instead, he only managed to open up a 2.5 second lead over Shiv Hamilton, a lead that didn't much look like it was going to get much larger.  As radio calls began to fly back and forth between drivers and pit walls, the reason for the smallish lead became clear: tires.  The two tire compounds Pirelli had brought to the track, the super-soft and the mediums, were not lasting anywhere near as long as expected.  In particular, the front-right tire was taking a serious beating around the back half of the track, what with all of its left-hand turns.  Still, none of this was making it look like Vettel was going to be kicked out of first place any time soon.

*THE WEIRDNESS:  And then the weirdness began.  On Lap 28, Nico Rosberg was all over the back of his Mercedes teammate, Shiv Hamilton.  Hamilton was suffering from tire problems; all the tires on the day had graining problems, but once the graining wore away, the tires would be almost as new.  Not so with the set on Hamilton's car at this moment.  We quote from his radio call to his pit wall: "They went through the graining period already; now they're sh*t."  All of this made passing Hamilton a slice of pie for Rosberg.  He got into the Brit's slipstream, opened his DRS, and pulled out from behind... and this happened: 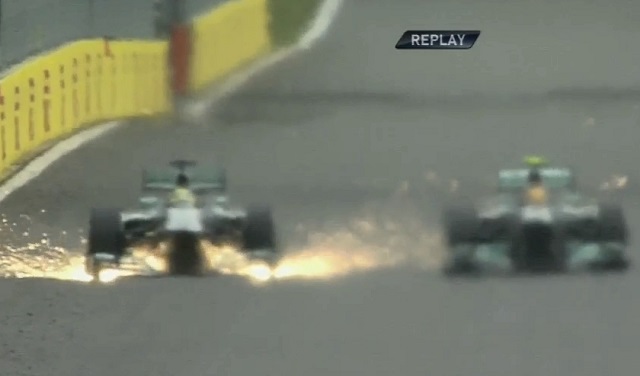 The two top mounting points for the nose of Rosberg's Mercedes failed, dropping the front wing to the pavement.  We here at F1U! have watched Formula 1 for years, and we've never seen a car's nose detach without having suffered other damage, like from an accident.  While spectacular, and in the long run it certainly cost Rosberg a podium shot, the car was essentially undamaged.  Once the nose was replaced, the Mercedes continued on as if nothing had occurred.  What happened three laps later, however, was somewhat more critical.  On Lap 31, McLaren's Sergio Perez had a huge lockup going into Turn 1, putting a visible flat-spot on the front-right tire.  A few hundred yards later, with Mark Webber close by, this happened: 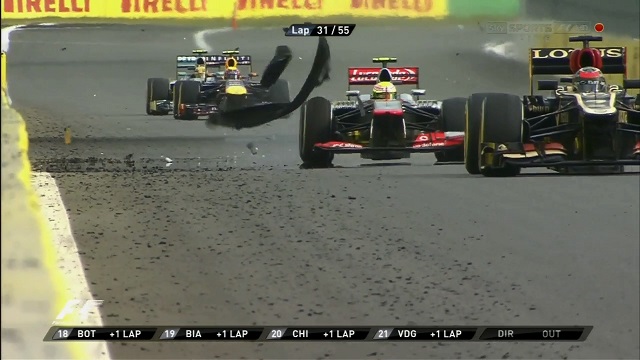 Perez's tire completely let go, the rubber carcass separating completely from the kevlar backing, and taking big chunks of McLaren bodywork with it as well.  Webber, fresh out of the pits and shod with a brand new set of medium tires, had no choice but to drive through the debris field.  Almost immediately, the Red Bull pit wall told him he had punctures and he had to pit for a new set of tires.  Problem is, he had 24 laps to go and the last set of medium tires that he had... were the ones that had just been ruined.  Say goodbye to his chances for a podium.  Fortunately for all concerned, the Safety Car was called out to allow for clean-up of the tire and associated detritus.  It stayed out for six laps, then came in and racing began again.  The restart lasted all of three turns, for it was there that Adrian F'n Sutil spun and slid directly into the side of Webber's Red Bull.  Sutil continued on, but this is what happened to Webber:

The contact apparently shattered the oil cooler, which promptly caught fire, as intense a blaze as any we've seen in F1 for a while.  However, that isn't the weird part.  No, the weird part is that, before the Safety Car was called out, this was spotted on-circuit: 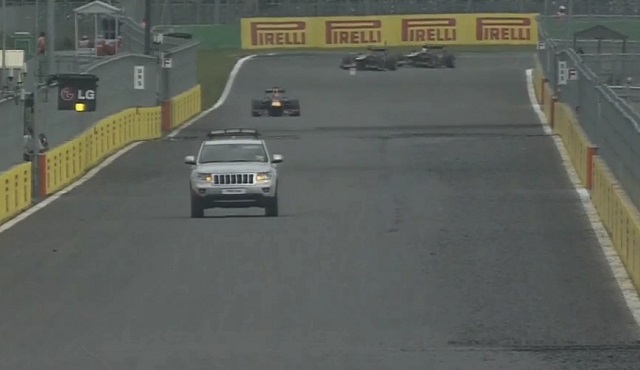 The track Fire Vehicle was sent out before the field had been neutralized... and that's Hannibal Vettel directly behind it.  Almost immediately after this, the Safety Car was called for, white flags (indicating a slow-moving vehicle is on track, and drivers should be alert) were being waved and it looked like the field began to form up behind the truck, instead of the Safety Car!  NEVER seen that before.  Fortunately for everybody, that was the last of the weirdness and the race continued as normal afterwards.

*THE END: In the grand scheme of things, though, none of this was anything but a mild diversion for Vettel, who wound up romping home ahead of the Lotii of Kimi Raikkonen and Lettuce Grosjean.  He now has a 77 point lead over his nearest competitor, and can clinch the driver's championship in Japan.

*WHAT DOES IT ALL MEAN?:  Vettel earned his second consecutive Grand Slam (winning from pole, leading every lap, setting fast lap of the race), the first driver to do that in F1 history.  There's no reason to think he couldn't do it in Japan, either.  Yeesh.

*FINALLY: Japan is Sunday morning.  We'll see you then!

1 No, all you spectators that were cursing the blue and red car! You got the wrong Red Bull!

I'm beginning to think that the two-to-three-stopper isn't worth the tire degradation. You get drivers driving to deltas instead of driving against the guy in front or the guy behind, and you get clag, clag, gods you get clag... which narrows down the circuits which already don't have a lot of good places for passing. And that's completely aside from the Exploding Tire Roulette mini-game...

What's up with Hulkenberg? Putting the car in fourth, okay, sometimes one of the back-ranker teams gets a good qual run. But keeping it there? How'd he even do that?

Lookin' forward to the next race and the next F1U.

2 Sauber has become the legit fifth fastest team on the grid.