Mini-F1Update!: Abu Dhabi 2014 The evening was clear and warm as the F1 Carnival took to the grid for its final performance of the season.  The final showdown between teammates Lewis Hamilton and Nico Rosberg for the Driver's Championship was at hand with the young German needing a victory and help to score enough points to take it from the Brit.  Would he get it?  THIS is your mini-F1Update! for the 2014 Grand Prix of Abu Dhabi!

*LIGHTS OUT:  Rosberg's hopes for the Driver's Championship essentially lasted just long enough for the cars to roll 100meters or so.  By that point, Hamilton had perhaps the greatest start of all time, already passed Rosberg, and was working on opening a lead as they ran into Turn 1.  Indeed, Williams' Felipe Massa was hard on the German's wing in third, an ominous sign.  While Massa slipped away soon enough, Rosberg had no real answer for Hamilton.  Even through the first round of pit stops, the lead was around three seconds, but you never got the feeling that Rosberg could really cut into it.

*WORST FEAR: On Lap 23, Rosberg had a fairly substantial tire lock-up, but it seemed very much like any other such event.  Until you realized that suddenly the gap from Hamilton was over seven seconds, not the three it'd been all race.  Then came the call to the pit lane: "I'm losing engine power."  A whole lap passed before we heard the response from the Mercedes mechanics... Rosberg's KERS unit had packed up and gone home for the night.  As a result, Rosberg was going to be down some 200hp on power for the rest of the race, and his braking was going to suffer as well.  By Lap 27, Massa had caught and passed Rosberg for second place.

*AND THEN:  Rosberg's pleas for something to do... anything... to keep him in the top five went unanswered.  He fell to seventh after his next pit stop, something of an adventure with his electronics beginning to get wonky.  Meanwhile, the Mercedes pit wall was telling Hamilton that his teammate "was no longer a threat."  In response, he dialed back his engine just a bit... choosing reliability over speed, in the hope that his power unit wouldn't cough up a lung as well.  This allowed Felipe Massa an opportunity to close the gap as he headed into his last stop.

*FINALLY:  On Lap 43, Massa pitted for the last time, putting on the super-soft tires and returning some 10 seconds behind Hamilton with 10 laps to go.  The Williams driver immediately began taking a second or two off the lead every lap.  Eventually, Hamilton's racing instinct got the better of him and he turned his engine back up to full power, putting paid to Massa's charge.  Even with that, he only led the Brazilian by 2.5 seconds when he crossed the finish line to win both the 2014 Grand Prix of Abu Dhabi and the 2014 World Driver's Championship.  Valterri Bottas, Massa's teammate at Williams, came along in third, giving Williams their first double podium since Monaco in 2005.  Nico Rosberg finished in 14th, after refusing a request from the pit lane to retire the car.

*DRIVER OF THE RACE:  Daniel Ricciardo was forced to start the race from the pit lane, thanks to Red Bull's front-wing chicanery.  He finished the race in fourth place, a full forty seconds ahead of his Ferrari-bound teammate 4Time Vettel in eighth.  Not too shabby. 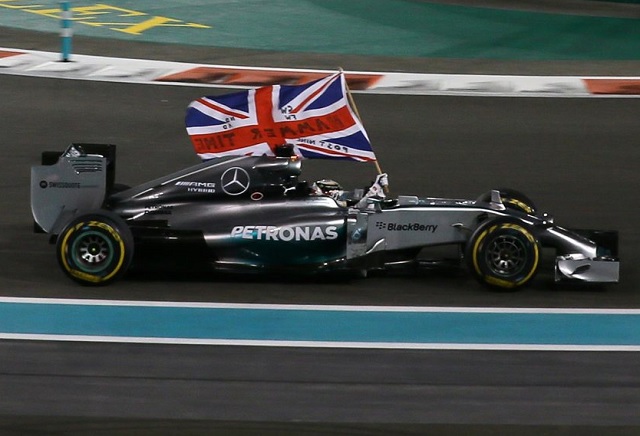 "It's the greatest day of my life." - Lewis Hamilton

"It was close at the end, who would have thought?" - Felipe Massa

"Speak for yourself." - Valterri Bottas

"If I'm now done with Formula 1, this is as good a way as any to go out, I suppose." - Jenson Button

"I swear to you, I really was in the race today." - Sergio Perez

"What the king says I cannot go against. The king is the king. He is always right." - HWMNBN (note: King Juan Carlos of Spain said that he'd been told that HWMNBN would be driving for McLaren in 2015.  Actually, he abdicated in favor of his son earlier this year, so once he was the King of Spain.)

"He’s done an amazing year, an amazing job and he was the best driver on the grid this year, for sure." - Nico Rosberg (speaking of Hamilton).

So.  That's it for the 2014 season.  Congratulations to Mercedes for just completely dominating the entire year.  The next race will be in Australia, March 15th, 2015.  Thanks to all the F1U! readers for following along for another year, and we'll see you soon.

1 Rosberg showed some class there.

Williams certainly had a great year, but we really need to recognize Force India, too. Hulk finished in the points nearly every race, for instance.

Does the flag say "Hammer time"? I can't tell for sure. (If so, what does that mean?)

3 Now to see how things shake out in the next few months. One gets the feeling that the next season will be really boring (further stratification) or really bizarre (shake-ups in the ranks and/or ridiculous new rules to adjust to)...

4 Does the flag say "Hammer time"?

It does.  At one point this season, Lewis' chief mechanic got on the radio to exhort him to go fast and screw the tires by saying "Okay, it's hammer time."

5 Hamilton's best performance since he played Lewis Hamilton in Cars 2.

6 What a strange year it's been. Hopefully, next year the cars will be a little closer in their competitiveness, so that we can actually see which drivers are best on a given day.