Marsdiving If you haven't seen it yet, here's this year's Pulitzer Prize winner for Breaking News Photography. 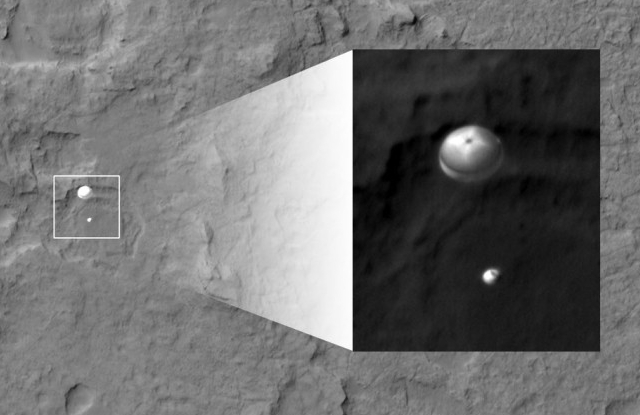 Yes, that's Curiosity descending under a parachute towards the surface of Mars.  It was moving around 900mph at the time, approximately a minute before the rover was deployed via "SkyCrane"... i.e., dangled down to the surface on wires while the rest of the capsule hovers above the planet on rocket motors.

And it all worked.  Man, can us humans do some swell things sometimes.

Which means they had to schedule the landing so that it happened when Mars Recon Orbiter was over head. Really amazing!

This particular crawler is going to be a lot more effective than the last ones were, because it doesn't rely on solar cells for power. It's using a nuclear power source, same as Galileo, Voyager, and Cassini use. It's good for maybe 50 years.

2 NASA Engineers, the REAL 1% we should be caring about.

If only NASA was not being gutted into a showpiece of public relation and goodwill ambassador to the world.

Then again, having it as the only American airline going up in space has not been the smartest move either.  IIRC, we can blame Eisenhower for that.