KSP AOK! I'm a space geek.  This should come as no surprise to many of my readers.  So when Kerbal Space Program (aka KSP) proved to be ridiculously popular, I jumped into it with both feet.  It's challenging. 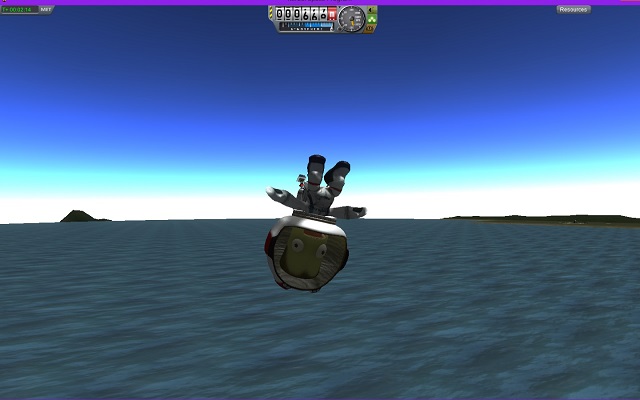 More often than not, this is the result of one of my launches.  Or something similar, at least.  Sometimes it's a staging error: it's generally quite bad to deploy your parachute during takeoff, for example.  Sometimes it's just a conceptual error: if one solid-fuel booster is good, eight must be eight times as good!  But sometimes... sometimes, it's something like neglecting to cross-brace things together.  Who knew that could matter? 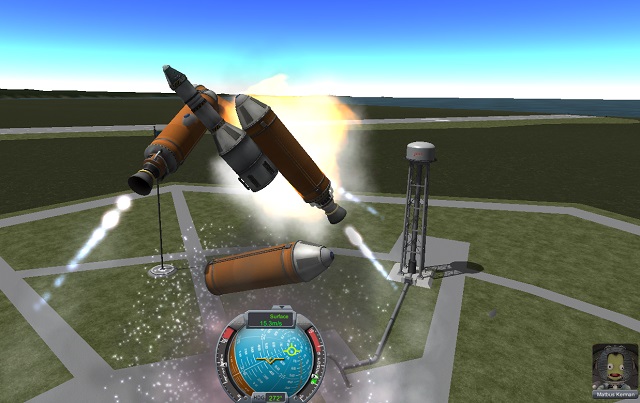 But every now and again, despite all odds and logic, things go right.  The pointy end stays pointed towards space, the big noisy end keeps pointing down, and the little green-guy-in-a-can doesn't panic too much. 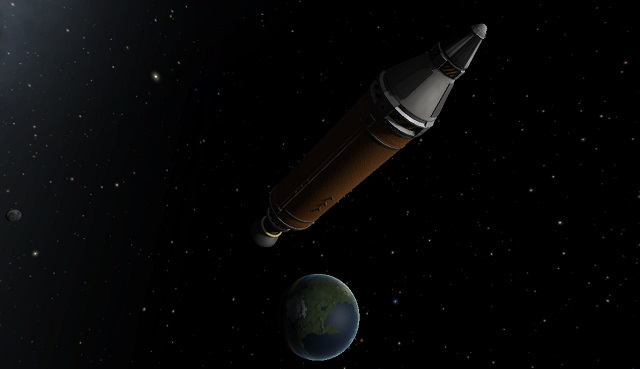 Then you realize you're feeling a sense of triumph.  When was the last time a video game made you feel like that?

It's a helluva game, KSP is.  I daresay it has The Right Stuff.

2 I could not figure out how to fly the damned rockets, not even the pre-made ones.

I found a free download version, though (a demo version I think) so that might have something to do with it.

3 I know it's available on Steam, I just also know that I'd either lose my every waking spare minute to the game or I'd play it once and never touch it again. Either way, too risky of a deal for me right now.

(Especially if I ever want to get The Writing Project done.)

4 Steven, it's available via Steam or directly from the game's website.

5 I picked up KSP many months back, before it was available on Steam.  It's been patched several times since then, getting better each time.  I also picked up a few free mods, such as one that had a very good rendition of the Mercury/Atlas stack.  Pretty!
I don't have much trouble getting into orbit, but I haven't mastered rendezvous yet.  I hate to think how many poor Kerbals I've set adrift in space, and I've put quite a few "landing" craters on the Mun.

6 I've had a poor Kerbal stranded on Mun for months; he walked away from the landing, but my lander stage was pretty much wrecked.  (I forgot to account for the terrain elevation in my final approach.)

It is a very, very good game.

7 Ooh, I see they've added career mode and R&D since I last played.  Must resist being drawn back in....

8 It's quite fun. Less because of the absolute rigor of the simulation, though... anyone remember the shuttle landing simulators that came out in the late 80s and early 90s? Those generally weren't much fun because landing the Shuttle isn't much fun - you're piloting a brick.

No, Kerbal is fun because it encourages you to take a seat-of-your-pants approach to rocket design (it is very near a goddamned flugtag in that respect). Yes, yes, you can look up someone's completely-optimized, rigorously-tested, over-engineered design and fly to other planets in it, but that's just a test in orbital mechanics. But in Kerbal, if you want to try another kind of rocket you just go and bolt the pieces on, send up Jebediah Kerman, and cross your fingers. How many boosters is that... oh, ALL the boosters, you say? And six stages? "Oops, obviously there's some torsion stress there, I can see the flexing!" And yes, hilarious "forgot to put the parachute deployment on the final stage instead of the first one" antics...

The career mode does have one downside, in that you really do need to spend a good amount of time ON Kerbal in order to get the science points to buy the stuff you need to get a decent payload to orbit with enough fuel for a Mun-shot. There's a bit of grinding involved really, or more like "dammit, I came down in the badlands again, no science points left to be mined from here..." (That said, it's actually kind of funny how you can get a good amount of your initial science done by building a rocket, putting it on the pad, then getting out and sending reports from the ground outside the rocket.)

There's another stage where you've got the rocket to orbit the Mun, but not really the stuff you want to put a Kerbal down on the moon and get him back home, and it's a little awkward. Helps if you can do an orbit of the second moon and a little not-technically-orbiting-anything reporting, of course.

Also, the time-acceleration tool spools up and spools down, so be careful with the 10,000x time advance any time you're on a trajectory with a rock at the end - even if you hit "slow down" it might not slow down fast enough for you to avoid denting the planet a little.

9 I just updated to the latest version and started checking out career mode, which wasn't there when I last played.  My first flight was a sub-orbital shot with about 12 minutes in space.  I went EVA to do some science and get some screenshots, and as I was trying without much success to get Jebediah back into the capsule, things started to glow cherry red.  Oops.

10 Getting tempted... If I buy from the website, how hard is it to convince Steam to update it?

13 So, I checked out the Demo, which I'm still working through (Managed to run out of fuel while trying to alter my inclination).  The editor is SUPER frustrating.  The first time through I managed to end up with parts on different planes, and I could NOT make them mate any more. Plus a lot of do-dads on the side of the screen were totally unexplained.

14 Ah, you've discovered what it took me quite a bit of time to figure out: it's not a game, but a sim... and reading the manual or finding youtube tutorials are mandatory to figure out what to do and how to do it.

I still have problems with staging, for example, but I'm getting better.