Kantai Collection Ep06 There are moments when I do these Episodic Writeups when, quite honestly, I don't want to take the time or the effort.  Sometimes its because I'm too busy doing other things, sometimes it's because I just don't want to... and sometimes it's because the Production Staff made something that is difficult to recap just by its nature.  That's the case here, with the new episode of Kantai Collection.  Last week saw the creation of a new fleet and Fubuki become its unlikely flagship.  This week?

Let's get this over with. 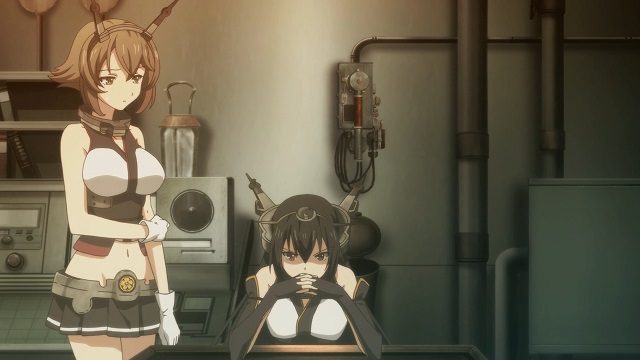 Nagato is brooding over some tough choices she's going to have to make in the coming days, which is her unfortunate duty as Secretary of the Fleet.  Yeah, yeah, that's nice... more importantly, Mutsu's back and feels sad that her sister refuses to share the burdens.  Truly, Mutsu is wonderful.  An episode of her reading a novel and sipping tea would be welcome, Production Staff.  Just a thought. 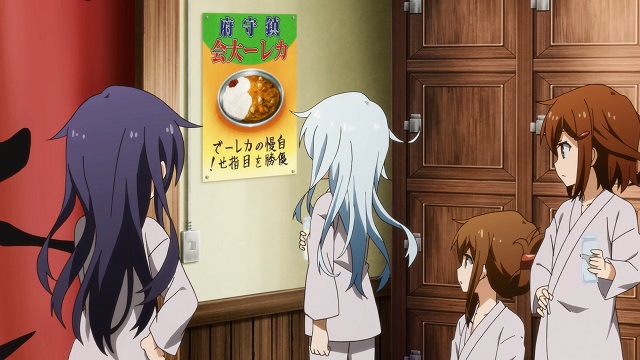 Destroyer Division Six, fresh from a foraging expedition, discovers a sign proclaiming that it's time for the Naval District Curry Contest!  The Imperial Japanese Navy, and for that matter its successor the Japanese Maritime Self-Defense Force, had a long-time relationship with curry, dating back all the way to the Anglo-Japanese Alliance in and around 1902.  Indeed, every Friday was (and is) curry day in the ships of the fleet.  In this case, the contest-winning curry will be the recipe used for the next year.  Well, hell, sounds like a plan to the DesDiv6 girls!  They quickly decide that they'll enter the contest.  It'll be a cinch! 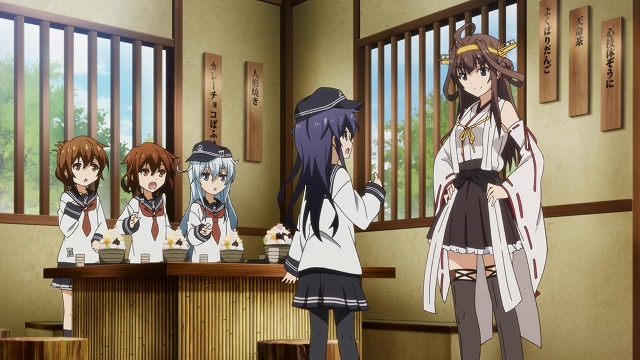 Except that British-born Kongo is going to enter her special spicy English-style curry.  Oh yeah, other people are going to enter, aren't they?  CURRY FIGHT-O!  Look, I like me some curry, but not super-spicy.  We've had this conversation before.  Give me a mild curry, not one that'll punch my teeth in just for eating it. 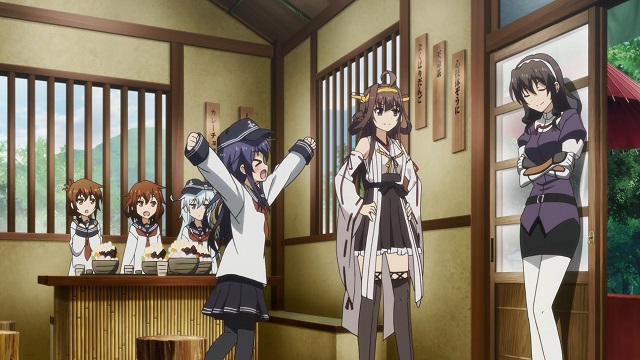 
I went far, far afield once again.  I do that. 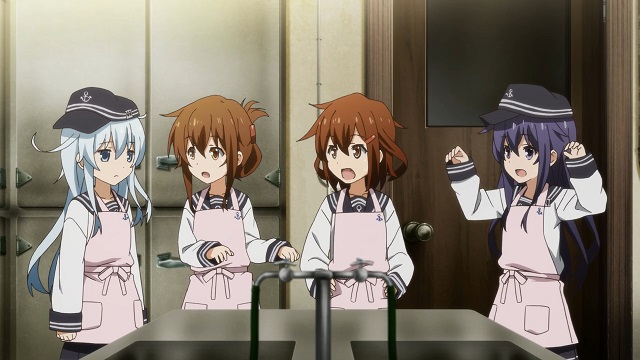 As it turns out, none of them know how to make curry.  Yes, that will make winning the CURRY MAKING CONTEST a little difficult.  A trip to the base library coughs up some cookbooks, so they get a quick lesson on The Art of Curry and return to the kitchen.

Potatoes, onions, carrots... something brown... gets thrown in a pot and then boiled.  Or, it would boil, if all of DesDiv6 weren't watching it.  Y'know, the whole "a watched pot never boils" thing?  Yeah, like that.  They're wondering if it's done after only a minute or so... and please note, the show gives us all that time to enjoy this picture of a pot, interspersed with a picture of the girls watching said pot.  Ladies and Gentlemen, we are officially in a Filler Episode!  Oh heck yeah, I can officially stop caring now!  Wooooo!  Here, have a terrible pun!  I'll put as much effort into the show as the Production Staff!  Eventually, they realize that there's a way to make things cook faster on base! 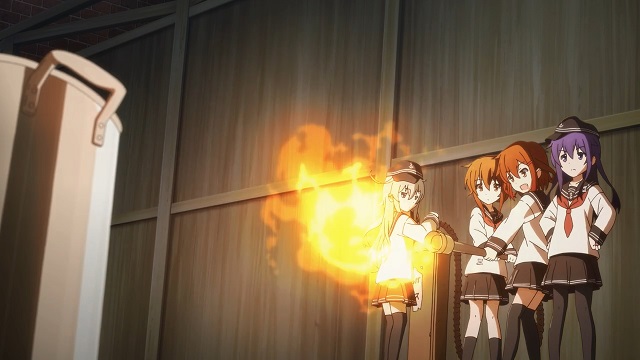 Flamethrower!  I gather this is another one of those game mechanics, like the Magic Repair Fluid from Ep02.  In this case, the flamethrower insta-completes new ship construction instead of however long it would normally take.  I once stated that this show isn't for the average anime fan, but specifically for the players of the KanColle Online Game.  This is simply more proof of that... I had to search to find out just WTF was going on here. 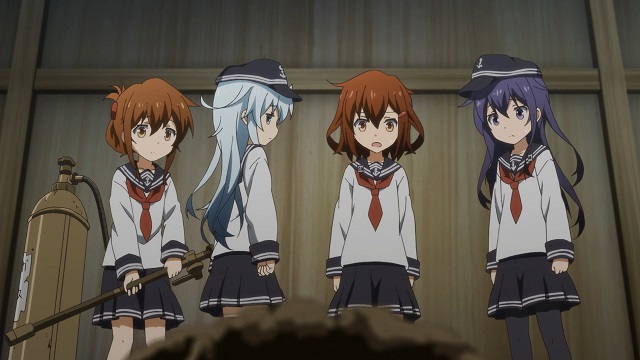 As you can imagine, taking a flamethrower to a pot doesn't go well.  That shapeless mass in the foreground?  It's not a Soviet-era cosmonaut.  Fortunately for them, Yubari, the fleet's testbed ship pops up. 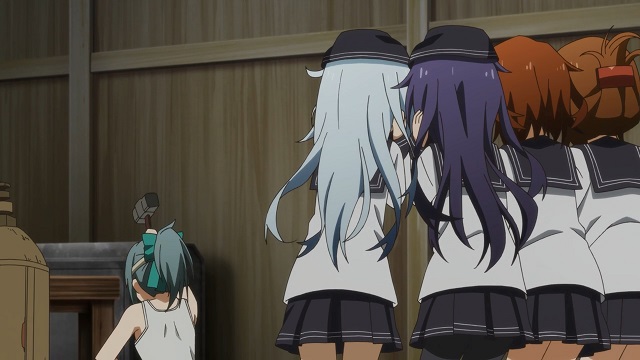 She immediately offers to repair the pot, and with much banging and clanking gets to work.  The sounds terrify the girls of DesDiv6, and once again I am away to the internets to figure out why.  There is a game mechanic where you can dismantle ships for resources, and the sound effect used is the same banging and clanking used in the anime.  Another reminder: it's not for us.  That's okay, that's why I'm here, right?  Pot repaired, they head off on a quest for a legendary ingredient that will make their curry taste terrific! 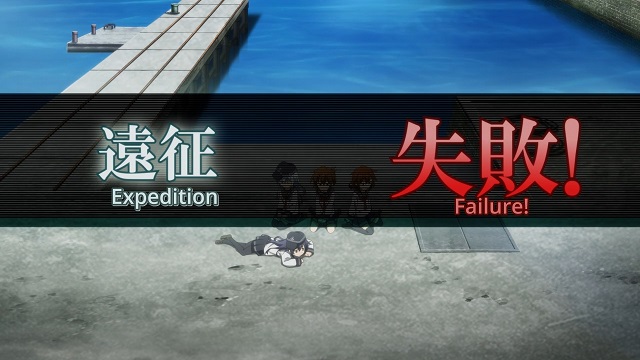 Ah.  Yes.  Well.  They're doomed.  They even begin to feel it, on the verge of packing up and calling it a day, and in the process admit defeat.  It's not like they'd ever win the contest anyway, right? 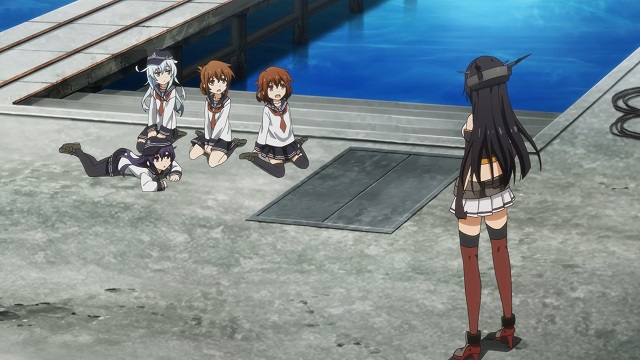 Nagato calls them out on their bullhockey.  A true shipgirl will never give up until she's done everything she could, yadda yadda yadda, you know the speech.  Of course, being lectured directly by your Big Boss tends to jar you out of your misery... or it gets you fired, one of the two.  Still, seems like Nagato's taking an inordinate interest in this contest... and if you've ever typed "inordinate interest" before, you know just what sort of disaster I just had on my keyboard. 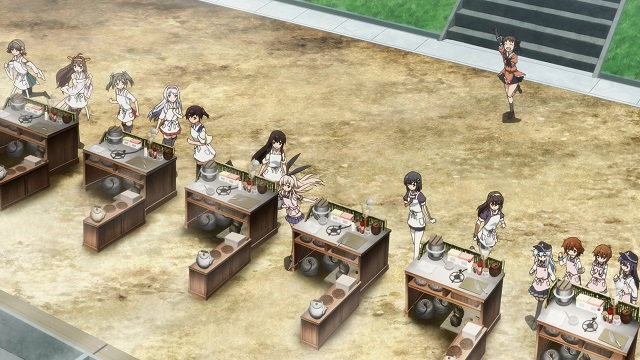 Bang a gong, let's get it on!  The day of the contest arrives and there are six teams... and if you think I'm going to recap this entire thing, you're insane.  What I will point out is that we discover exactly why Nagato's so interested in this thing... 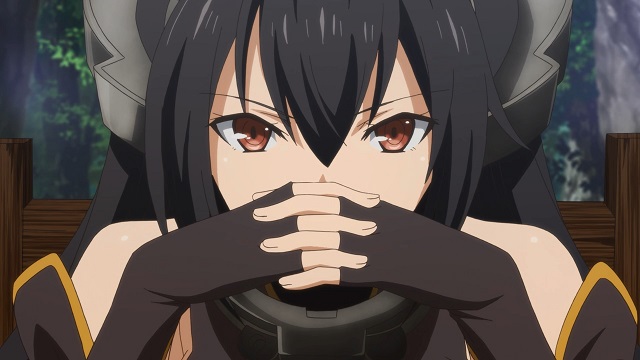 ...she's the judge.  Ladies and Gentlemen, we have a gendo pose. 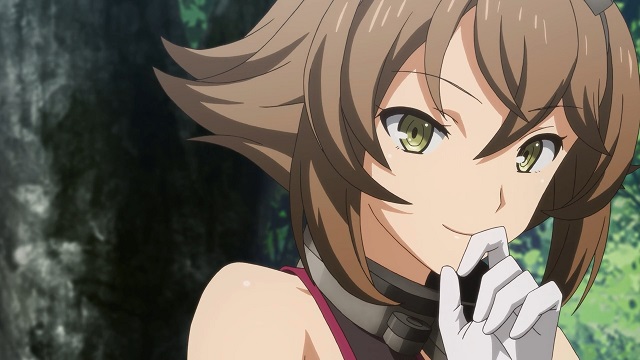 Mutsu's smile is like the heat of a thousand blazing curries.  Just thought I'd point that out.  As the contest goes on, many of the teams end up sabotaging themselves.  For example, Kongo's curry turns out to be toxic... and induces colorscrolling, to boot!  Eventually, all the other teams save for DesDiv6 and Ashigara knock themselves out of the running. 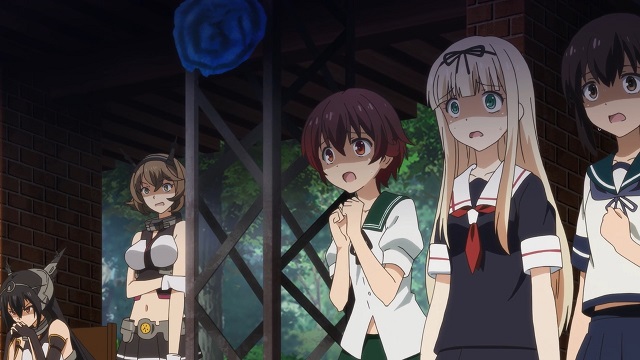 Hey look!  It's the main character!  I thought it was quite nice of Frodo, Merry and Pippin to make an appearance this episode.  And if you think I included this picture only because of them, you're slightly incorrect.  Even with a shocked and disgusted look on her face, Mutsu is a joy. 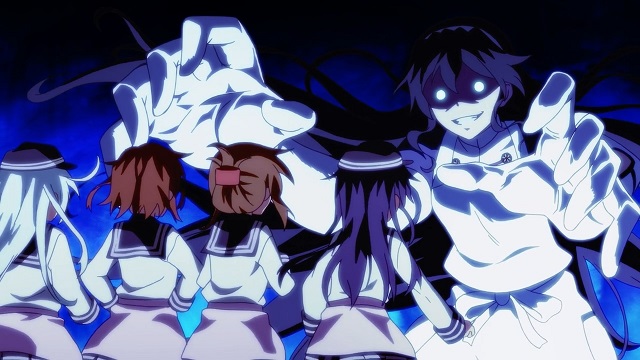 This is it.  The Curry Contest comes down to this... the frightening Ashigara vs DesDiv6.  Who will win?  Who's cuisine shall reign surpreme? 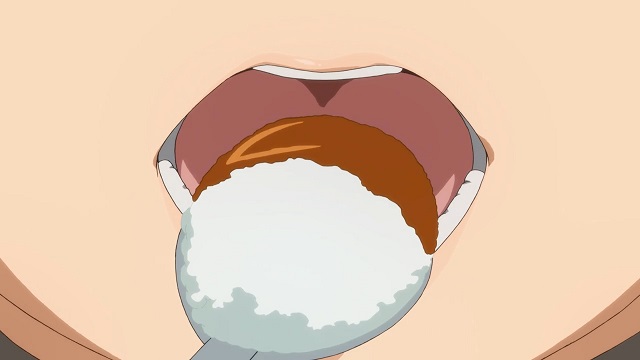 No, no reason for me to put this here.  None whatsoever.  Completely unnecessary.  Guilty as charged.  So's who's the winner? 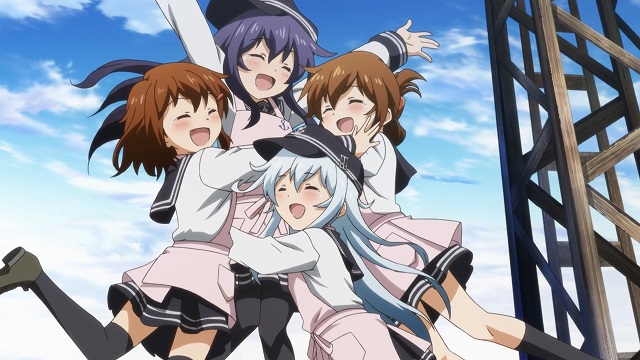 Like there was ever any actual doubt?  Like the show would follow DesDiv6 all episode as they do cute cooking stuffs then deny them the win?  Really, if you thought that would happen, I'd like to watch your version of Kantai Collection, it'd probably be better than the real one.  There's also probably be shell-shocked shipgirls, shipgirls with wounds and injuries, and that would probably be... unpleasant.  Realistic, but unpleasant.  As the celebration begins and runs through the night... 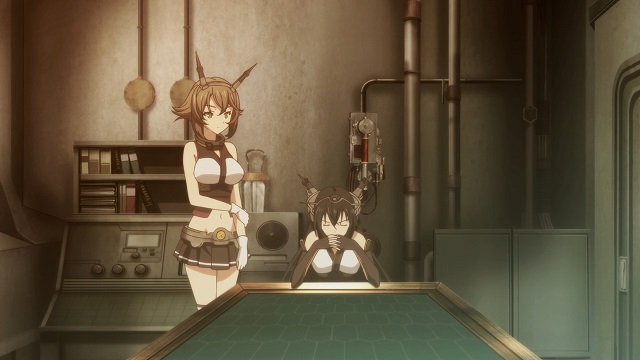 100% pure filler.  Fast food restaurants would kill to be able to use as much filler as Kantai Collection had in this episode.  Unless, of course, the show is setting us up for tragedy, getting us to care about DesDiv6, only to have them eaten by Abyssals next episode.  That would be clever.  It would impress me mightily.  It's almost guaranteed not to happen.  This was totally a fanservice episode for those who play the game, they wouldn't do anything like that.

Come on, Production Staff.  Impress me.

1 The Sankaku Complex comment on the episode was that this fanservice episode was sure to be a welcome respite from the hardcore action and drama that the series was garnering a reputation for.

Someone is smoking the spicy curry.

As far as the close-up of eating goes, this season's Koufuku Graffiti is essentially a show that's about nothing but generating those moments. Seriously, the entire animation budget is used up in those parts as girls stuff delicious foods into their mouths. (not really - the show doesn't look bad exactly, but the show does kind of go into an extremely-detailed over-bright "are you aroused yet?" mode for those scenes...)

Yeah, this ep of Kancolle was plain forgettable. Though I did laugh at Shimakaze's boil-in-a-bag curry entry...

3 Mmmm, looking at that first picture of Mutsu... Nice Hull.

As for Curry, how about some Little Prince goes to New York Curry, it's supposed to be mild.

4 Best possible version of the Gendo pic, there. It's SO TRUE.

An episode where you're required to have meta knowledge to get half the jokes. Le sigh. Le double sigh.

5 Have there been any references to the Kaiten suicide torpedo? In game, the shipgirls request not to be equipped with them.