IJN Musashi Found The wreck of the Japanese battleship Musashi, probably the largest battleship ever to go sea, was located today by Billionaire Paul Allen. 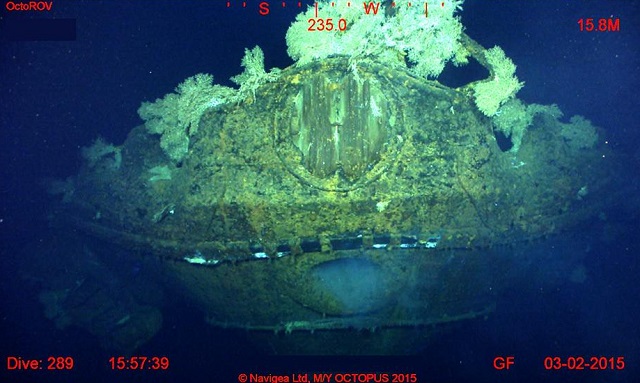 That's the first view tweeted out earlier today, of the great ship's bow Imperial Chrysanthemum (which appears to have either fallen off or been covered by sea gunk) as seen from a ROV piloted from Allen's yacht Octopus.  Amazingly, the Octopus, at over 400 feet, is about half the length of the Musashi.

At last report, they are still trying to prove conclusively that the ship is the Musashi, but it's very hard to confuse her with anything other than her sister ship Yamato which has been precisely located for years.  We have no real idea about the orientation of the above picture... she could be upside-down on the sea floor for all we know.

2 You would know better than I:  was the Royal Chrysanthemum on the Musashi the same size as the one on Yamato?  Because we know where one is already...

3 I can't imagine it wouldn't be, but there's no way they'd remove the one from the Yamato.  War grave and all that.

4 It's supposedly one meter, but I got that off of a Discovery program and there was no context.

5 I can't imagine how you could remove one of these and transport it safely to the surface. It's welded in place.

6 I've heard Musashi described as having much better detail work than her sister and more welding because Mitsubishi's yard at Nagasaki  had more experience with that. Certainly she took more hits before sinking and over half her crew survived.

Wonderduck, is it true that one reason the TAFFY's were hung out to dry was that the fleet carriers had exhausted their magazines in the attacks on Kurita's force? Or were they just not in range?

7 Muppet, Musashi took more hits because of the way the USN's aircraft attacked.  If you look, she took some 19 torpedoes, but they were balanced between port and starboard sides.  This allowed her to flood on an even keel, as opposed to what happened to Yamato.  She took half as many torps, but almost all of them were to the port side, then capsized.

TAFFY 3 was left out to dry because Halsey's ego wouldn't allow him to do his job correctly.  He took all the fleet carriers AND all the modern battleships to hunt down the toothless and impotent Japanese carriers.  As it was, planes from the big carriers did get involved towards the end of the Battle off Samar, which probably finalized Kurita's decision to withdraw.

Seventh Fleet (old battleships plus cruisers and destroyers) used up most of their fuel and much of their ammunition at the Battle of Surigao Strait, and thus weren't able to steam back to Leyte Gulf to help out there. They didn't use everything, though the destroyers had fired all their torpedoes, but they were all low on fuel. Kincaid heard the calls for help and his fleet was refueling as fast as they could, but he didn't finish in time to help out.

9 To be fair to Halsey, some of that is applying hindsight. We know today that the carriers were bait to draw Halsey out of position. But the Japanese navy wasn't the only one whose doctrine favored decisive battle, even if the US didn't normally do dumb things because of it. Especially viewed in light of the Marinaras, where the US fleet operated too conservatively in support of their landing force and thus "let the Japanese carriers get away", Halsey was correct in putting a big priority on sinking those carriers.

Of course he wasn't correct in stripping the landing fleet of the surface assets, especially because they weren't and couldn't have been particularly useful in the kind of battle he was heading to fight. Some of that was doctrine too, though; even if the age of Mahan was over, and the big naval battle wasn't two battle lines slamming into each other, it's hard to see an admiral saying "I have a bunch of heavy ships, but I'm going to head to battle with just my screen and my carriers".

The real goof was the response to the radio message... but even if he'd reacted to it instantly, could Task Force 34 have reached the battle area by then? The damage may have already been done. (But he would have looked like less of a jerk!)

10 It's kind of harsh to say that big naval battles weren't two battle lines slamming into each other, when Kincaid had just finally managed to "cross the T" at Surigao.
What's a good book on the Turkey Shoot?  I find that I don't know much about the naval campaign aside from the high points, mainly the name and the outcome.  Avatar, are you saying that Halsey was fighting the last battle at Leyte?

11 Let's just say that the idea that the Japanese had a bunch of aircraft carriers and the best thing they could use them for was -bait- isn't something that would have necessarily occurred to an admiral of a carrier task force. Using capital ships on suicide runs like that is not in anyone's book...

12 Mitch, assuming you're looking for books on the Battle of Leyte Gulf and not the "Great Marianas Turkey Shoot," which was a few months earlier, there are three you should read.

For a general overview of the entire four day event which spread over 100000 square miles of land and ocean, go with Cutler's Battle of Leyte Gulf.  It does the best at a difficult task, trying to cover such a horrendously large struggle in one book.  It accomplishes the task, but it also kinda proves that this might be a battle that's too large for one book.  Which is why you need to go deeper.  Fortunately, the two BIG conflicts inside the Battle of Leyte Gulf have drawn plenty of attention.

Anthony Tully's Battle of Surigao Strait uses more pages to describe the last battleship fight than Cutler's book uses to cover the entire Leyte Gulf.  If the name sounds familiar, Tully is half of the team that wrote Shattered Sword.

Then, for the Battle Off Samar, aka "Taffy3 vs The IJN", there really isn't any better place to go than Last Stand of the Tin Can Sailors by James Hornfischer.  While imbalanced towards the Americans, it still does a great job of explaining just what happened on both sides.  The book is so good that I recommend it wholeheartedly, despite my personal dislike of Hornfischer's writing style.  There's something about it that sets my teeth on edge, and it's not just this book but the other by him that I've read as well.

That, however, doesn't matter.  Tin Can Sailors is good enough that I'll deal with the writer's "voice".  I've not seen any other gripes about it, so I'm just going to have to assume it's just me.

13 The "Great Marianas Turkey Shoot" is more properly known as the "Battle of the Philippine Sea".

14 Supposedly the wreck is much more intact than Yamato.  That could answer a lot of questions about the design.  From everything I've read, despite many sources siting the same numbers, no one is really sure exactly how big the ships were.  I know historically, when the U.S. finally got eyes on the ships, they were much bigger than expected.  Unfortunately, the size grew mythically in the post-war years:  I've read old blurbs that claimed the two ships were well over 1000 feet long and displaced over 100,000 tons.

15 Paul Allen's website has some photos (including hi-res options) and video.

The caption for the still picture of the bow mentions  the place where the chrysanthemum "would have been" and describes it as being made of teak.  There seems to be something nontrivial that remains attached, but it's been 70 years underwater, so knowing "the answer in the back of the book"  is a big help.

16 Aces, Uncle Ad!  I've been watching his twitter feed, but for whatever reason I never thought he'd have a website.  Beakwing.

17 So at least one of the main turrets have fallen out.  That'd suggest that all three are gone, as the only way they'd come out would be if the ship inverted while it sunk... if one went, the other two would be just as likely to go.

Can't wait to see how it settled on the bottom...

18 Wonderduck, I was actually asking about books on the Battle of the Phillipine Sea, or Great Marianas Turkey Shoot.  The Leyte campaign is everyone's favorite big full-spectrum naval battle, a passion play  full of spectacle and moral lessons, the Wilderness to Midway's Gettysburg,   The Turkey Shoot seems to get glossed over - "and then all the remaining competent Japanese pilots died, the end.  Who's up for some increasingly suicidal grandstanding in place of strategy?"
I guess I have some interest in the idea of a one-sided slaughter considered at the time to be a disappointing failure by the victors.

19 You'll forgive me for being confused, being how this is basically a thread about Leyte, and most of your comment was about parts of Leyte.

Clash of the Carriers by Barrett Tillman is probably the most useful book on the Turkey Shoot that I've read.