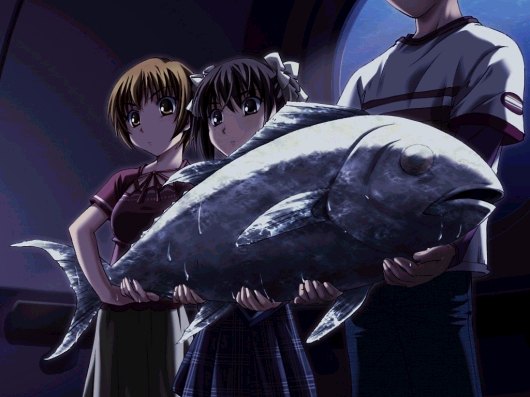 ...so here's a picture of three people with a fish.

I remember seeing film of fishermen in the Med who were catching fish which were that large. I don't remember what kind of fish they were, though, but they looked like that one.

4 It's actually supposed to be a tuna. Not sure they grow that large in real life, but biological correctness doesn't seem to be a high priority for bishoujo game illustrators.

5 If it is a tuna, the size is quite possible.  One of the largest "Northern Bluefin" tuna ever caught was nearly 1500lbs according to wikipedia (take with grain of salt).  In fact, here's a picture of one that weighed 1050lbs.

So the one above might actually be called "small".

6 I've been scuba-diving near a school of tuna in the Pacific that had quite a few that size, and the Monterey aquarium had a tank full of tuna the last time I was there that came close to being that size.  Ive also seen grouper bigger than that, but they look nothing like that, it's pretty obviously supposed to be a tuna.