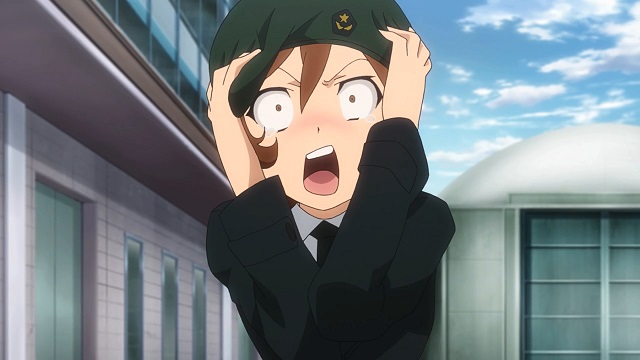 Blogging is not happening.  I'm trying, but nothing's happening.  Sure, I've got things to write about, Gakkou Gurashi Ep06 first and foremost, but everytime I sit and begin to type, it all comes out... boring.  Dull.  Insipid.  Uninteresting.  How in the world do you make the zombie apocalypse boring?  I dunno, but I'm managing to pull it off!  So I'm not going to blog tonight.  Do you have anything you'd like to hear me pontificate upon?  Or, conversely, not talk about because you don't want it ruined by a boring blogger?  Let me know in the comments... or don't, if you think that's a safer option.

1 Anime you wish would get a remake from scratch due to age or quality?

2 I saw in an offhand comment of yours someplace that aside from your interest in World War II with which we are all happily familiar, you are also fascinated by the Falklands war.  I can't recall any posts you've made on that subject...

3 Ship-hunting B-25 bombers in the south Pacific during WW2. What? We all enjoy your WW2 posts.

4 @Ben, that one's easy!  I want a remake of Dirty Pair.  I want the classic characters (i.e., not Dirty Pair Flash, which isn't really Kei and Yuri, no matter how much I enjoyed it) with modern artwork.  Special bonus points if they adapt the Dark Horse comic "Biohazards" for the plot... be a nice tribute to Toren Smith, too.

@David, I am fascinated by the Falklands War, for a couple of reasons.  To begin with it was my "first war", the one that I lived through occurring.  Oh yes, Vietnam ended after I was born, but that doesn't really count as I was either five or seven, depending on which date you use as an ending (US withdrawal or fall of Saigon), and completely uninterested.  Even today Vietnam holds no interest for me, oddly enough, other than how it affected the US military later.  But the Falklands?  I was 14 and a wargamer by then... and it was in the newspapers and on TV news.  I couldn't help but be interested.  Nowadays, it's the only modern naval war ever, but in many ways it could be confused for a Pacific War campaign too: switch the Argentinians with Japan, and the Brits with 1942-43 US, and suddenly a lot of it becomes comprehensible.  But I don't know as much about it as I should.

@UtahMan, did Steven put you up to that?  Heh.  The Mitchells did great work in the Pacific, and the thought of a B-25J carrying 18 .50cal MGs strafing a freighter or destroyer is enough to make my blood run cold.

5 I really, really enjoyed Max Hasting's history of the Falklands War. Years of massive diplomatic cock-ups, utter failure of US diplomacy caused by a capture of the relevant State Department divisions by their local interests, the UK operating right at the end of their resources, all redeemed in the end by a carefully-preserved military professionalism, a few lucky chances, and a healthy dose of just plain being extremely British under stress.

It's also a cautionary tale, in this day of China claiming twenty things under the sun in the South China Sea.

UtahMan, did Steven put you up to that?

Not guilty. (But interested. B-25 strafers were one of the most successful improvisations of the war. They were so successful that North American sent a group of engineers to Australia (not exactly a safe trip) to observe and investigate. And then North American started building B-25's which were equipped that way.)

One reason the Falklands War is interesting for naval history fans is that it is the only time since the end of WWII that a submarine sank a surface ship in anger.

And as far as I know it's the only time since the end of WWII that anyone other than the Americans has used carrier-based aircraft in combat.

And it featured a surface ship sunk by a torpedo. The only other such case I can think of was when NK torpedoed a SK patrol ship, though that isn't officially acknowledged.

There have been several warships since the end of WWII hit and sunk by missiles, but torpedoes (as good as they are) just haven't been used.

7 And as far as I know it's the only time since the end of WWII that anyone other than the Americans has used carrier-based aircraft in combat.

The French have as well, flying missions off the Charles de Gaulle in Afghanistan.  Planes from Australia's HMAS *Sydney* flew missions over Korea.

As it turns out, Argentina has used carrier planes in combat, too... planes off the 25 de Mayo supported the initial landings on the Falkland Islands.  She didn't participate in the naval battles afterward, however.

...right down to a WW2 light cruiser being sunk by a salvo of an unguided torpedo of WW2 design.

Rather a sad end for a ship that had fought so hard and well through  the entire Pacific War...

(While refreshing my memory on this, I blundered across some more things I hadn't known:  that  in the 1971 war between India and Pakistan, an Indian frigate was torpedoed and sunk by a Pakistani submarine, and that planes from INS Vikrant, India's only carrier, flew combat sorties, mostly in an anti-shipping role.)

9 Ah, I forgot about the Vikrant!  She was the only Indian carrier at the time, later being joined by the Viraat.  The Indians are seriously into carriers, what with the Vikramaditya in service and the new Vikrant scheduled for service in 2018.

Yes, the INS Vikrant proved to be very useful in the anti-shipping role.  The Indians always did manage to operate, at least for a little while, the most interesting pieces of equipment - they actually leased a Charlie-I SSGN from the Soviets in the 1980s, though the poor safety factors of Soviet nuclear submarines left a bad impression with the Indian navy.

In the category of 'not war/not peace,' British and Australian carriers were part of the Commonwealth military deployment for the Confrontation/Konfrontasi with Indonesia - which was the single largest deployment of British and Commonwealth naval forces since WW2.  Given the tensions between the two nations (Which almost led to a shooting war at one point.), 25 de Mayo might have been used for the purpose the Argentinians had bought her for - against the Chileans.

And of course, HMAS Melbourne, who never saw action against the enemy yet still managed to sink two destroyers during her career...

the new Vikrant scheduled for service in 2018.

That is the current plan, but Indian military development and procurement projects tend to slip right...A lot.  I would not be surprised if the in-service date finally occurred some time after 2020.

Another thing that just occurred to me - Operation Musketeer was the last time that a non-US battleship fired in anger, when Jean Bart let loose a few rounds at Egyptian positions.

And of course, for the Falkland War, we have 1) the mysterious one-way flight of the Sea King from HMS Hermes to its' final resting place in Chile, almost certainly for the purpose of delivering some Sports And Social boys along the way; and 2) the reply that Argentinian Army Brigadier General Mario Menendez apparently had when told that he was going to command the defense of the Falklands - along the lines of 'what the hell are you talking about?' to his superior.

14 Yeah, the Argentine forces had their own problems. Murphy is the enemy of both sides; the British had done (most of) the necessary hard work to fence him off, the Argentinians hadn't. I'd say "well, the Argentine invasion plan was kicked off prematurely" but, y'know, they had a lot more advance warning than the British did!

15 I would be most curious regarding the Hermes' Sea King story.  Sounds interesting....

"well, the Argentine invasion plan was kicked off prematurely"

More like 'let's do this today, otherwise we will be in jail or dead tomorrow.'  The decision to invade the Falklands was ultimately based on the need to do something to distract the Argentinian people from their opposition to the Junta more than anything else (Something which Christine Kirchner seems to have fallen for.) before it became strong enough to throw them out of power.  The invasion was a surprise to most of the Argentinian forces - hence Menendez' reply.

Of course, I would be remiss to not mention the most famous aircraft from the Falkland War - Bravo November, which is still flying!  And unlike the US Navy, who (Usually.) regard an officer who lost his ship as being morally and professionally suspect regardless of the cause, the Royal Navy ultimately promoted Alan West to First Sea Lord, despite losing HMS Ardent.

17 The B-25 is my personal favorite WWII aircraft. Ever since I saw a "Wings" documentary on it on the History Channel. I referred to the model with 8 .50's in the nose as 1940's disintegrator technology.

My understanding was that for strafing, in the field they would mount some guns in the wings, but the engineers didn't think that was a good idea, and added the nacelles. Although they did have to reinforce the skin near the barrels because of the muzzle blast beating it up.

There was a beautiful example at the Reno Air races this year, and I got a fantastic shot of it during a fly-by. B-25 on DeviantArt.

If you can find a copy, look at the book "Fire in the Sky". It has an extensive discussion of what was done to the B-25 in Australia and why. The original hack version did mount the MG's on the main body. I don't think they were ever mounted on the wings.

Also, the original hack was done by maintenance crew in Australia, particularly a guy named Paul Gunn. Engineers only got involved after North Americann sent some to see what was going on.

I won't try to reproduce it here; it's many pages long and it's fascinating.

19 Allow me to second Steven's praise for Fire In The Sky.   Eric Bergerud covers the air war in the south Pacific during the years 1941-1943 in his second book of a sadly incomplete "South Pacific Trilogy".  It's not a day-by-day account, but instead a look at the battlefield, the crews and, most importantly, the equipment used.  Some may not like his writing style, which does tend to jump around some, but it didn't particularly bother me.  Oddly enough, I purchased it the last time I was unemployed, which as it turns out was just shortly after it came out in paperback... so my copy is nearly 15 years old now.

The one bad thing about it is that it's a very odd format, larger than your average paperback history book, smaller than hardcover, but maybe three or four inches thick.  If they had decreased the size of the print a tad, it probably would have made it less unwieldy.

20 I originally bought it in hardbound, but now I have a copy on my Kindle.

21 While Touched With Fire is an excellent work that I have no trouble recommending, I will probably never read Fire in the Sky again, despite the quality of work and information.  For whatever reason, Eric Bergerud decided to use the first person in far too many points in the book, which is both puzzling and often entirely pointless.  The frequency got to be so grating that I had to put it down and read something else before I could finish.  Never again.