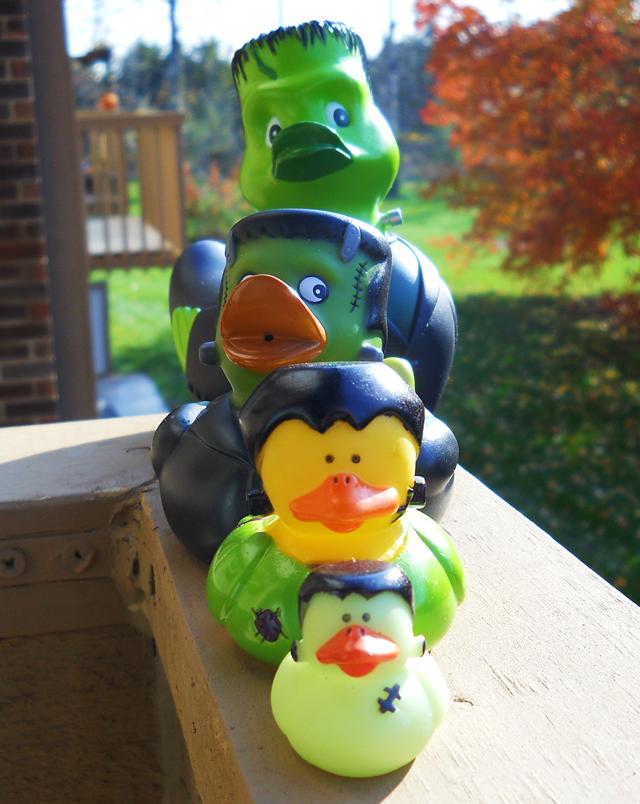 The four stages of a Monster's life.  They start as a youthful abomination, cute but destined for terrible things.  Then as a teenage affront to God, they wear makeup to change their skin color, wear wacky clothing and an odd hairstyle.  As an adult, they become the more traditional fiend.  Finally, the aged duckonculus becomes the very apotheosis of the Modern Monster.

Hope all your lil' abominations have a Happy Halloween!

This is hugely OT, but it's a question I just thought of.

Later in WWII the RN flew US Navy planes. In particular there was a period where they were flying the Hellcat. Initially they called it the Martlett, though later when they started operating with the US fleet in the Pacific they started using "Hellcat" in order to cut down on confusion.

Now there was a big argument during the war about what kind of weapons were best on a fighter. The British tended to prefer a mix of .30 machine guns and 20 mm cannon, because the .30 had a high fire rate and the cannons has the punch to bring down bombers.

The Americans preferred the M2 Browning HMG, arguing that the .50 had better fire rate than the cannons, and had enough punch to get the job done.

Did the British regun their Martletts? Or did they use the same loadout as the Americans (i.e. 6 BMG)?

Likewise, when the RN started flying F4U's, did they regun them?

2 At K-mart today I saw little devil rubber ducks and thought, "I wonder if he has those?"

3 Steven, "Martlet" was the British name for the F4F Wildcat, not the F6F Hellcat.  Neither type of fighter was regunned; they used the same four (later six) .50cal machineguns in the F4F, and six .50cals in the F6F.

Interestingly enough, the French had ordered the G-36A "export variant" of the F4F in 1939, and that was to have six 7.5mm machineguns.  When France capitulated, all existing G-36As were regunned to the .50s and sent to England as the Martlet Mk I.

The British called their Hellcats 'Gannet': the Martlets were the F4F Wildcats.  IIRC, the British retained the .50 MGs on the American designs (In fact, the change of 4 to 6 .50 MGs on the F4F was due to the British requirement.) rather than the switch over, which probably added to an already-complicated munitions supply situation.

I think both sides were correct in their views, at least regarding the .50 versus the cannon, in the situations they faced.  The British had found that, aside from the incendairy rounds, that the .303 machine guns had too little punch to bring down German aircraft (Generally armored and a large number of them bombers.), and that cannons were need to maximize damage.  The US, especially the Navy, faced Japanese aircraft that had less armor and with the greater punch of the .50 (Compared to the .303.) and higher rate of fire and ammunition supply (Compared to the cannon.), so their decision made sense for them.  It probably helped that the Americans did have to face large numbers of German bombers which the British had, once the US entered the European campaign.

But the British probably had the better longer term view, especially since the cannons were much better at strafing attacks (Which along with the folding wings, probably saved the Helldiver from cancellation.) and better at fighting the increasing numbers of armored aircraft.  The fact that the US was still using the .50 in the Korean War against the MiG-15 was a sign the US probably loved the the machine gun a little too much for being an aircraft weapon...

6 Wonderduck beat me to it.  Took too long typing.

Another reason the HMG worked for the Americans in the Pacific was that the Japanese aircraft were firetraps. The standard machine gun load was alternating armor piercing and incendiary rounds, and I would bet that the incendiaries were ultimately more productive.

That's another thing I've wondered about. Did the American fighters in Europe also use 50% incendiaries against the Germans? My bet is "no" but I've never seen anything definitive about it either way.

8 There is a good article on comparative fighter armament here.

The F-86 were roughly equal with the MiG-15 in performance (At least until the F-86E arrived in early '52.), but the Americans benefited from having better gunsights, handling as a gun platform, and especially more experienced pilots, which allowed the Sabres to fight even the Soviet-piloted MiGs on equality or better.

On the firepower side, however, the Soviets pilots (Who had chances to compare Sabre with the MiG-15.) were dismissive of the F-86's machine-guns and preferred their own combination of cannons.  Given that the US Air Force equipped the later F-86s cannons, the advantages the F-86 had over its counterparts did not extend to the .50 and the better performance of the Sabre in Korea against its opponents was dependent on factors other than firepower.

There is a good article on comparative fighter armament here.

Ah, an article by Emmanuel Gustin, one of the old regulars of the rec.aviation.military USENET newsgroup.  It was always an informative delight to read his postings.

If anyone is interested in reading a personal account of the Vietnam air war, a good place to start is the books by Ed Rasimus, another RAM veteran.  When Thunder Rolled and Palace Cobra are definitely worth your time reading.  Rasimus is also one of those veterans interviewed for more than a few TV shows (The type you see on The History Channel.) and books on the air campaign.

And because this typo is too big to go uncorrect:

It probably helped that the Americans did NOT have to face large numbers of German bombers which the British had, once the US entered the European campaign.

12 Wonderduck, sorry for the horrid derail of your thread. I really didn't think it would go this way.

13 Hey, I tried to get it back on-topic by talking about the devil-ducks I saw at K-Mart.

I should have bought them.  I don't think they cost more than a few dollars for the package.

14 Ducks are always welcome, Ed.  Even, maybe particularly, if they're already in The Flock.

15 What, even those scary pink sparkly ducks from Bath and Body Works?

17 I now truly appreciate the eclectic depth and breadth of your collectorship.

18 What a great group shot! Hope ya had a great Halloween! I'm so behind these days. Ah! Pretty foliage you have back there, too!!