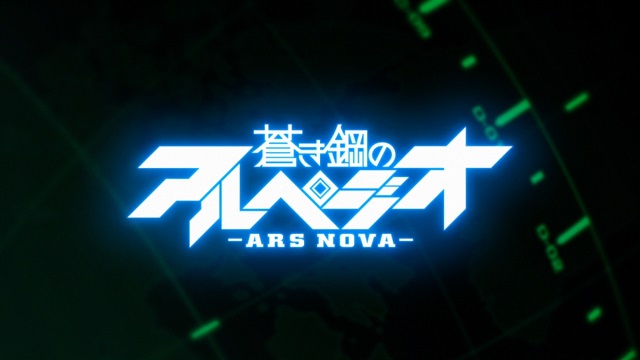 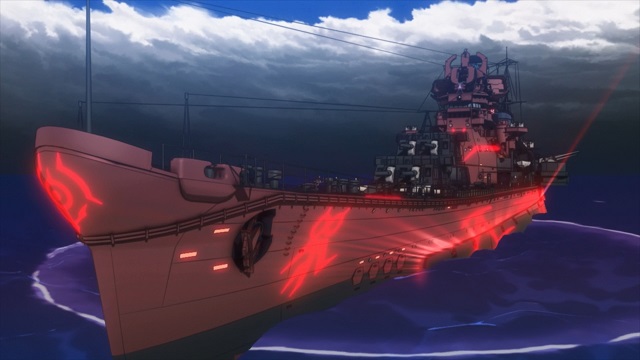 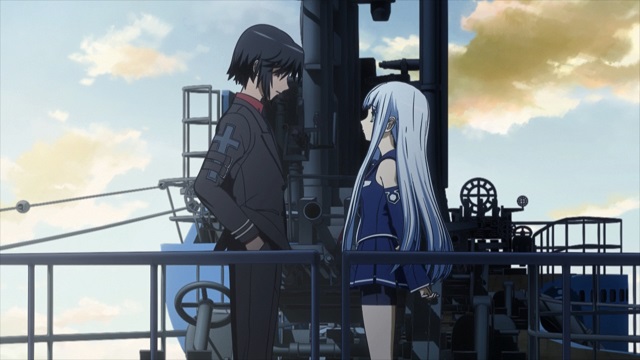 Gunzo is on the left.  The loli on the right is Iona, the "Mental Model" of I-401.  Ships of certain size have the ability to create Mental Models for reasons that are left unclear, particularly as it turns out that they are the main weakness of the FoF.  Every Mental Model that we encounter in the series winds up being corrupted by human contact, eventually defecting from the FoF or flat-out actively siding with humanity!  In fact, the show literally would not get past the first episode if this wasn't the case, as we learn early on that Iona corrupted the Mental Model for the FoF battleship Hyuga, who defected to the good guys and turned Iwo Jima into a secret base.  If Mental Models were just a way to interface with the human crew, that'd be fine... but why exactly would this mystery fleet need to do so?  In one episode, it's mentioned that it's so the FoF could "learn tactics," but then, why do the ships have spaces and equipment for human beings?  It's not like AI-controlled ships need heads and berthing places, after all.  This is the first of many plot holes of Arpeggio of Blue Steel, and probably the worst.  In reality, the answer is pretty simple: the production staff wanted to have cute girls be the avatars for WWII warships.  And have them drink tea. 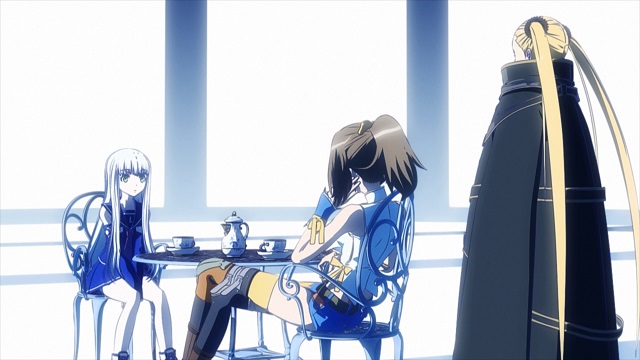 This is how Mental Models converse between themselves.  It was somewhere around this point that I realized that Arpeggio of Blue Steel was ripping off The Matrix, and the final fight confirmed it.  I mean, the Kongo may as well have become Agent Smith given the speech she gives.  It isn't word for word, but it gets the same point across.

My biggest peeve with the show, however, has nothing to do with that.  Here, allow me to introduce you to the crew of I-401! 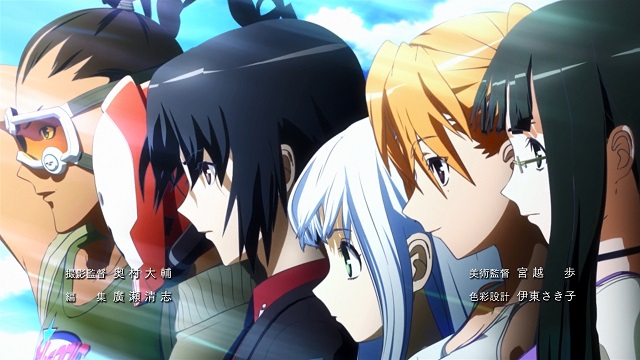 Got it?  Good, now forget 'em.  Other than Gunzo and Iona, none of them serve any purpose other than to say "torpedoes inbound" or "guns ready".  I'm not entirely convinced we ever learn the name of the guy in the helmet, though we do know he wears it because of allergies.  But that's the problem!  You got the guy with the goggles, the guy in the helmet, the wrench wench, and the girly-girl.  That is the entirety of their characterization.  We don't even learn how they wound up serving on the I-401, though in a flashback we learn that three of them knew Gunzo in school.  I desperately wanted a reason to care about these people, and was hoping for a single episode that gave us background on them, and we never got it.  This, possibly more than anything else, annoyed me the most about the series.

The story is pretty basic stuff.  The I-401 is assigned to carry a new-style game-changing weapon to the US for mass production, as Japan no longer has the production ability.  The FoF tries to stop them, and along the way winds up losing more and more defectors to the Good Guys.  The FoF flagship, Kongo, gets seriously target-fixated and goes nutso trying to kill Our Heroes.  Drama occurs.  We never really learn anything about the men who assign the missions, despite them obviously being huge Puppet Masters. 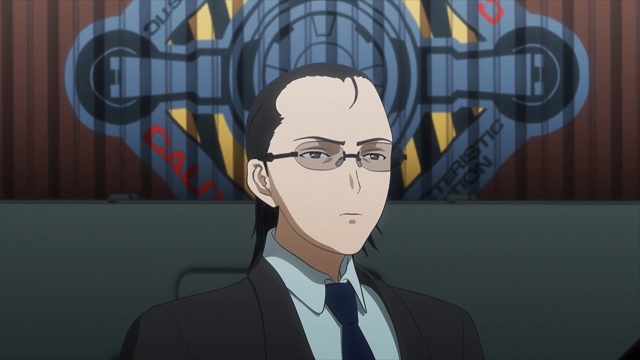 We also don't find out why they think taking I-401 away from Gunzo is the best thing possible, to the point of having them held at gunpoint a few times.  Between all of this and the lack of characterization, it leads me to one of two conclusions: either this is supposed to be the first of a couple of series, or they just assumed that everybody watching had read the manga already.

One thing worth noting is that Arpeggio of Blue Steel is the first anime series to be entirely computer rendered.  This does lend it a certain style that may be a little difficult to adapt to for some.  I was okay with it for the most part, though there were a few moments where it clunked and clanged.

On the whole, I can't recommend the show.  It just isn't all that good, though it has its moments.  If there was a show that screamed for more episodes during the original airing, this is the one.  Another three would probably made this a lot better... one to give us backstory on the crew, one to make the battle with the US Fleet more than what it was, and one more for an epilogue.  Would that have been too much to ask for?

In other thoughts about the show...

...it's good to see Teana from Striker S getting work. 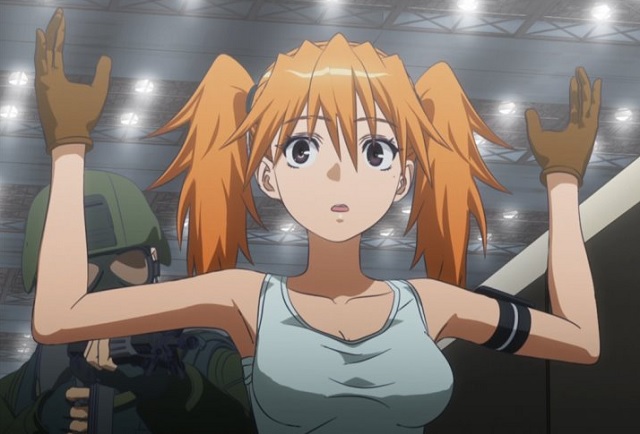 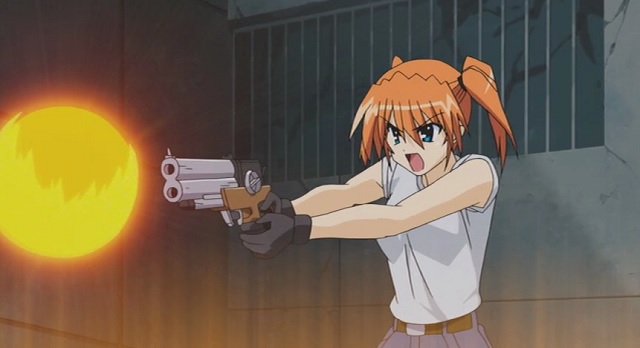 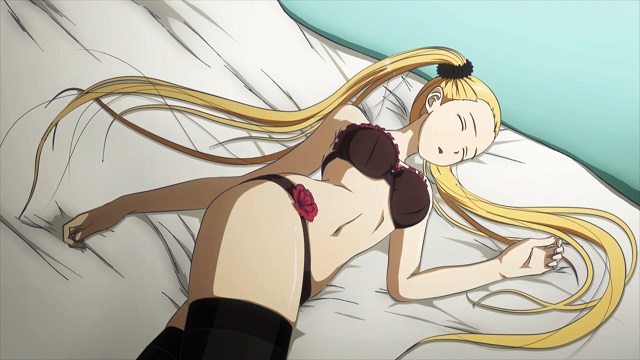 I watched the series in two stints, nine episodes and three the next morning.  This is one of the few shows that I can think of that this is the best way to view it... it gives less time to think about the problems.  Arpeggio of Blue Steel: Watch It In A Hurry!