From Zero To Two In Two Years! It was a struggle.  For five years, us F1 fans here in America had no races that we could call our own.  Oh, we could wander up to Canada, but it wasn't a US Grand Prix.  It was just a race that was nearby.  Last year, that changed with the announcement of the Grand Prix of the Americas in Austin, Texas, which begins next year. 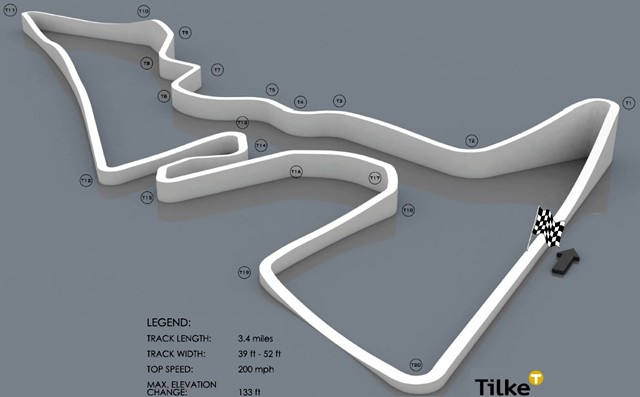 Well, today... today we suddenly have have a wealth of choices as American F1 fans, because this afternoon in Weehawken, NJ, it was announced that a second American GP would begin running in 2013!  Called "The Grand Prix of America," it will run through Weehawken and West New York on four-lane highway... with the New York skyline in the background, just across the Hudson river from Manhattan. 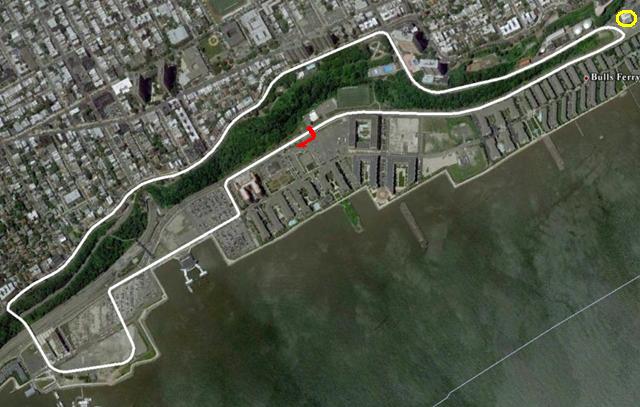 It's to be a clockwise track, with a nearly 300' vertical elevation change to add to the excitement.  Even better, it's a street circuit running along the New Jersey Palisades.  The following elevation map is a screencap from today's announcement, so my apologies for the quality.  The checkered flag is the probable start/finish line.

According to the track map, it's to be around 3.20 miles long.  The cities and various powers-that-be that are involved have signed a ten-year agreement with Birdie Ecclestone.  Let me say repeat that one more time: A TEN YEAR AGREEMENT!  Holy crap, we've got at least one US Grand Prix for the next decade at the very least!  This could only be better if it was in Chicago!

One thing... you might have noticed the yellow circle at the upper-right corner of the top-view track map.  That circle marks the rough location of the West New York Sewerage Treatment Plant.  I hereby declare that hairpin turn shall be, from this moment forward, solely known as "Pooh Corner."

So say we all.

1 Man, you definitely want to keep your car out of the kitty litter on THAT corner...

The obvious question is, "Where is the pit lane?"

There looks to be a curved road starting from just after turn 18 that rejoins on the outside of turn 2. Presumably that's it.

Will they have to build the appropriate facilities there? Or can that be all temporary (e.g. tents)?

Damn, I counted wrong. That curved road is just after turn 19, not turn 18.

By the way, I think you traced part of the course wrong. At about the three quarter point up on the Palisade, they take the branch closer to the water in order to get to the bridge down to the waterfront. (Following Pershing Rd instead of staying on Blvd East.)

Looks like a really interesting course, especially with the huge vertical changes. But street circuits being what they are, I wonder how dangerous it will be?

Oh, heck, I thought it was counterclockwise. (Brain restart after senior moment.)

OK, let's revise-and-extend all the above. The curved road is from the second-to-last turn before the flag to just after the flag, right next to the ferry. After crossing the freeway on that bridge, the course rises on Pershing Rd, joining Blvd East just above the railroad tunnel.

5 Steven, I stole the first map from F1Fanatic, as the Tilke website doesn't have a map up yet (yes, he designed it).  If there's any tracing problems, it's their fault.  (Look at Wonderduck, passing the buck)

Though the red arrow, which is where I thought the start/finish line would be, and the yellow circle are mine.

The curved road does look promising for the pit lane, except it looks like it rejoins the front straight right after the start/finish line, not after the first turn.  *shrug*  Who knows?

Since the race is scheduled to be there for 10 years, I expect they'd build a permanent pit lane (where ever they put it), but the seating would be temporary.  In other words, it'll be a lot like Monaco in that way.

Well, the way they traced it, after they cross the freeway they would be going across forest, up about a 50 degree grade. There isn't any road there, and there can't be. (You can see that if you go in with Google Earth and move the map around so that you can see the 3rd dimension.

They show the course going up that stairway. 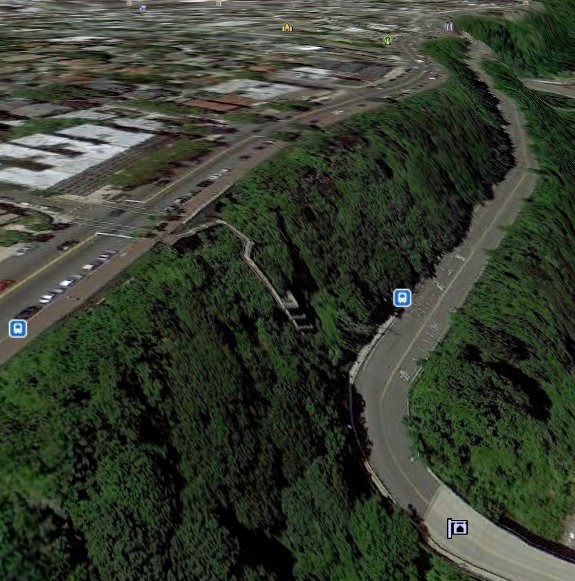 8 Here is an attempt at a track map, and a drive around the proposed circuit:
Map: http://maps.google.com/maps/ms?msa=0&msid=203753455343823173032.0004b01217cd8743d50e2
Drive: http://www.youtube.com/watch?v=Bxvbfm8P47Y
I can pretty clearly see the stairway Steven refers to on the map, and it's not where they go up, of course.
It looks like there are plenty of empty or parking lots along the lower stretch that could be made into the pits, or will otherwise be bleachers.  The roads are apparently in horrible condition, and getting them resurfaced in time will be an interesting challenge.
It will be interesting to see if they block the view from the nearby apartments somehow, or if living there gets you an awesome free view.

David, I suspect it'll be just like Monaco and Singapore: if you live there, you get to watch for free.

As to your route map, I buy it. I think you've got it right.

It looks like it will be a pretty interesting course, too. There are three sections where they'll be going full out, but because it's a street course there are also several sharp 90 degree corners, and of course there's the hair pin at the north end. The elevation changes are major, but they're not roller-coaster like; they just add variety to the course.

Looks like it'll be fun. I bet the drivers like it. (Once they get over their natural reaction to being in Joisey.)

11 NJ.com has a couple of nice videos, including a bicycle and car ride of the course.  I personally can't wait.  An F1 race that I won't even need a hotel for!  Although with all the apartment buildings w/ balconies in the area, maybe I need to try to make some friends in North Jersey.