Formula1.com: Not Partisan At All! So, I guess Formula1.com, official FIA corporate shills website for F1 has made their rooting interests known to all.  Here's a screenshot from today's front page: 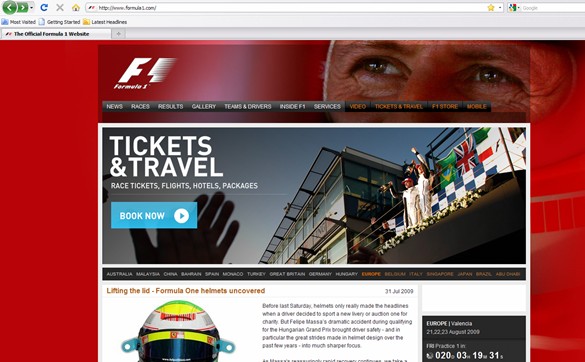 One gets the feeling that if, say, David Coulthard's Chin or Jack Newtown made a triumphant return to F1, they wouldn't get a banner on the front page...  Could we be a little less blatant, guys?

1 Return of Coulthard is non-news because he didn't win 7 championships. Please. Instead of exposing somebody's else biases you succeed in showing yours.

2 The difference is, Pete, that I'm not afraid to show my biases.  The FIA claims to be impartial, and should be, yet obviously isn't.

I'll be blunt.  Promoting any one driver, any one team, by changing the official website of the sport, so that any visitor is slammed with it, is ridiculous.

4 It's pure marketing, just like many of the other things that you find annoying about the sport.  Even my father, who follows racing not at all, heard that Schumi was returning and was interested enough to call me and ask for details and my opinion.  For the FIA not to try and capitalize on that kind of interest would be criminally stupid.

None of which proves that they aren't biased of course, I just don't think that's the driving force here.

His point is well taken. In the end, the only real difference between Vince McMahon and Bernie Ecclestone is that McMahon makes no pretense of running a fair game. The WWF is entertainment first and foremost.

I don't believe that the F1 races are fixed, of course, but F1 isn't a non-profit and disinterested sports ajudication group. It's a for-profit entertainment company, and attracting attention from paying fans is job #1.

In fact, it's job #everything.