Filling For Felipe, Fisi Flees F.I. For Ferrari Sometimes rumors really are true, I suppose.  Giancarlo Fisichella, who's driven for the up-and-coming Force India team for the past two seasons, was today released from his contract by team owner Vijay Mallya.  He was then signed by Ferrari to fill the injured Felipe Massa's seat for the rest of the season. 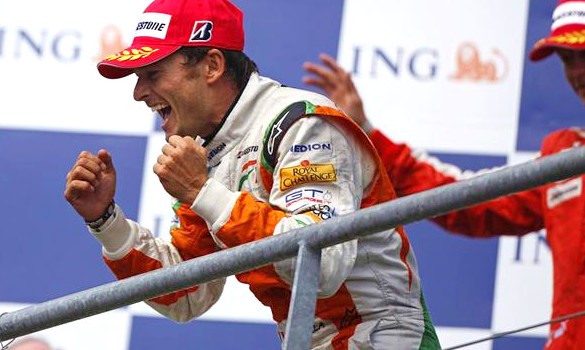 Fisi celebrates Force India's crowning moment of awesome.
"We have chosen Fisichella because we can expect him to make a valuable contribution in this final part of the season," said Stefano Domenicali, team principal for Ferrari. "Giancarlo has shown, throughout his long career, that he is fast and competitive and we are therefore proud to be able to run an Italian driver in our home race."

"Iâ€™m in seventh heaven," said Fisichella in an interview with Ferrari.com. "I still canâ€™t believe it that the dream of my life comes true and I want to thank Ferrari and Chairman Luca di Montezemolo. Over the last week some really incredible things happened to me: the pole position and then second place at Spa and now Iâ€™m called by Ferrari to race the last five races of the season for them. Iâ€™ll give my best to recompense the Scuderia for this great opportunity they gave me: I know that it wonâ€™t be easy, but Iâ€™ll give it everything to gain the best possible results."  He then wiped the drool off his chin.

I suppose I don't blame Fisi.  If I was handed my dream job on a silver platter, I'd likely quit whatever place I was working at so fast, I'd burn stripes in the carpet on my way out the door.  Still, his incredible enthusiasm about leaving Force India for Ferrari seems... I dunno, unseemly.

Vijay Mallya said, "For Force India, this sport is a team effort and removing one part, even a major one, will not significantly affect our performance. The competitiveness of the team seen in Belgium was a result of hard work in the factory and wind tunnel and we have further developments coming for the final races, so we are confident this momentum can be sustained. We are now looking forward to a strong finish to the season."

There are rumors that Force India still owes Ferrari some four million dollars from last year's engine contract.  Mallya (personal net worth: $1.4billion) denied, however, that there was any financial settlement between the teams for Fisi.  Take that for what it's worth, I suppose.

And while I've been quite hard on him over the past two races, spare a moment's thought for Luca Badoer, the man Fisichella is replacing in the cockpit.  Sure, Badoer was brutally slow during his two-race span for Ferrari, but he served the Scuderia well over the past 10 years as the team's primary test driver.  He had an almost impossible task in front of him, being dropped into the seat of a F1 car that he hadn't driven and was expected to perform well when he hadn't driven in a race since 1999.  When he, an Italian, got a chance to drive for the legendary Italian team, he peed the opportunity right down the leg of his firesuit, just in time to miss out on driving at his home track of Monza.

That's gotta hurt, and hurt bad.  I hope Ferrari keeps him on as their test driver;  he deserves that, at least.

Meanwhile, Force India has yet to name their replacement for the departed Fisichella.  It's expected that their test driver, Vitantonio Liuzzi will be tabbed.  He last drove in F1 during the 2007 season; Liuzzi was replaced at Toro Rosso by the now-fired SeaBass.

1 I'm really happy for Fisichella!  It's always nice when someone's career opportunity dream comes true.  Now that he has the ride, he's going to have to prove he belongs there and I hope he does!