F1Update!: Austria 2016 The skies above the head of noted film director/producer George Lucas were a uniformly overcast gray as strolled the pit lane of the Red Bull Ring at Spielberg, Austria, the town which gave Steven Spielberg, himself a noted producer/director of films, his name.  There was a faint hint of rain in the air, a hint which caused no end of concern as the cars of the F1 Circus sat on the grid.  Lewis Hamilton sat on pole, his two closest rivals buried back towards the middle of the pack due to penalties, and one could not but think that it would take some miracle to bring the reigning World Champion to head.  A miracle... or rain.  Would either occur?  THIS is your F1Update! for the 2016 Grand Prix of Austria!

*LIGHTS OUT:  The start of the race was, surprisingly, uneventful.  There were no great comings-together, no massive showers of carbon fiber shards, no mad scrambles to refit front wings or cut tires.  Just the sad sight of Force India's Nico Hulkenberg, originally second on the grid, being swallowed by the ravenous beast that is the F1 grid when he suffered a massive amount of wheelspin at the start.  On the other hand, Hulkenberg's disappointment did give us a look at what some are saying is likely to be the way of things in 2017, as Jenson Button's McLaren tucked itself nicely behind polesitter Hamilton's Mercedes.  This happy state of affairs only lasted a few laps before Button was passed by Kimi Raikkonen's Ferrari, then seemingly the rest of the field, then half of the cars in the parking lots, but for a moment there McLaren was back.

*EYES TO THE SKIES:  Despite their overwhelming advantage in the various championships this season, Mercedes has proven to have two weaknesses.  The first is reliability... there always seems to be something going wrong with one or both of the cars, and Hamilton is already down to his last sets of engine parts, for example.  The second weakness is a tendency for one team of strategists or the other to overthink themselves.  Almost as soon as the race began, drivers were reporting occasional raindrops.  This lead people to start watching the skies with an intensity seen but rarely in life... and for Hamilton's Mercedes strategists to unshackle the giant throbbing mass of brain tissue they keep in a vat for racing planning purposes and let it figure out the best thing to do.  When Nico Rosberg's tires began to fade on him, he dove in for a new set.  Hamilton's strategists decided to keep him out on track for as long as possible, hoping to go from the first set of tires directly to wets, and thus avoid a pitstop.  Good idea in theory, but when Rosberg began cutting huge swathes of time off Hamilton's lead, it was shown to be wrong in practice.  Eventually the great brain was retinned and put away, and Hamilton came in for new tires... and promptly lost the position to his teammate when the pitstop was slowed by a balky tire change.  As the pit rotation completed, Rosberg led the race.

*SAFETY CAR:  The big question was how well could Rosberg baby his tires, as his teammate now had fresh rubber that would last longer in comparison to the multiple-lap-used tires on Rosberg.  Nobody thought that either driver could stay out long enough to finish the race on one stop; the longer Rosberg could stay out on his worn tires, the less laps he'd have to put on the next set, thus cutting into any advantage Hamilton gained from pitting later... he may have surrendered the lead, after all, but if he could stay close, it could easily come down to which driver had more tire grip remaining at the end.  Whatever calculations Mercedes had figured out went out the window when Seb Vettel's right-rear tire blew out, scattering chunks all along the stop/finish straight and bringing out the Safety Car to allow for cleanup. 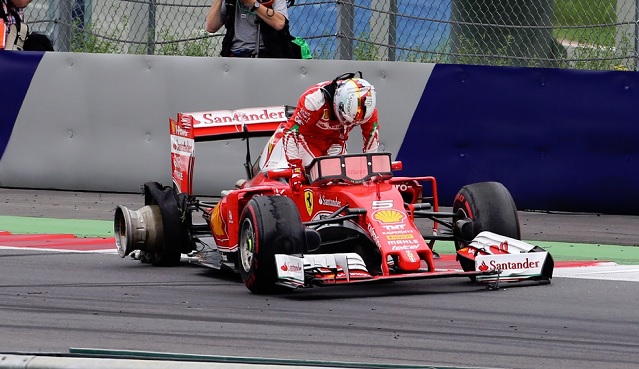 This gave Nico Rosberg a chance to mollycoddle his tires for a few laps, thus extending their lifespan.  Things were shaping up for an interesting run to the flag for the two Mercedes teammates.

*SPRINT: Rosberg's advantage never reached two seconds, and most of the time was right around one second.  However, it came as a great surprise when it was Hamilton, not Rosberg, that pitted first on Lap 54 of 71.  Rosberg dove in the next lap and came out ahead, and on super-soft tires to boot in comparison to Hamilton's softs.  It took fewer than 10 laps for Rosberg to pass first Smiley Ricciardo, then Embryo Verstappen, to take the lead; Hamilton got hung up slightly behind Verstappen and wound up 1.5 seconds back of his teammate with eight laps to go.  Quickly enough, the lead was halved, then halved again.  As the final lap began, the Brit was all over the back of the German, who was clearly suffering from brake problems.

*TAKEDOWN!:  Going into Turn 2, Hamilton tried to go around the outside of his teammate.  However Rosberg, either due to brake problems or sheer bloodymindedness, didn't put much effort into turning in and floated very wide indeed.  The result was predictable. 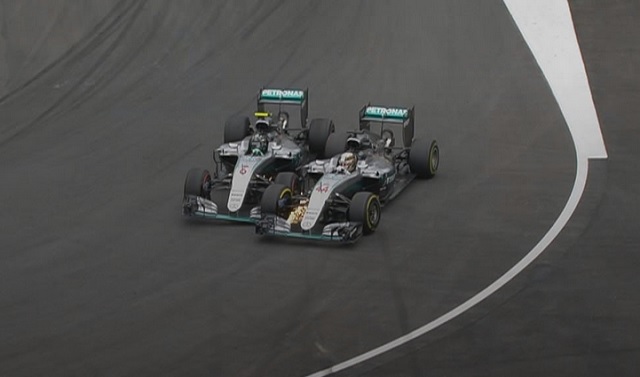 Rosberg would later say that he had the the right of the driving line and the contact was Hamilton's fault.  Anybody who actually saw the incident, however, had to be asking him what line was he taking, the white one that shows the outside of the track limits?  As a result of the contact, Rosberg's front wing got stuck under his car before eventually shattering in a shower of sparks; he would eventually finish fourth and be penalized for unsafe driving.  Hamilton, on the other hand, got away mostly unscathed and wound up taking the win in one of the more interesting races we've seen this year.

*TO THE MANOR BORN: Pascal's Wager Wehrlein had himeself an interesting little race in his Manor.  First, he pulled into the wrong starting slot and wound up having to reverse into the correct one on the grid.  While there were people wondering why he didn't get penalized for that, it's because it's perfectly legal to reverse on-track; it's only in the pit lane one cannot reverse.  From there, Wehrlein managed to get as high as sixth before having some bad luck with Vettel's safety car... he had just stopped, and wound up last as everybody else got the free pit stop.  Yet he made a one-stop strategy work, worked his way back up the standings, and when the Force India of Sergio Perez was retired for brake issues, he found himself in 10th place... the position he would complete the race in, earning his first point and the team's first point since 2014. 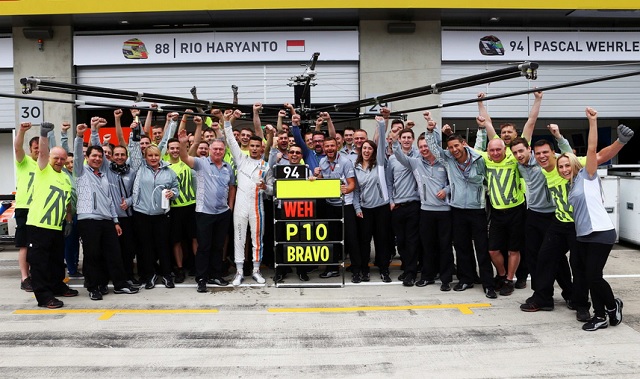 No driver comments this week, as this F1U! is late enough as it is.  Next week we're to Silverstone for the British Grand Prix... see ya then!

1 Basic question: why no reversing in the pit lane?

2 It's a safety thing.  F1 cars have practically no sightlines behind them, teeny tiny mirrors notwithstanding, thus it'd be quite simple for a driver to run over someone in a heavily populated pitlane.

The Sporting Regulations don't give a specific reason (see SR 28.3), however.

Why do these guys not have in-helmet HUDs? Surely it'd be easier to deal with than having to look down at your wheel every time. Is it just a matter of it not being easy to get one in a helmet that would last for two hours of power?