F1 Update!: Valencia 2011 The weather in Valencia was gorgeous as the 24 cars took to the grid, but would the sun shine on the polesitter Seb Vettel?  Or would someone show him the greyness of loss?  THIS is your F1 Update! for the 2011 Grand Prix of Europe @ Valencia!

*NOPE:  As the lights went out, Red Bull's Seb Vettel leaped from his slot on the grid and headed for the hills.  By the end of the first lap, he was well over a second ahead of his teammate Mark Webber, who was being hounded by Ferrari's HWMNBN.  From there, it was just a pleasant Sunday drive for the reigning World Champion, who went on to win with a grand total drama amount of zero.  10 seconds behind him was HWMNBN, who was 17 seconds ahead of Mark Webber's ailing RB7.  Nearly 20 seconds later, Lewis Hamilton's McLaren sauntered across the lane, followed five seconds later by Ferrari's Felipe Massa.  The man currently second in the world championship race, Jenson Button, finished the race in 6th place, exactly one full minute behind Vettel.

*THE BAD OLD DAYS ARE HERE AGAIN:  It wasn't all that long ago that we'd go entire races without seeing anything other than red hot pitstop action!!!  We've gotten spoiled, what with all this newfangled passing and excitement and on-track racing for position that we've had this season.  It took the efforts of a Valencia street circuit to show us what F1 used to be: mostly unexciting.  We here at F1U! are dyed-in-the-firesuit traditionalists, always have been, but we can do without a return to the past in this particular case.  F1, get rid of this miserable excuse for a track, please.

*FIRST EVER: F1 has been around for over 60 years.  It's seen some amazingly dominant drivers (Schumacher, Senna, St Fangio the Quick), but never before have we seen a run like the one Seb Vettel is on.  We're eight races in, and in those he's not finished lower than 2nd in any of them.  That's never been done before.

*DRIVER OF THE RACE: NKOTT.  The Toro Rosso driver started 18th on the grid and finished 8th.  He must have done something right.

*TEAM OF THE RACE:  Red Bull.  In a race that was entirely decided in the pits, Red Bull consistently took tires off and replaced them in amazingly quick times.  Late in the race, where a mistake in the pits means lost time that could cost a driver a position or two, they got their men in and out in 3.2 seconds each.  Everybody else were around 3.4 or 3.5 seconds.  Yes, that's the sort of action we had today... red hot pit stop action!

*MOVE OF THE RACE:  When we're watching a race, the F1U! cohort is positioned with notebook in hand, ready to record anything of importance that occurs for easy reference later.  For Canada, there were six pages of notes, some with clarifying notations on the back of the previous page.  For Monaco, there were four pages.  For this race, there were two.  Not two pages, two notes.  Total.  One of them is for the DRS-assisted pass of Webber by HWMNBN on Lap 21 for 2nd place.  The other one is for Slappy Schumacher's pass of Adrian Sutil on Lap 15.  Neither was particularly exciting, dramatic, or even all that important.  Slappy gets the nod because he did his with his front wing dragging on the ground after he ran into The Red Menace as he exited the pits at the beginning of the lap.  Yay?

*MOOOOOOOO-OOOVE OF THE RACE:  Other than Slappy taking his own nose off on Lap 15 (see above), there really weren't any stupid driver tricks today.  So instead, here's Adrian Sutil with a pair of gag glasses. 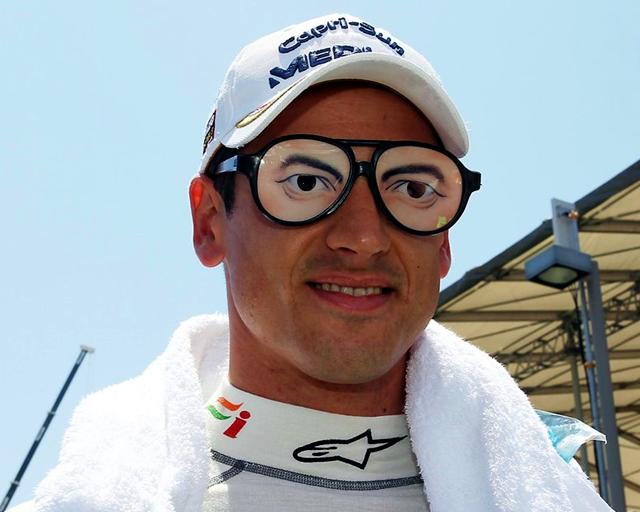 "From the outside, I'm not sure if it seemed that much was happening in the race, but I enjoy it so much." - Seb Vettel (note: real quote)

We're sorry... even our world-famous quotes of the race can't make up for the miserable showing today by the F1 Circus.  Last year, Valencia was best known for Mark Webber's crash, not for the race itself.  This year, we didn't even get that.  Complete dullsville.

We'll be better in two weeks, because the race'll be at Silverstone!  We'll see you then... if we wake up in time.

When one team does everything right, it's what everyone aspires to, but it makes for a dull season.

2 Eh. We've had some great racing this season even if it wasn't for first place. Just not last weekend...

4 The racing world runs on speedtape.