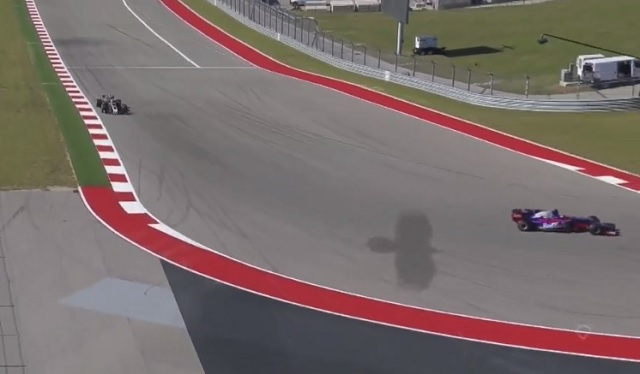 Now THAT'S a damn big bird!  Or a CG overlay, one of the two.  It seems likely it was CG... it seems too unlikely that an eagle would fly across the race track just as a Haas car, the American team, approached the turn... particularly one THAT size.  A very weird moment from FOM, that.
So there ya go, the US Grand Prix!  Next race is the Grand Prix of Mexico next weekend!  See ya then!

1 Let's hear it for putting on a good show!

2 Could have been a turkey buzzard. We have a lot of those around these here parts.

3 Thanks for the update. I was in the airport some 30 miles NW, bleeding a brake, installing a new door strut, and later taking a short shakedown flight. I checked the airspace and what's really strange, there wasn't a Temporary Flight Restriction area for the race. Although, the circuit is within the surface area of KAUS Class C airspace, so perhaps the FAA thought it unnecessary to establish a TFR. But then I saw a football TFR halfway inside Buffalo Class C, IIRC.

4 Another pilot?! You me and Pete. What are the odds?

5 Finally got some time to watch the race.  Again, some really fun stuff happening back behind Lewis Hamilton.  As exciting as Vettel's early move was, it seemed pretty clear that Hamilton was still in control of the race.  I think he even radioed in early that he wasn't worried about Vettel, and that proved out.

It's a shame Verstappen got docked for his pass.  I haven't watched any analysis, so I'm guessing it shows he did use the border of the track to pass...but that was one hell of a move right at the end.  Especially when you consider how close he was to making a move up into SECOND as well.  He put on an amazing show of racing.  Apparently the penalty is controversial.  I'm seeing more and more opinions being voiced that it was a bad call, either in substance or in the lack of consistency in enforcing it.

Finally, watching Sainz, Ocon,and Perez fight for points half the race was fun.  Ocon pulled of one heck of a Gandalf act on Sainz.  Sainz seemed to have a better pace, but Ocon defended lap after lap after lap.

6 The steward responsible, Garry Connelly, has called in bogus penalties on Max several times before. (Where bogus means other drivers did the exact same thing and were not penalized) For some reason, this guy really has it in for Max.

That being said, it's time for Max and Horner to shut up about it and move on.

7 In other news, Lewis Hamilton attributes his rise in the driver standings to his vegan diet.