F1 Update!: Spain 2017 Another breezy but nice day greeted the assembled F1 field as they made their way to the grid today at Barcalounger.  The Mercedes of Lewis Hamilton was on pole, having beaten rival Seb Vettel to that position by .051 seconds during Quals.  Behind them we found their teammates; Valtteri Bottas was coming off the first race victory of his career, and Kimi Raikkonen, is apparently loved by children everywhere.  Back behind them were the Red Bulls of last year's winner Embryo Verstappen, and Smiley Riccardio who was on record saying that the team could win this race "...if the Mercedes and Ferraris crash."  Optimism, you've gotta love it!  But how would it all work out in the end?  THIS is your F1 Update! for the 2017 Grand Prix of Spain!

*START AND HEARTBREAK:  When the lights went out the two Mercedes, equipped with what they were calling "new starting procedures (wink wink)" got off the line much quicker than they've done of late.  This did not stop Vettel from getting the lead on Hamilton into Turn 1, but behind them all was chaos.  Bottas went down the inside of the turn with Raikkonen directly outside and just ahead of him and Verstappen coming up on the outside of him.  We here at F1U! are somewhat divided on what happened next, but the upshot was that the Ferrari and the Mercedes bumped.  Whether it was because the older Finn squeezed the younger Finn, or if Bottas was being a little optimistic is open to interpretation.  After the bump, Raikkonen's car jerked a bit to the left, where it immediately made contact with Verstappen.  The two went off, with the Ferrari's left front tire pointed to the right and nearly perpendicular to the direction of travel.  The amount of smoke it was generating as The Iceman tried to nurse it back to the pits was dramatic to say the least.  Verstappen looked okay for the most part, except for a spray of sparks issuing from underneath the front of the car.  Both drivers would retire very soon after.  Behind them the McLaren of Indy Alonso, who qualified a miraculous seventh, was boinked by the Williams of Felipe Not Retired Massa, forcing him through the gravel of the next turn.  The McLaren was undamaged but lost quite a few places and could never challenge for points as a result.  Meanwhile, up in the stands, a young Ferrari fan was distraught by the retirement of one of his heroes. 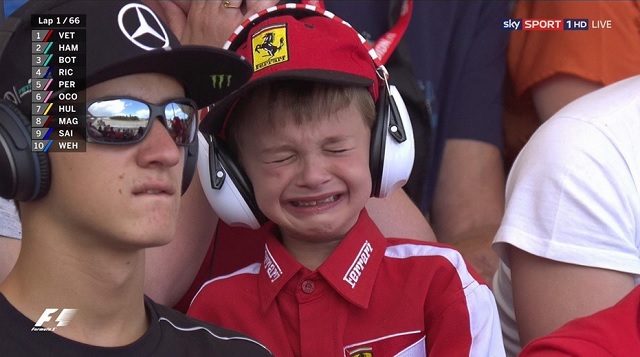 *MOTORING ON:  Vettel had the lead, it is true, but he could not manage to do much with it.  After getting a 2.50 second lead on the Merc, it held steady there.  However, it was that way solely because of Hamilton's efforts.  Around Lap 7 or so, he radioed in that it wasn't easy to keep pace with the German, and the effort involved in doing so was clearly audible in his voice.  Things looked interesting for the rest of the race.

*MIDWAY:  Vettel pitted on Lap 14, opting to put on another set of soft tires and coming out in fourth (quickly turning to third after passing Ricciardo) some 11+ seconds behind Bottas in second.  Hamilton stretched his softs out to Lap 21, by which point he was losing great gobs of time to the fresh-rubbered Ferrari.  Crucially, Mercedes put him onto the medium tires.  He rejoined in third... at which point, Mercedes made the decision to have Bottas take one for the team.  It took Vettel a few laps to catch up to the Finn, but it took him three full laps to get by the defensive-driving Bottas.  The next lap, Hamilton breezed past his teammate with a thank-you thumbs-up, only some four seconds behind the Ferrari.  Bottas would pit on Lap 25, rejoining in third, but so far back he would never see the other two again.  The gap between Vettel and Hamilton would open to 6.1 seconds.

*TURNING POINT:  Some 10 laps later, the McLaren of Stoffelwaffle would be knocked out of the race by Massa, who apparently hates McLaren.  As the orange car was dragged out of the kittylitter, a Virtual Safety Car period was triggered.  Hamilton would pit at the very end of it, rejoining on Lap 37 in second place, and back on soft tires.  The next lap saw Vettel come in for the rules-mandated switch to medium tires.  Meanwhile, the Merc driver blazed around the circuit on cold tires trying to take advantage of his opponent's idleness.  It worked beyond anybody's wildest dreams.  Vettel returned to the circuit just as Hamilton was about to go past.  The two dragraced down to Turn 1, Vettel on the inside.  In the turn, the red car went wide, basically hipchecking his rival off-track in a legal but decidedly stiff move.  Hamilton would return to the track less than a second behind the Ferrari.  The chase was on.  Vettel, like Bottas before him, drove a very wide car indeed, never giving the Brit a chance.  Until, that is, Lap 44, when Hamilton got a perfect exit from the final turn and used the DRS advantage down the front straight to steam past Vettel.  Behind them, Bottas' engine, four races old, gave up the ghost with a sound like the turbo had ingested a ferret.  It was now a straight one-on-one fight, Mercedes vs Ferrari, lead driver vs lead driver.

*TO THE END:  While we here at F1U! like to be overly dramatic every now and again, it turned out that the race was over at that point.  Hamilton would open a three-second gap over Vettel, thanks to the soft tires on his car.  The Ferrari would not go away, though, and the Merc driver had to continue to drive as hard as he could.  All it would have taken was a single mistake for Vettel to regain the lead, but it was not to come.  Lewis Hamilton would cross the line about three seconds ahead of Seb Vettel.  Meanwhile, Smiley Riccardio would finish third for his first podium of the year.  The distance between the top two teams and everybody else was clear, however, as the Red Bull was over 65 seconds behind the leader.  The rest of the field had been lapped by the Hamilton/Vettel battle.

*A HAPPY ENDING:  Back in the middle of the race, Ferrari team members contacted the production team from FOM, asking if they could give them some information.  Soon after, we got to see one of the coolest F1 moments ever: 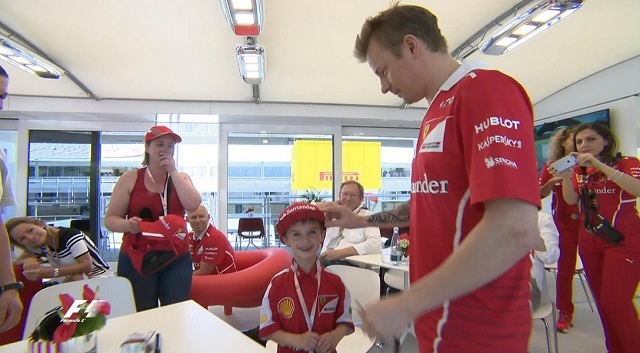 The team had found the crying kid and brought him and his family down to the Ferrari hospitality trailer and he got to meet Kimi Raikkonen, have pictures taken with the Finn, got his hat, the works.  It was a ridiculously sweet moment in a sport and team that has in the past often been quite standoffish.  The boy, who's name is Thomas, would also meet fellow Frenchman Lettuce Grosjean as well as getting to visit team Renault and Nico Hulkenberg.   I think we all know who's winning Show & Tell next time.

Next time, we are in Monaco for the crown jewel of F1... oh, and some oval race in the States, too.  See ya then!