F1 Update!: Singapore 2010 Dark clouds overhead but a brightly lighted track below, with the five points leaders sitting in the first five slots on the grid.  Sounds like a perfect setup for a great race, but is that what we got?  THIS is your F1 Update! for the 2010 Grand Prix of Singapore!

*LIGHTS OUT:  For once, the entire field made it away and through the first couple of turns without serious incident.  Felipe Massa made a fantastic start from his grid position in Palembang, catching up with the rest of the field very quickly.  However, all was not well amongst the thundering herd.  Vitantonio Liuzzi earned himself a Mooooooo-oove of the Race nomination by managing to run into both ends of Grizzly Nick Heidfeld's Sauber on one pass.  Heidfeld had to limp around to the pits, while Liuzzi's Force India struggled to complete the first lap, so it came as quite the surprise when he blew right past the pit entrance.  However, Felipe Massa didn't, intentionally.  He came right in at the end of the first lap and changed from the soft tires to the harder compound, gambling on a risky strategy.  And why not?  It's not like he'd fall any further behind.  But Ferrari didn't account for the incompetence of Vitantonio Liuzzi.

*SAFETY CAR:  Liuzzi zipped past the pit lane and began Lap 2.  He never completed it.  His suspension, showing obvious signs of damage from his mugging of Heidfeld, gave out and he came to a halt out on track... at a point on the circuit where there weren't any cranes.  Out came the Safety Car, and out the window went everybody's strategy.  The back half of the herd pitted immediately, with the top 10 staying out... except for Mark Webber.  Webber rolled the dice and pitted, potentially putting himself in an excellent position.  If he could stay in contact with the leaders, when THEY stopped later in the race the Red Bull would leap high up the standings, potentially as high as first.

*RUNAWAY:  It quickly became clear that Webber was going to be racing for third.  Polesitter HWMNBN and Red Bull's Seb Vettel rapidly pulled away from the McLaren of Lewis Hamilton.  By Lap 20, the two had a nearly 15 second lead over the 2008 Champion and over 20 seconds over fourth place Jenson Button.  The lead kept widening as the two frontrunners took turns setting fast lap of the race as they tried to open up a big enough gap to pit and stay ahead of Webber.  Hamilton blinked first, coming in on Lap 29 after he had run his tires into the ground.  Mark Webber swept past as Hamilton crawled down the pitlane to return to the race.  On Lap 30, HWMNBN, Vettel and Jenson Button in third pulled in for new tires.  The Ferrari driver came out first, despite Vettel having a faster pitstop... until the Red Bull driver tried to exit his pitbox in 2nd Gear.  Once again, the young speedster choked under pressure, with a chance to take the lead in the balance.

*BUT THEN:  If F1 fans didn't love Gandalf Kobyashi before today, when he hip-checked Slappy Schumacher into the next neighborhood they had to begin feeling all tingly.  A rookie asserting himself on the Great Schumi?  That's just beautiful.  However, a lap later saw Gandalf fishtail himself into the wall but hard, coming to a stop on the racing line just out of sight from cars coming down on him.  The HRT of Bruno Senna, the first car to come across the broken Sauber, arrowed right into the side of Gandalf.  Felipe Massa, showing the sort of reflexes that one expects from frightened cats, barely avoided adding to the carnage.  Another Safety Car comes out as the track marshals try to figure out how to untangle the wrecks.  The restart came on Lap 36, with the standings reading HWMNBN, Vettel, Webber, Hamilton, and Button.

*SAY GOODBYE TO A CHAMPIONSHIP:  While HWMNBN and Vettel had clear track in front of them, somehow the Virgin VR-1s of Lucas DiGrassi and Timo Glock had gotten gathered up by the Safety Car so he was sitting directly in front of Webber... and this is one of the few places that F1 could take lessons from NASCAR.  In NASCAR safety car situations, the field is lined up in order of standing for all intents and purposes.  In F1, the field bunches up in whatever order they get to the Safety Car.  Webber and Hamilton got past Glock, but DiGrassi balked the Australian quite badly.  Hamilton, taking advantage, pulled right tight behind the Red Bull then swept past on the outside.  Everything was to the advantage of the McLaren as they approached the next turn: he had the racing line AND he was clearly in front of the Red Bull.  Webber, however, saw an opening that truly wasn't there and smashed hard into Hamilton, deranging the MP4-25's suspension while the RB-6 continued on merrily.  Hamilton made it into a run-off area and, furiously throwing his steering wheel into the night, retired from the race for the second time in a row.  Unlike at Monza however, this time wasn't his fault.  While the stewards declared it a "racing incident," replays pretty clearly showed that Webber wouldn't have made the turn if he hadn't hit the McLaren.  The Red Bull did sustain some damage, picking up what was later described as a nasty vibration, but Hamilton's chances for a second Driver's Championship suddenly look grim indeed.

*THE ENDS:  Ahead of the carnage, HWMNBN and Vettel pulled away again, continuing to exchange fast lap between the two of them for the rest of the race.  While the Ferrari held the lead, the Red Bull wasn't letting it get away in the least.  Eventually, they swept across the finish line only 0.2 seconds apart, one of the closest finishes in recent memory.  All wasn't calm behind them, though.  Robert Kubica had managed to get himself to 7th place, but drove the tires off his Renault... literally.  On Lap 46, he had to pit for new rubber, his right-rear tire showing the canvas backing in some places.  He dropped to 13th by the time he returned to the track... and thus began one of the better drives we've seen in a while.  On Lap 52, he passed Buemi for 11th and his Renault teammate Petrov for 10th, and pulled up to Massa, whom he passed on Lap 53.  On Lap 55, Kubica passed Force India's Adrian Sutil for 7th, regaining the position he relinquished when he pitted.  Just awesome driving from the Pole.  And then there's the Heikki Kovaleinninninnie story.  On Lap 59, the Finn and Seb Buemi bump, with the Lotus ending up pointing the wrong direction but able to continue.  Unknown to the Finnish driver, the contact caused a small fuel leak in his Lotus.  By the time he made it to the front straight, his engine was fully aflame: 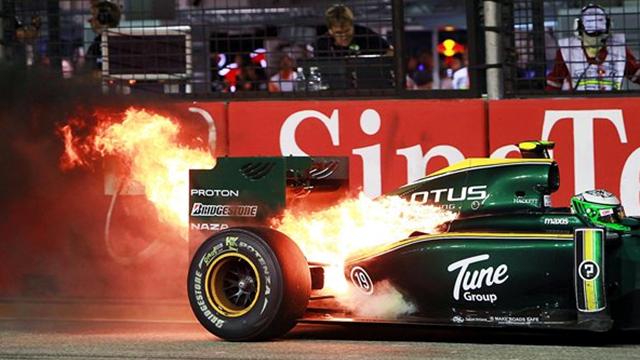 Understandably unwilling to bring a blazing car into the pitlane, Heikki instead pulled to a stop just short of the start/finish line.  Once the Lotus stopped, the rear of the car went up like a molotov cocktail had been thrown at it.  Unfortunately, the pitlane fire crew wasn't near his stopping point.  However, Heikki himself grabbed a fire extinguisher and began to fight the blaze. 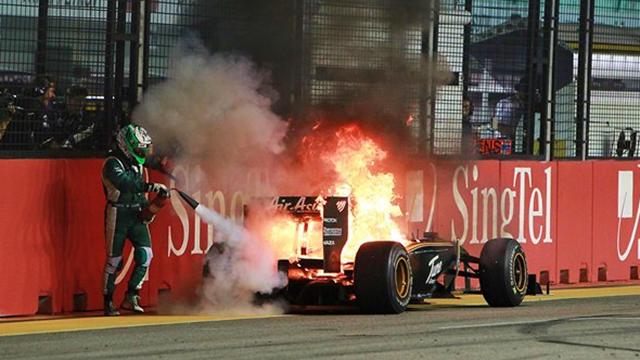 The Lotus was pretty much toast by the time HWMNBN and Seb Vettel ended the race, the smoldering car a dramatic counterpoint to the victors.

*DRIVER OF THE RACE:  HWMNBN and Seb Vettel both deserve this award as the two of them drove flawless races.  The Ferrari driver, however, pulled off the rare F1 Grand Slam: pole, win, fast lap, and he led every lap of the race.  Yeah, that's pretty dominant.

*TEAM OF THE RACE:  Red Bull.  2nd and 3rd, retaking the lead in the constructor's championship, and one of your men leading the driver's championship?  Yeah, pretty good race for the team.

*MOVE OF THE RACE:  As previously mentioned, Robert Kubica pitted from 7th late in the race and then fought his way back up to regain the position relinquished.  What was really impressive was the pass on Adrian Sutil to complete his quest, passing the Force India driver on the outside of the 90-degree Turn 7 at the end of the longest straight on the track.  Well done for the Pole, and maybe enough to earn him a drive for Ferrari next year... or so the rumors say, anyway.

*MOOOOOOOOOO-OOVE OF THE RACE: Grizzly Nick Heidfeld was happy.  He was finally back in a F1 car for real, and had proven that he hadn't lost anything in the meantime.  The first lap had gone swimmingly, and things looked good for the rest of the race... maybe even points!  And then Vitantonio Liuzzi came along and did bad things.  First the Force India driver slammed into the rear of the Sauber.  In one swift mooooo-oove, Liuzzi went past the damaged Sauber, then cut back across Heidfeld's nose, sending pieces of it flying off into the night.  That's right, Liuzzi somehow figured out how to damage both ends of the Sauber in one move, without sending it into the wall.  Pretty impressive, and quite the Moooooooo-oove!  Heidfeld, his downforce compromised, ended up in the walls around Lap 30 or so.  Liuzzi, in a case of just desserts, retired his car on Lap 3.

"Go ahead, tell me which driver the team is going to back for the Championship." - Seb Vettel

"Don't count me out yet... I had the most boring exciting race ever, and I'm still in the hunt." - Jenson Button

"The only time you saw me today was when I was getting passed by someone... yet I ended up 5th.  Something doesn't jibe here..." - Nico Rosberg

"Brake problems kept me from catching up with Rosberg... but boy, did they look cool on TV!" - Rubens Barrichello (note: his brake pads were glowing nearly white at some times... and yes, they really did look neat.)

"It was good fun picking them off one by one." - Robert Kubica (note: real quote.  Sounds like a mass murderer, doesn't he?)

"Considering that I started from another country altogether, across a stretch of Pacific ocean, I'll take this finish." - Felipe Massa

"I have no idea if I really finished 9th or not." - Adrian Sutil (note: penalized 20 seconds for some infraction or other)

"I have no idea if I really finished 10th or not." - Nico Hulkenberg (note: also penalized 20 seconds for some infraction or other)

Everybody else finished a lap or greater behind, so I give them all a "Meh" and leave them at that... except for:

"That was not quite how I thought my race would end!  I told Tony and Mike that they maybe need to pay me more as I’m now a fireman as well…" - Heikki Kovaleininninninnie (note: real quote)

Japan in two weeks, see you then!

One fire extinguisher that size ain't gonna be enough to put out a blaze that big. What happened after that? (And where did he get it from? surely they don't carry them in the race.)

Did Massa finish in the points?

2 Massa finished 8th, so yes, he got some points.  A fine finish for him, particularly considering that his early pitstop strategy got trashed by the first safety car.

The fire extinguisher that Heikki used was handed to him by a Williams mechanic.  Believe it or not, it alone pretty much put out the fire!  Two marshals came along a few seconds later and turned the Lotus white with their equipment, but there was no visible fire at that point.  All praise to Heikki!

3 That loser Petrov is out of points again. The only comfort must be that he's faster than Schumacher.

4 I suspect you won't have to be worrying about him too much longer, Pete.