F1 Update!: Monaco 2017 A brilliantly perfect day in the Principality greeted the Circus as they made their way through the streets of a small French fishing village, heading to the starting grid of Formula 1's premiere event.  Ferrari hadn't won here in an unbelievable sixteen years but had a front row lockout today, Kimi Raikkonen over Seb Vettel.  Behind them were the Red Bulls of Embryo Verstappen and Smiley Ricciardo, separated from the two cars from Maranello by the Mercedes of Valterri Bottas.  Would church bells be ringing in Italy?  Would energy drinks be spilled in Austria?  Would slide rules be set down for a moment in Germany?  THIS is your F1 Update! for the 2017 Grand Prix of Monaco!

*LIGHTS OUT:  Ste. Devote, the first turn at Monaco, is rather notorious for its ability to cause havoc at the start of a race.  It's quite common to see one or more cars crash out of the race there, nose buried deep into the pillow-covered armco, while the rest of the field scrambles to get out of the way.  Not this year: everybody made it through the first lap clean and clear, with no position changes anywhere.  It took nearly ten laps for much of the field to start to spread out, with the two Ferrari drivers opening up a six-second gap to Bottas.

*EXCITING AND TENSE:  Those two words do not apply to what was going on in Monaco today.  It's notoriously difficult to pass on the narrow streets of the Principality, but now that the cars were 8" wider with wider tires and greater grip, it was proving to be nigh-on impossible.  Thus we were treated to nothing less than a high-speed parade.

*IT'S THE PITS, MAN:  It is an immutable fact of Formula 1 that, in a team, the car ahead will pit first, before the car behind.  This is usually an advantage for the leader for different reasons.  For both Ferrari and Red Bull, that's how it worked today: Verstappen hit the pits on Lap 32 for his only stop, Raikkonen on Lap 33, Ricciardo on Lap 38, and finally Vettel on Lap 39.  In both cases however, the second car came out ahead of the first car.  Raikkonen went from a two second lead to being a second behind after the pit rotation, Verstappen wound up in fifth, shuffled back behind Bottas while his Australian teammate ended up in third.  When the Legendary Announce Team said that "the conspiracy theorists will be saying that Ferrari engineered the position change," they were only saying what everybody was thinking.  That's the way it's done in F1.

*WHOOPS:   Jenson Button was having what could only be considered a successful race in his borrowed McLaren.  Taking over Fernando Alonso's seat while the Spaniard was racing in the Indianapolis 500m, Button was within range of a points-paying finish.  All he had to do was get past Pascal Wehrlein and he'd be a cinch to eventually end up in 10th.  The problem was, Wehrlein had no interest in letting the Brit go traipsing past.  The cameras cut away to watch something else.  A few laps later, we were treated to this view:

It was quickly realized that this was Wehrlein's Sauber, leaning up against the barriers at Portiers.  The good news is that this is a very slow speed corner, the bad news is that F1 cars never end up on their sides so the marshals had not the first idea of what exactly to do, there's no procedures for that.  At least, that's the way it felt as it took seemingly forever to get the Sauber back on its wheels and Wehrlein out.  The German took a ride in the Medical Car as a safety car period was called, but this was mostly a formality: he was fine.  It took only a moment or two for people to wonder where Button was.  It turned out that he was in the run-off area passed the exit of the tunnel.  He had made what could charitably be termed an "optimistic" move to the inside of Wehrlein and interweaved tires with him.  Wehrlein ended up heading for the harbor, while Button suffered a broken suspension.  Amusingly, he was handed a three grid spot penalty for the next race and two points on his Superlicense.  Of course, this was a one-off race for (now most likely) permanently retired Button.

*TO THE END:   The safety car bunched the field back up, of course, but the restart went the way they usually do: the leader got away scot clean.  This was, shall we say, rather unsurprising, given Ferrari's suspected tinkering with the standing earlier.  The field stayed the way it had been for a while: Vettel over Raikkonen, Ricciardo over Bottas over Verstappen.

*POST-RACE:  Somebody is not happy at Ferrari. 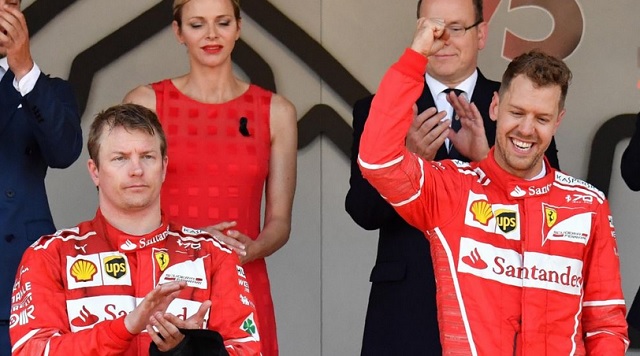 Reports are that Raikkonen's engineer was throwing a serious fit in the garage after the race.  On the podium, Kimi's face looked very much like he had just been handed a three-week dead ferret.  It's clear that he has his opinions as to what happened out there.

*OH YEAH:  Over in Monaco's sister city of Indianapolis, Fernando Alonso made a great showing at the Indy 500.  He spent the entire race in the top 10, led a good number of laps, and was in contention to win when his Honda engine let go.  That was the second Honda-powered car to retire with a bum engine, which makes it clear that it isn't just their F1 engines that have reliability problems.  As previously mentioned, Takuma Sato went on to win, much to F1U!'s pleasure.

The next race will be at Montreal in two weeks!  See ya then, eh?

1 It's so weird that Honda is having engine reliability problems on their motorsports side, what with the reliability of their consumer engines

2 Max did have another "stop" - under safety car, he switched back to the softest (ultra? The purple ones) in a desperate hope of getting past Bottas. But that was not happening on that track.
I don't see how Ferrari could have predicted that Vettel would have put in those blistering laps on worn tires and gain so much he could come out ahead of Kimi (who wasn't even in sight when Vettel exited the pit). Kimi is in the same car - what was stopping him from putting up those times?