F1 Update!: Monaco 2009! A glorious day in Monte Carlo, a sunny sky greeting the F1 Circus as they lined up on the grid.  Would Jenson Button continue Brawn's dominance?  Would Ferrari mark their territory?  Or would Sebastian Vettel return to the top of the podium?  THIS is your F1 Update! for the Grand Prix of Monaco!

*RUNAWAY:  For all intents and purposes, the race was over when the tire covers came off for the formation lap.  Every car in the field opted to begin on the "hard" compound for their first stint... every car except for Button and Barrichello, the Brawn Boys.  The softer tires were faster, true, but they were known to go bad after only a few laps, and the speed gained from them wasn't all that much.  The "hard" tires were considered the way to go, all in all.

But nobody told the Brawn Boys.  Button cleanly stayed in the lead when the lights went out, and Barrichello blew the doors off of Raikkonen's Ferrari to take 2nd into Sainte Devote.  Then, poof, the race was over as the two disappeared into the sunset.  By the end of the first lap, Button has a one-second lead over his teammate, and a three-second lead over Raikkonen.  By the end of the third lap, it was a nine second lead over the Ferrari.  The Ferrari thinking had to be let them run, when their tires go off around lap 9 we'll catch 'em.

But they didn't go off until lap 13 or so.  When Button's lap times started to climb precipitously around lap 15, he pitted and got on the hards... and only a couple of laps later, the Ferraris came in, out of fuel.  Race REALLY over.

*REBIRTH:  For all that the Brawns made it look simple, Ferrari got everything right today and found themselves on the podium for the first time all season, and both cars earned points for the first time all season as well.  We won't know if they're really back until Turkey in two weeks (Monaco isn't a fair judge of car pace), but they're at least pointed in the right direction.

*REGRET:  The BMW and McLaren freefall continued.  Kubica DNF'd with brake failure, Kovaleininninninnie crunched the barriers near the Swimming Pool, Hamilton finished 12th, and Nick Heidfeld was probably thrilled to finish 11th.  No points, and may St Fangio the Quick have mercy on your soul.

*DRIVER OF THE RACE:  Jenson Button.  What can be said about his drive?  On a track that punishes even the slightest mistake with a ride on the crane, Button was perfect, and was never threatened as a result.  Except for the end of the race, when he turned his car off in Parc Ferme instead of the traditional Monaco location of in front of the Royal Box.  He then had to jog the entire length of the pit lane to get to his podium.  Oops.

Button sets a higher top speed than the BMWs
*TEAM OF THE RACE:  Ferrari.  Raikkonen in third with the team's first podium of 2009, and Massa in 4th?  Considering the way their season has gone, Maranello has to be going nuts.

*MOVE OF THE RACE:  On Lap 12, Felipe Massa was sitting in sixth, stuck behind Seb Vettel who was having some handling problems.  Coming out of the tunnel, the Ferrari was parked right under the rear wing of the Red Bull, and through the Nouvelle Chicane he stayed there.  Into the Swimming Pool complex, Massa ignored conventional wisdom that says that you can't pass into Tabac.  He got on the inside of Vettel, crossed his fingers and forced his way in.  Truthfully, it was a move that wasn't required; the Red Bull was having a bad day and would crash out a few laps later.  Still, it was a very gutsy manuever and a well-earned MotR.

*MOOOOOOOO-OOOVE OF THE RACE:  Other than Button's finishing faux-pas, the clear winner of the Mooooooo-ooove has to be Toro Rosso's Sebastian Buemi.  On lap 11, he was following closely behind Nelson Piquet Jr.  In preparation for a pass, Buemi tucked into the Renault's slipstream heading into Sainte Devote.  Then Buemi got distracted by something shiny, perhaps some of the jewelery on display in the grandstands, and neglected to slow for the turn at all.  The result was... interesting: 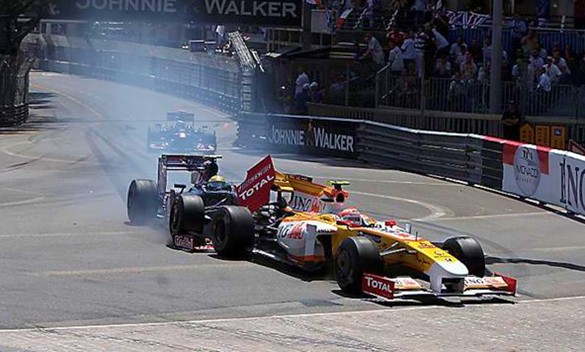 He wound up getting into the rear of Piquet and simply bulldozed him into the runoff area.  While Piquet got free in time to avoid the tire barrier, Buemi just kept right on going into the wall, burying himself wheel-deep.  Both cars were out of the race... lovely job, Buemi!  Well done!

"Right, seems obvious that I'm not going to win a damn thing this year.  Great.  At least I know where to put my car after the race." - Rubens Barrichello

"I don't know what I was thinking when I passed Vettel.  Good lord, I'm a madman." - Felipe Massa

"I couldn't stealth my way onto the podium this time.  Drat." - Mark Webber

"We're fast in practice.  Great.  Can we maybe be fast in a flippin' race for once?" - Nico Rosberg

"This weekend sucked.  How I ended up 10th is a miracle." - Timo Glockenspiel

"We gave everything today but we were too slow here.  And at the other five tracks we've raced on this season.  And probably all the rest of them, too.  In fact, we'd probably be slow at Talladega, Indianapolis, or a dragway." - Grizzly Nick Heidfeld

"I was thinking about one of the Rocky films - in the first film, Rocky says, ‘I just want to see the end of the fight’ and I got to the flag." - Lewis Hamilton (note: real quote.  It appears that all the losing has finally driven him crazy.)

"Now this difficult weekend is over we have to forget about it and focus on the next race when I am sure we will be much more competitive.  Or else there'll be a lot of Toyota executives in Japan sharpening their wakazashis and practicing their final calligraphies."- Jarno Trulli

"I'd've been fine if I hadn't've been hit by Heidfeld.  How that slow car hit me is beyond me."- Adrian Sutil

"15th isn't great, but it's better than my dad ever did here." - Kazoo Nakajima

"We had difficulties over the whole weekend." - Robert Kubica (note: gee, ya think?)

And so ends the crown jewel of the Formula 1 calendar.  Next time, we'll be in Turkey and the good folks at Force India are supposed to have a double diffuser AND KERS.  Look out, world!

Loved the race.  Loved the weather.  And loved the Ricky Bobby moment at the end.

This season has been a nightmare for Hamilton. But even the best driver can't do anything when his car sucks.

I know Barrichello would love to win one, but the one thing he cannot do is make a risky attempt to past Button. If he does that and blows it, running one or both cars into a crash, he'd be an idiot.

It's interesting to compare Barrichello's performance to Button's. They're driving essentially the same hardware, aren't they? Sometimes the team has varied their start configurations (different tires, different fuel loads) but not always, and Button has been leaving Barrichello behind. The difference has to be driver skill. It's obvious that Button is a good driver whose mediocre performance in seasons past has been because he just couldn't get a decent ride.

I hope he enjoys this season, because with all the rule changes for 2010 there' s no guarantee whatever that Brawn won't drop to the back of the pack again. Their engineers aced it this year, though.

In the meantime, Hamilton must be moaning, "Someone wake me from this horrible dream!"

3 But even the best driver can't do anything when his car sucks.
Mm.  HWMNBN dragged a mediocre car onto the top step of the podium twice last year, a position it had no place being.  I think, in the history of F1, it can be shown that the best drivers CAN take a third-rate car and make hash with it.

Jenson Button is a decent driver that runs very well when given a good car... but hand him a bad one, like last year, and he'll emphasise all its faults.

That doesn't make him a bad driver, not in the least.  He's just not a truly special one.  I think if you put HWMNBN in the Honda last year, he would have been able to score more points than Rubens Barrichello.  Same with Lewis Hamilton or (possibly) Seb Vettel.

I think that, with the retirement of Slappy Schumacher, we entered a "golden age" of F1 drivers.  Consider: Hamilton, Kimi Raikkonen, and HWMNBN are all Driver's Championship holders, Felipe Massa may as well be after 2008, Robert Kubica and Vettel are stars that probably will win a championship or two each (if Hamilton lets them), Nico Rosberg probably could as well, Adrian Sutil ran neck-and-neck with Hamilton in GP2 (where they had essentially identical cars).

Hamilton, Kubica, Vettel, Rosberg and Sutil all have less than three years of experience in F1.  If there's any justice in this world, we'll be seeing them for 10 seasons more, at least, and I wouldn't put any money down on which of them will be considered the best of the bunch at the end of their careers.  Throw in names like Bruno Senna and Nico Hulkenberg and current F1 driver Seb Buemi (who isn't yet 21) and you begin to realize the talent we've got right now.

If you put any of them in a similar car up against Button?  I think he'd come out second best (Senna and The Hulk excluded; haven't seen enough of them to judge).

4 I'm definitely enjoying watching Button work his way towards a Championship. It's almost like watching karma at work. I'd beg to differ regarding a great driver not being able to do anything with a poorly preforming car... Senna definitely forced a few wins out of cars that weren't the best on that specific day. It's what made him great! I'm lovin' this season, and Monaco is always an event!