F1 UPDATE!: Monaco 2008! Monaco is called "the crown jewel" of Formula 1, but generally the race itself isn't all that exciting.  Not this time!  THIS is the F1 UPDATE!

*IT'S RAINING AGAIN...:  Take everything you know about F1 racing at Monaco, cover it with water, then throw it out and hang on.  Best race of the season so far, no contest.  As the cars sat on the grid just before the parade lap, nobody knew just exactly what the weather would bring.  The track was damp and drying, but Formula One Management was saying "rain in 15 minutes".  Everybody went safe and chose intermediate rain tires, but Kimi Raikkonen and Ferrari couldn't make up their minds fast enough, saddling him with a drive-through penalty early.  Once the race began, though, everybody made it through the first turn safely and it started to look like just another Monaco...

...and then it began to rain, and the F1 UPDATE! crew began to laugh.  More nose changes than you'll see at a Hollywood movie premier.  Lewis Hamilton fishtailed into the wall and blew a tire, but no suspension damage.  It looked like his race was done, and it would have if it wasn't for David Coulthard's Chin kissing the wall, then being rear-ended by SeaBass, bringing out the Safety Car.  Suddenly, everything was back to square-one.  Massa lost it on the one place on the course with run off area, Ste Devote, and dropped back, putting BMW's Robert Kubica into the lead.  After the first scheduled pitstops, though, Hamilton had the lead.  That early pitstop to change his blown tire began to look like a godsend.  And so it was, as he took his McLaren home to the win, followed by Kubica and Massa.  In between, though, the rain stopped, and it became a guessing game.  A late Safety Car put the whole race in doubt again, as Hamilton and Kubica were on hard-dry tires, while Massa was on the softs and kept it close, to no avail.

*POINTS FOR EVERYBODY!: Seven teams earned points today, with McLaren being the only manufacturer to get both cars in the top eight (1st for Hamilton, 8th for Heikki).

*TIME OUT:  For the first time in who-knows-how-long, a Formula 1 race was ended by time limit, not by finishing every lap.  F1 races have a maximum time of 120 minutes, y'see, and when the rain came, everything slowed down.  When the time expired, there were still two laps left.

*DRIVER OF THE RACE: No, not Lewis Hamilton, though at any other race he would have won it.  F1 UPDATE! is proud, however, to give the DotR award to someone that we wouldn't ever have guessed we be giving it to... Force India's Adrian Sutil.  Throughout the weather, Sutil showed that he's got awesome driving skills in the wet as he worked his way through the field... and with a few laps left, he was sitting in a no-kidding, for-real fourth place, with a legitimate shot at a podium to boot.  Then, through no fault of his or his team's own, it all turned to ashes....  It's small consolation, Adrian, but you, far and away, deserve the Driver of the Race award.

*TEAM OF THE RACE:  Nobody.  We can't give any team praise this race.  Everybody had problems this time around, from McLaren's Heikki Kovaleiniinninninnie stalling on the grid to Ferrari not being able to decide on a tire for Kimi to BMW botching the setup on Grizzly Nick Heidfeld's car to Renault deciding to go to dry tires a few laps early, while teams like Williams or RedBull did nothing to distinguish themselves, earning their points merely by surviving.

*MOVE OF THE RACE:  It's always a tense moment.  The lead car(s) are lapping their way through the field, when they come up on two (or more) cars battling for position.  The trackside marshals throw up the blue flag, telling the slower cars to move aside for the leaders.  The problem is doing it without surrendering an inch to the cars you're fighting.  In this case, Massa came up on Jenson Button and Nico Rosberg on the run down to the hairpin.  Button and Rosberg moved over to let Massa go by, everybody braking all the while.  Rosberg, however, jumped behind Massa, and stuck his nose under the Ferrari's tail (so close that is Massa touched the brakes any harder, Rosberg would have been in the cockpit with him), preventing Button from getting back inside.  Perhaps an ungentlemanly move, but perfectly legal (and sneaky as all hell).  For that, Rosberg, you deserve the MotR!

*MOOOOO-OOOVE OF THE RACE:  We understand that F1 is hard.  Very hard.  So hard that it makes idiots out of the best drivers in the world.  That's why we created the award that celebrates the bovine in every driver, the Mooooo-ooove of the Race.  To begin with, the F1 UPDATE! crew wanted desperately to give the Moooo-oove to Kimi Raikkonen for losing control of his car and spearing into the rear of Adrian Sutil's Force India, ruining the outstanding 4th place Sutil had in hand and forcing them both into the pits (and crushing Sutil's suspension).  It would have served him right.

However, cooler heads prevailed.  Instead, the Mooo-oove goes to an earlier case of stupidity.  HWMNBN had been following Grizzly Nick Heidfeld closely for a couple of laps, almost being able to pass, but not quite.  Now, it's quite difficult to pass at Monaco, but there ARE some places to do it.  For the most part, however, the hairpin is NOT one of them, not without some assistance from the car ahead of you (see: Button, Rosberg, Massa, Move of the Race).  HWMNBN, perhaps realizing that he didn't have a chance in hell of doing anything this race anyway, decided to force the issue.  He sauntered inside of the BMW by not braking, then couldn't make the turn.  The result was not pretty: 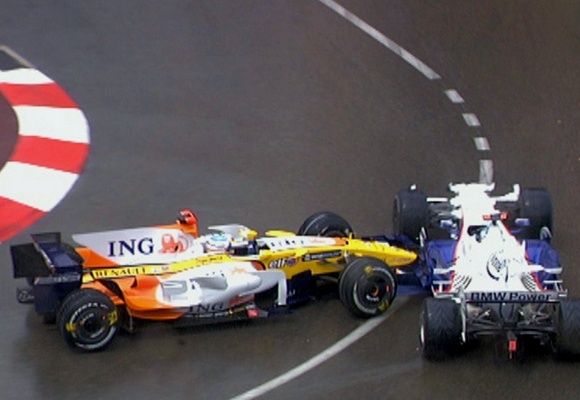 Heidfeld, in fact, wound up forced into a spin, banging back into HWMNBN.  This brought both cars to a dead stop, blocking the entire track and bringing six or eight other cars to a complete halt on the streets of Monaco.   Completely pointless pass attempt that nearly ruins your car, someone else's car, and turns "race" into "park"?  Well done, HWMNBN, here's your Moooooo-ooove!


"I am shooting the moon!  No wait, I'm over the moon!  That's what I meant!  This is the highlight of my career." - Lewis Hamilton (note: mostly real quote.)

"I am happy with the result." - Robert Kubica (note: real quote.  We've never seen anybody look less happy after taking second in a F1 race)

"I can't even begin to tell you how cool it is to finish 4th, particularly since I have no idea how it happened." - Mark Webber

"Now who's saying 'bringing out the new car at Monaco is stupid', eh?" - Sebastian Vettel

"Points!  It's been so long that I don't remember what it's like anymore!" - Rubens Barrichello

"I couldn't get it into gear at the parade lap.  Dammit." - Heikki Kovaleinninninnie

"Well done to Rubens.  Crepe race for me." - Jenson Button

"Lousy race for me, but at least I gave the viewers at home a cool shot from my onboard cameras when I spun out." - Timo Glock

""I can't believe it, it was so close. It feels like a pain in my heart. It is like a dream gone to a nightmare - suddenly you are in the car and it looks all fantastic, then you have to accept it is not going to happen. We had a really good strategy and it seemed to work and we were so close to the podium and the points. It was after the restart after the final safety car that Kimi had a problem under braking and crashed into the back of my car. The race was over and it was a real shock. A few tears came out as the adrenaline was high - I just can't explain it.  That right bastard." - Adrian Sutil (note: mostly real quote)

"I wonder if I'm going to have a drive after this?" - Nelson Piquet, Jr

"Hell, I could have done at least as good as HWMNBN or Rosberg." - Takuma Sato

"I'm willing to bet that there's no WAY I would have been run over in the pit lane if I was in F1." - Danica Patrick

Helluva race, for once.  Let's hope Montreal is at least as fun in two weeks!  Of course, we'll be all over it, and you will be, too... see ya then!

I think Vettel has to get honorable mention for Driver of the Race. Starting in 18th position and finishing 5th ain't too shabby, no matter how he did it.

And I think it's only a matter of time before Kubica wins one. He's definitely the real thing this season.

I bet Jr. Piquet is getting nervous with all the talk about driving for his job--and giving hope to Franck Montagny.