A low, heavy sky and thin sunlight greeted the Thundering Herd as it formed up on the grid.  Reports were that rain was in the near future.  Would it affect the race for the Constructor's Championship?  Would the McLaren Resurgence continue?  Would we ever hear from Ferrari again?  And now that he had wrapped up the Driver's Championship, whither Vettel?  THIS is your F1 Update! for the 2011 Grand Prix of Korea!

*LIGHTS OUT: It's a very short dash from the front of the grid to the Turn 1 / Turn 2 pairing at Korea, something on the order of 150m.  This favors the driver that can make a clean getaway off the line, as that counts just as much as raw acceleration on a short run.  Despite a fairly aggressive move from Seb Vettel, sitting second on the grid, McLaren's Lewis Hamilton held pride of place into the first turn and down the endless straight to Turn 3.  It wasn't until Turn 4, at the end of the next straightaway, that Vettel managed to take the lead from his rival.  From there, it became just another Seb Vettel sort of race: get clear of the field by at least a second before DRS usage was activated on Lap 3, then run away and hide.  And that's exactly what he did, though the lead in the first part of the race wasn't more than five seconds or so.

*CUE THE RAIN:  The men on the pit walls had a few anxious moments as the windows for the first pit stops began to open, as the sky began to spit rain here and there around the circuit.  Do you gamble on intermediate rubber, or stay on slicks and hope that the rain goes away?  Everybody rolled the dice to stay on slicks, and the rain, never more than a sprinkling around Turn 4, disappeared as quickly as it came.  Didn't stop the F1U! crew from cackling evilly though, as we hoped a good frogswallower would develop.

*SAFETY DANCE CAR:  When Renault's Red Menace decided that braking was for wimps on Lap 16, turning the rear of Slappy Schumacher's Mercedes into so much oatmeal in the process (see "Mooooo-oooove of the Race", below), a Safety Car was called out to allow the track workers to remove the debris.  After the restart on Lap 21, it looked like we were going to have a race again.  Vettel stayed ahead of Hamilton, but the lead was just a touch over a second... and the McLaren began to (agonizingly) slowly reel the Red Bull in.  However, Vettel's teammate Mark Webber also began to reel in the two of them.

*HELLO, GOODBYE:  On Lap 33, Webber went all furious koala on Hamilton, hanging onto back of the McLaren driver all the way around the circuit.  The two put on a tremendous exhibition of wheel-to-wheel racing from Turn 3, ending only when they came to the technical section around Turn 7.  However, this tete-a-tete let Vettel drive off into the distance, adding three seconds to his lead in one lap.  After the second round of pitstops, the Driver's Champion's lead had ballooned to 10 seconds and the race was, for all intents and purposes, over.  Hamilton and Webber pitted together, came out together, and their battle continued on Lap 34 (see "Move of the Race", below).  Vettel was unchallenged for the remaining 20 laps and took his 10th win of the season, followed by Hamilton, Webber, Button and HWMNBN.

*DRIVER OF THE RACE: Seb Vettel has already won the 2011 Driver's Championship, but it's clear that he isn't content to rest on his laurels.  All he did was take the lead in Turn 4 and then keep a fast Lewis Hamilton behind him until the safety car came out.  After the safety car period ended, he ran away and hid to blow the rest of the field off the track.  Pretty much the perfect race for the two-time champ.

*TEAM OF THE RACE: Red Bull.  Both drivers on the podium with a 1-3 finish, and clinching their second Constructor's Championship?  Yeah, not bad.  The only thing that kept this from being a perfect day for the team was a dumb strategy call to bring Mark Webber in at the same time as Lewis Hamilton that may have cost them a 1-2.  Still and all, if that's the worst thing that happened to Red Bull today, they'll probably live with it.

*MOVE OF THE RACE: McLaren's Lewis Hamilton and Red Bull's Mark Webber had themselves an epic duel today, one that lasted from the Safety Car period to the end of the race.  On Lap 33 the two pitted nose-to-tail and came out the same way to begin Lap 34.  Surprisingly, the Red Bull couldn't get close enough to pass at the end of the DRS zone, and it looked like that was that for this lap... until Hamilton locked up his brakes heading into Turn 5, and the furious koala pounced. 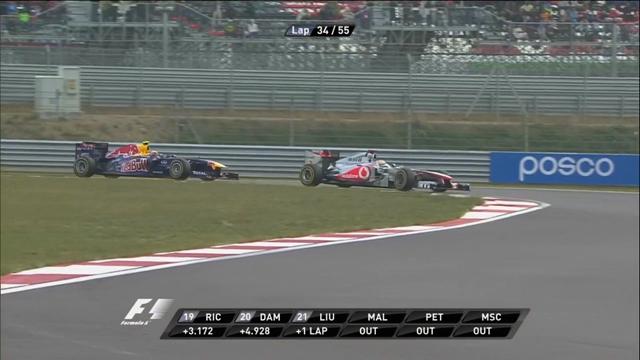 He took the inside line away from the McLaren into Turn 6, and again, it all looked over.  Surely the furious koala would pull away and set sail after his teammate. 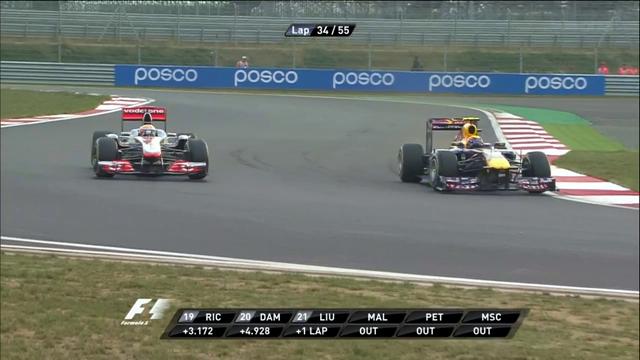 But no!  The McLaren dangled a piece of bamboo in front of the koala and squeezed him over into the next turn, retaking second place. 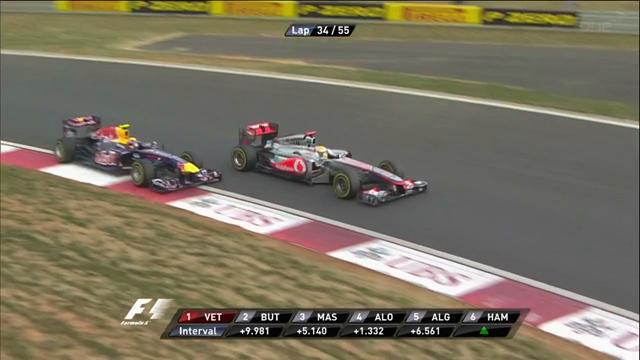 A simply exquisite piece of racing from both men, an exchange that earns them a rare shared MotR!

*MOOOOOOO-OOOOVE OF THE RACE:  Slappy Schumacher was cruising towards a solid points-paying finish.  To be sure, he had a hard-charging HWMNBN behind him, and Renault's Red Menace was looking awfully racy, but as the race neared the half-way point Slappy had to be feeling pretty good about the way his day was going.  Heading down to Turn 4, The Red Menace and HWMNBN were dueling hard, with the Ferrari driver apparently not planning on braking until he reached Pyongyang.  The Red Menace held off on braking as long as he could, then stomped hard on the slow-down pedal.  The brakes did their job well enough to lock up the front tires and the Renault was suddenly uncontrollable... with Slappy right in his way. 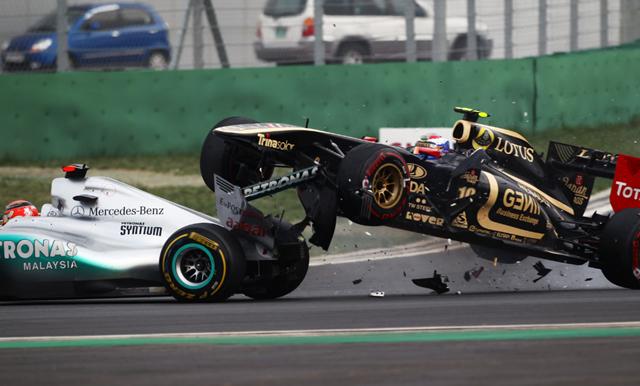 Both cars were taken out of the race, and The Red Menace nearly collected HWMNBN in the process.  Nicely done, Red!  Here's another Mooooooo-oooove for your collection!
*SELECTED DRIVER QUOTES OF THE RACE:

"I give up.  I give up." - HWMNBN (note: real radio broadcast during the race)

"Where's Hamilton?  I didn't get a chance to have him run into me, and I'm so lonely." - Felipe Massa

"It’s good to come away with a point, but ultimately we didn’t have the performance to match Toro Rosso today.  How disgusting is that?" - Paul di Resta

"Remember when people were saying I was going to be driving for McLaren and Ferrari?  What happened to those days?" - Adrian F'n Sutil

"My uncle Ayrton once suggested that I was the next great Brazilian racer.  Did you know that?" - Bruno Senna

"Wow, I almost passed the next great Brazilian racer at the Finnish line!  See what I did there?  I made a funny." - Heikki Kovaleinninninnie

"I am afraid that I have nothing interesting to say at this time." - Gandalf Kobayashi

"Why was Sauber the only team that had problems getting our tires to last?  We're usually the team that can do a one-stopper when everybody else is doing three!" - Sergio Perez

"If I hadn't've been so slow, I'm sure I could have passed the two Saubers like Heikki." - Jarno Trulli (note: what he really said was As soon as the blue flags started coming out late in the race I had to slow up, and if I hadn't had those problems I'm sure I could have finished with Heikki ahead of Kamui and Sergio.)

"At least I split the two Virgins.  That didn't come out right, did it?" - Daniel Ricciardo (note: the first part was a real quote)

"You could have bought me dinner first." - Custard d'Ambrosio

"I had heavy contact with a Virgin in Turn 4." - Vitantonio Liuzzi (note: sorry, we'll stop now)

"Why was there a pylon at the ENTRY to the pit lane, anyway?" - Kohen Maldonado

And so we leave Korea behind and head to the land of elephants and curry in two weeks!  We get to experience a new track, too!  We here at F1U! will be all over it, and we even expect to liveblog the first ever Practice session from the Buddh International Circuit!  See you in two weeks!

1 This was the race where everyone was expecting five pit stops, wasn't it? Interesting that it didn't turn out that way.

2 We're discovering that whenever the fear is that the tires won't last, they do.

3 It helps that the teams all went to the hard compound after the first stop, no? Evidently the difference in performance between soft and super-soft wasn't enough to justify an extra two pit stops...