F1 Update!: Japan 2010 Sunny skies on Sunday replaced the torrential rain from Saturday, but on whom would the sun shine the brightest?  THIS is your F1 Update! for the Grand Prix of Japan!

*RUMBLINGS:  The first indication that the hijinks of the Great Suzuka Pit Lane Boat Races had infected Sunday came as the cars were coming to the grid for the first time when from out of nowhere we saw a car spearing into the outside barrier at 130R. 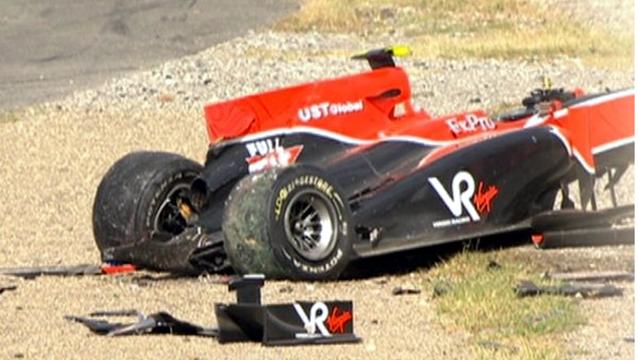 Virgin Racing's Lucas di Grassi said he "felt something break" in the rear of the car just before it went spinning off into the wall.  It isn't exactly common to have a car crash on the recon lap, but it isn't unheard of either.  Everybody took a deep breath, muttered "rookies" to themselves, and carried on.  Until the lights went out.

*TOTAL CHAOS: Everything up front was about as we've come to expect.  Seb Vettel led the thundering horde into Turn 1, but Mark Webber had another patented Red Bull Lousy Start™, letting Renault's Robert Kubica slip by into second.  But farther back in the pack everything was going straight to hell.  Nico Hulkenberg's Williams had a slow-ish start, sending cars on the left side of the grid behind him scrambling to avoid him.  Vitaly Petrov, charging hard from his grid slot, tried to thread the needle between Hulkenberg's car and someone else... and failed.  The results weren't pretty. 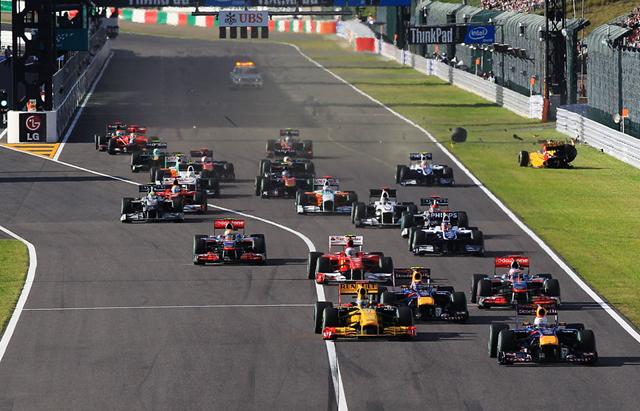 The Renault clipped the rear corner of Hulkenberg, then pirouetted across the Williams' nose on it's way into the Armco barrier.  Petrov was unhurt, but both cars were dead on the spot.  Meanwhile, Felipe Massa's Ferrari was in a jam... literally.  He was squeezed over onto the grass as he approached Turn 1.  The loss of traction sent him sprawling across the track, collecting the Force India of Vitantonio Liuzzi in the process. 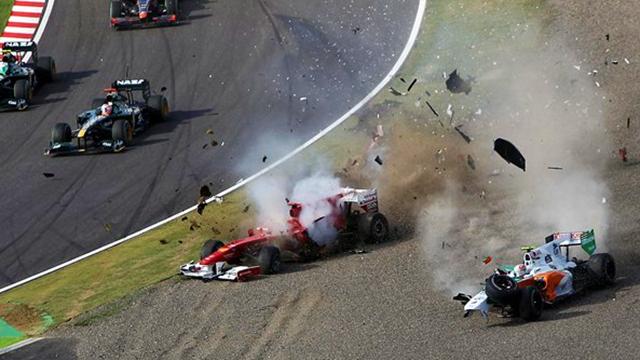 Five cars out of the race before the first turn was completed?  That's impressive, even for the naked confusion of a F1 start.  The Safety Car was called out and everybody took a deep breath.  "Well, that's over with, let's get on with it."  Except they were wrong.  While stacked behind the Safety Car on Lap 2, Robert Kubica suddenly pulled offtrack and came to a stop.  A look at the Renault mechanics showed nothing but confusion on their faces, but the Pole's body language simply radiated aggravation. 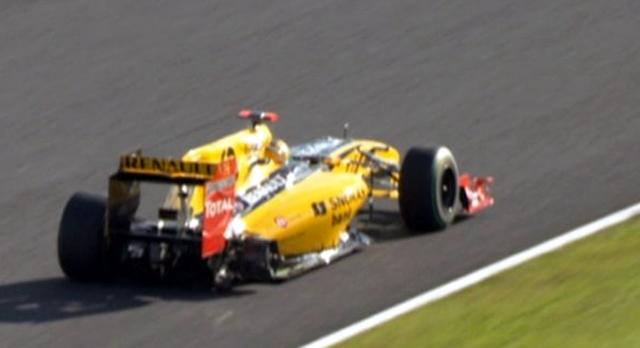 And for good reason.  His right-rear wheel had worked itself free from the axle and gone off into the Japanese countryside, ending his day and making everybody else wonder "what's coming next?"

*NOTHING AMAZING:  From there on out, the rest of the race was rather pedestrian.  McLaren's Jenson Button was running a strategy race rather than raw pace.  The only of the top 10 cars to have qualified on the hard tires, he needed to stay close to his teammate Lewis Hamilton, the two Red Bulls, and the Ferrari of HWMNBN.  When they pitted, he'd still have halfway decent tires to try and open a lead, then capitalize when he changed to the soft tires.  While he stayed close, he couldn't really stretch his lead enough to make a difference.  After he pitted, he rejoined in 5th, later taking passing his teammate for 4th when Hamilton's new gearbox lost third gear.  Up front, Vettel led Mark Webber across the line for the win, HWMNBN closing in fast for third.

*DRAMA:  Behind those first five though, there was enough excitement for any two races.  Gandalf Kobayashi started 14th and progressed through the field to end up 7th, making four or five passes in the Hairpin along the way.  The two Mercedes drivers, Nico Rosberg and Slappy Schumacher, raced each other hard for most of the second half of the contest making everybody wonder if there was going to be a pile of pewter-colored carbon fiber in our future.  Adrian Sutil blew one side of his engine going into 130R late in the race, put down a smoke-screen, spinning when oil from his car got onto his rear tires, recovered, blew the other side of his engine, put down another smoke-screen that any WWII-era destroyer would have been proud of, then coasted into the pitlane.

Tah-dah!
When Nico Rosberg's left-rear wheel flew off into the blue sky, it barely elicited a comment from the F1U! crew: "Eh, seen it already."  Quite the event-filled race, actually.

*DRIVER OF THE RACE: Gandalf Kobayashi hadn't driven on Suzuka Circuit in seven years, yet he had the most impressive performance of the day, picking up seven places in the process.  At one point, he was as high as 5th place and was holding up the much faster Lewis Hamilton in the process.  While 7th isn't all that impressive in the grand scheme of things, he beat his more experienced teammate Grizzly Nick Heidfeld, put on a great show, and may have solidified his hold on his race-seat for next year in the process.  Sometimes the Bantamweights outperform the Heavyweights.  Seb Vettel won the race, but Gandalf was more impressive.

*TEAM OF THE RACE:  Red Bull started 1-2, finished 1-2, got the fast lap of the race, led all but a handful of laps, and looked like they could dominate the rest of the season with one hand tied behind their back.  Yeah, that's a good result.

*MOVE OF THE RACE:  On Lap 45, Gandalf Kobayashi was 11th, but stalking Toro Rosso's NKOTT for 10th.  As they approached the Hairpin, NKOTT moved to the inside; Gandalf had used that line two other times to make passes and the Toro Rosso driver wasn't going to just give it to him again... which was exactly what the Wizard wanted.  Holding off on braking as long as humanly possible, and perhaps another instant longer, Kobayashi went around the outside of NKOTT.  The two cars touched once, then once more, both times due to the Toro Rosso pilot trying everything to hold the Sauber back, but Kobayashi made the pass work.  NKOTT ended up with a broken front wing, while Mr Wizard had a piece of flappy bodywork, but it wouldn't hold him back when he chased down Rubens Barrichello.  The best move in a race full of them from Gandalf.
*MOOOOO-OOOVE OF THE RACE:  You would think after seeing Renault's Robert Kubica lose an entire wheel assembly on Lap 2 of the race, all the tire changers would concentrate on getting everything done correctly, wouldn't you? 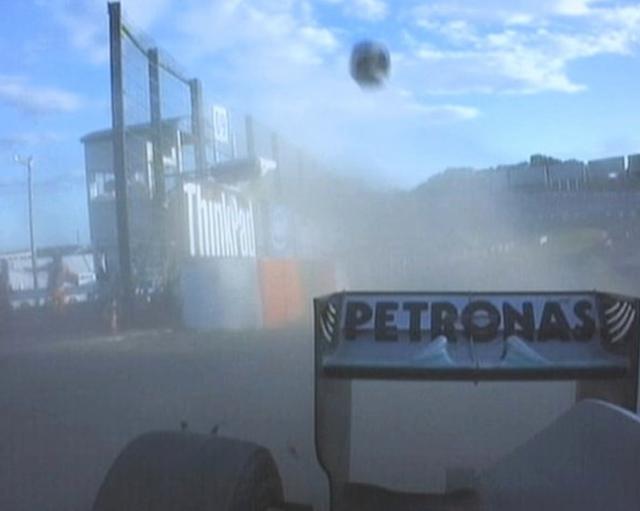 Apparently not.  Congratulations Mr Mercedes Mechanic, you just won the Moooooo-ooove of the Race!
*DRIVER QUOTES OF THE RACE:


"It doesn't seem like it, but I've only won three races this season.  But this is the first time I've ever gotten pole and the win on the same day!" - Seb Vettel

"All things considered, this is a good result for us today.  We had a bit of luck when Kubica retired, so we didn't have to worry about him, and it was easy after that.  Except for not winning, it was a solid team result.  Felipe who?" - HWMNBN

"On the plus side, I'm still in 5th in the Driver's Championship.  On the minus, I'm farther back than I was.  Call it a push." - Jenson Button

"So today it doesn't rain.  Great, just great.  And who put the gravel in my gearbox?" - Lewis Hamilton

"Remember when I was good?" - Slappy Schumacher

"I will be not unlike a god tonight.  Geishas and pachinko await!" - Gandalf Kobayashi

"What a difference one place can make." - Grizzly Nick Heidfeld

"Kobayashi was much faster than me, but that is not a reason to let him past, so I fought as hard as I could and we touched and I had to pit for a new nose. I hope my team principal is happy that I was very determined." - NKOTT (note: real quote.  Translation: "Please let me keep my job.")

"I have to admit: I was hoping for two more cars to break.  So close to the points..." - Heikki Kovaleinninninnie

"I just wanted one specific one to break." - Jarno Trulli

"Do you have any idea how hard it is to drive when your teammate has crashed out for reasons nobody knows?  Doesn't make for much in the way of confidence." - Timo Glockenspiel

"This is my best race result all season.  I can see the end of my F1 career staring me right in the face." - Bruno Senna

"This is my best race result all season... at home, no less.  Pocky and anime await." - DJ DNF

"It was Schumacher that did it, wasn't it?  I don't know how, but he loosened my wheel." - Nico Rosberg

So that's it from Japan!  With any luck, we'll be back with the race in Korea in two weeks!  Keep reading The Pond for the latest news and notes for that and we'll see you soon!

1 Yikes!  Seems like there must have been a gremlin in the pits loosening wheels.

3 Darth Bernie was quoted this weekend as being "sure" that Korea will happen on time. I got a laugh at seeing this headline, as it was one link below the article on the scheduled inspection that hasn't happened yet. My guess is that the surface won't really be ready, but that the race will go ahead anyways. Anyone taking bets on Austin yet? The last thing I heard was that they need to break ground this December to have any chance, but that at the meeting a few weeks ago to get county approvals and such the board literally laughed at the contractor's presentation on things like drainage, traffic control, etc. Not a good sign.

4 Reportedly Kubica said "What Kamui did with his car was super. Because I had to watch on television, he saved my day."