*THE RACE:  Approximately 40 minutes before the start of the race, the heavens opened up and most of the contents of Lake Balaton found itself deposited upon the Hungaroring.  Charlie Whiting hung out the "changing conditions" sign, leading the teams to scramble to make any weather-related adjustments that they cared to apply to their cars.  Unfortunately for everybody, the track ranged from soaked to merely damp to "rain, what rain?"  This is the worst sort of situation for Intermediate tires, which desperately need water on them to keep them from dying.  The race began with everybody tiptoeing their way around the track.  Lewis Hamilton, starting from the pitlane, spun in Turn 2, doing a touch of damage to his front wing, but it looked like everybody was managing the conditions.  Until Lap 8.

*SAFETY CAR:  That's when the entire race went into a cocked hat.  The Caterham of Marcus Erickson went into the tire barriers outside of Turn 4, impacting hard enough to trip the Impact Detector in the cockpit. 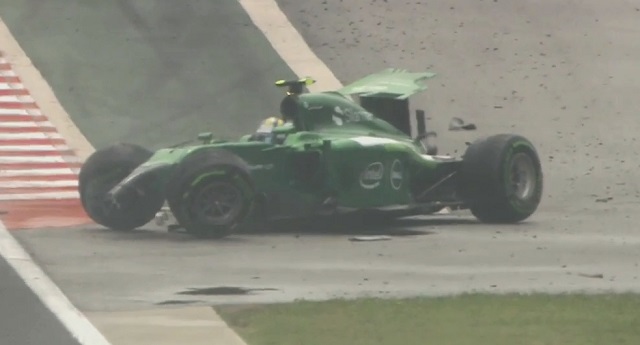 He walked away before the Medical Car arrived on scene, but there were some butterflies in the stomachs of the assembled F1U! crew when the first marshal on scene gave the signal for "possible injury".  A few laps later, still under the Safety Car, the Lotus of Lettuce Grosjean ended up hitting the wall on the inside of Turn 4, extending the SC period for another couple of laps.

*FALLOUT:  War.  War never changes.  Just before the Safety Car was called out, Mercedes' Nico Rosberg led the Williams of Valterri Bottas, HWMNBN's Ferrari, and the McLaren of Jenson Button.  When Berndt Maylander exited the pit lane, it was after those four had gone past the entry to pit lane.  Suddenly, the people behind the leaders were leading!  Daniel Ricciardo got the big boost, jumping from fifth to the lead.

*STRATEGERY:  Under the Safety Car, McLaren consulted their weather radar closely and came to the conclusion that there was going to be more rain soon.  While the rest of the field stopped and switched to slick tires, both Jenson Button and Kevin Magnussen were kept on Intermediates.  The rain did not come, and both cars rapidly burned their tires down to the ground.  After that, neither were in contention for anything important.

*AND ALL THE REST:  One problem with wet weather races is that they require exquisite attention if one is to recap them adequately, and that level of focus is currently beyond the abilities of the F1U! crew.  There was another Safety Car on Lap 23, when Sergio Perez crashed on the front straight, and that turned the resumed race back into a dog's breakfast.  We'll skip to Lap 60, which saw HWMNBN leading Lewis Hamilton by just over a second, who was being pursued by Daniel Ricciardo by about a second.  While it looked for a few laps like the Ferrari driver could maybe... maybe... keep the other two behind, his tires were too old to legitimately hold the lead.  Surprisingly, it wasn't Hamilton, gunning to become the first driver to win from the pit lane, but Ricciardo who took the lead after disposing of the Merc.  Hamilton's fading tires also prevented him from getting past HWMNBN and left him open to a charging Rosberg to boot.  While the two teammates squabbled, the Red Car came home in 2nd place.  It should rain more often at the Hungaroring.

*OH, BY THE WAY:  Force India's Nico Hulkenberg ran into the back of his teammate and wound up stuck off the final turn on Lap 16, engine stalled.  This brought to an end his points finish string that actually started last year at the Grand Prix of the Americas.  This leaves only one driver to have earned points at every race this season: HWMNBN.

*DRIVER OF THE RACE:  Lewis Hamilton.  Start from the pit lane, see how well you do in a race.  Think you can get a podium out of it?

*TEAM OF THE RACE:  Ferrari.  We're not fans of the red cars from Maranello, but dear lord did they need that result.

*MOMENT OF THE RACE:  In the mid-late portion of the race, Nico Rosberg was charging up on Lewis Hamilton, clearly somewhat faster for whatever reason.  The Mercedes pit wall called Hamilton and told him to move over and let his teammate past.  Hamilton responded with "aw hell naw."  To be fair, he said if Rosberg could get close enough, he'd move over.  Rosberg couldn't do it.  This may have cost Mercedes the race, but he had a point.

There will be no quotes of the race this time around, as we're now in the F1 Summer Break, and none of the drivers stuck around to be interviewed.  The next race is at Spa-Francopants on August 24th.  We'll see you then!!!

1 Nothing like crazy weather for a crazy race, I guess....