F1 Update!: Hungary 2011 In the 25 year history of the Hungarian Grand Prix, there had only been one wet race, 2006.  That year, Jenson Button, then driving for BAR Honda, started very far back on the grid and through fine use of his wet-weather tires earned his first Grand Prix victory.  Today, despite weather forecasts calling for sunny skies, rain was falling in Budapest as Jenson Button, now driving for McLaren, took to the grid for his 200th Grand Prix start.  Would history repeat itself?  THIS is your F1 Update! for the 2011 Grand Prix of Hungary!

*FALLING SKIES:  Indeed, rain was falling lightly as the cars took to the track for their reconnaissance lap to the grid.  When the cars rolled off on the parade lap, everybody was on the Intermediate tires... but the rain had stopped, and nobody could say what the weather was going to do next.  By the time the parade lap was complete and the drivers were awaiting the extinguishing of the lights, there was already the faintest hint of a dry line on the circuit.  For both the men in the cockpits and the men on the pit wall, this was the worst of all possible scenarios.

*AND WE'RE OFF: Red Bull's Seb Vettel led the the two McLarens into the first turn, and us jaded watchers in the F1U! war room pretty much expected him to run away and hide.  After all, he's been one of the better wet-weather drivers on the grid in recent years.  Meanwhile to nobody's surprise, Vettel's teammate Mark Webber had another of his patented Lousy Starts©, dropping to approximately 94th position... or 8th, if you want to be picky about it.

*BUT...:  Not only didn't Vettel gap the field, it very quickly became clear that he was actually holding up the McLaren of Lewis Hamilton!  For the first four laps, it looked like the Glare On Wheels was attached to the Red Bull by a tow bar, so firmly was Hamilton stuck to the rear of Vettel.  On Lap 4 Hamilton nearly pulled off a pass going down into Turn 2, but had to back down.  In the same place on Lap 5, he tried again... and Vettel lost grip on the wet pavement and staggered wide, letting the 2008 World Champion by with nary a shout.  In fact, he nearly let the McLaren of Jenson Button, shadowing the two in third place, get by while recovering.  By the start of the sixth lap, Hamilton had a 2.5 second lead, and showed no sign of slowing up.

*HOW DRY I AM: On lap 11, with very little to lose Mark Webber became the first driver to risk shedding his galoshes and tried on the super-soft tires.  A lap later, so did Button from third, and then everybody else came in the next lap.  The order remained Hamilton, Vettel and Button... until Button blew the metaphorical doors off the reigning World Champion to take 2nd place.  Meanwhile, in all the scramble and hubbub in the pits, Webber ripped off some blistering laps and wound up in fourth.  Gamble won for the Aussie.

*RENAULT FLAMBE:  The day had not been going well for Grizzly Nick Heidfeld.  Nowhere near the top 10, with no visible hope of improving much, he ducked into the pits for another set of tires.  A recalcitrant wheelnut kept him in the box for a long stop... just long enough for the Renault's forward-facing exhaust to begin burning sidepod carbon fiber.  As he was released from the stop, smoke and some sparks were visible, and by the time he reached the end of the pitlane, it was clear something was very very wrong.  When he pulled over onto the grass, things got even worse. 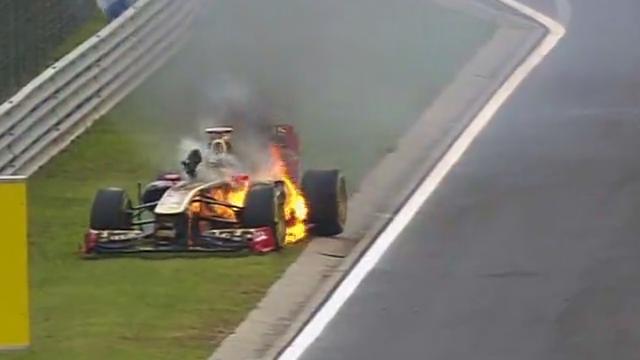 Heidfeld quickly scrambled out of the car and headed for the hills, unharmed but lightly toasted.  As he ran towards the armco, track marshals ran towards the now merrily burning Renault with fire extinguishers.  Soon, most of the fire was out, and it became a case of preventing it from restarting.  A marshal went around to the left-hand side of the car and hosed down the most obviously burned part of the sidepod... 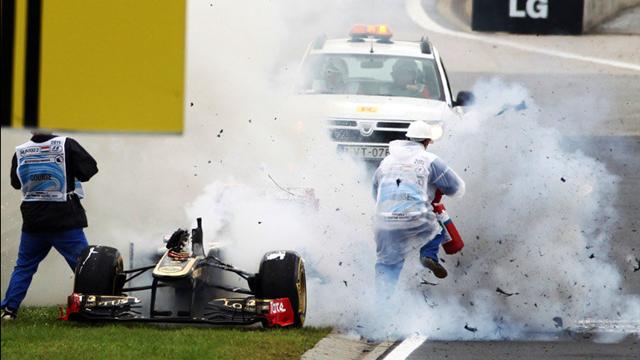 Reports are that the extinguisher spray hit a superheated aluminum bottle of nitrogen, used to pneumatically actuate the cams in the engine, that through last season was kept inside the monocoque.  This year, Renault moved the bottle to the outside of the cockpit, inside the sidepod.  The sudden blast of cold fluid, combined with the heat expansion of the nitrogen inside the aluminum bottle, caused the bottle to fail explosively.  While debris was scattered some 20 feet onto the track and the marshal suffered some minor leg injuries from carbon fiber shrapnel, all was basically okay.  Dramatic, though. (UPDATE: Video can be found here)

*MORE DRAMA:  On Lap 45, Hamilton still led Button by some 6.5 seconds, followed by Vettel, HWMNBN and Webber.  Nobody else is within 50 seconds of the leader... but there is trouble in the air.  Specifically, a light rain shower had begun to fall on the back half of the track.  Hamilton looped his car in the sudden slickness, letting his teammate by for the lead, but gets back on the pace before Vettel can catch him.  On Lap 50, Button returns the favor by sliding wide in a puddle and Hamilton regained the lead.  At this moment, the race seemed poised on a knife's edge.  If the rain continued, you'd have to go onto Intermediate tires just to stay on the track... but if it didn't, the slicks would remain the way to go.  On Lap 52, Webber again made the call first and went for the Inters.

*SNAKE-EYES: On Lap 53, the McLaren pitwall got on the radio to their drivers: pit for Intermediate tires.  Hamilton dove in, but Jenson Button stayed out on the slicks to retake the lead.  Suddenly every eye in Budapest was affixed to the skies... would it or wouldn't it continue to rain?  In two laps, as HWMNBN made easy work of the galoshes-shod McLaren, it became obvious that Button, not Hamilton, had made the right call.  Hamilton went back into the pits for dry tires, then was told he'd have to make a drive-through penalty for his actions during his spin recovery on Lap 45.  He would rejoin the race in 6th, never again to be a threat.

*THE END:  Button eased off on the final lap, allowing Vettel to close to within 3.5 seconds as they crossed the finish line, but it wasn't really that close.  Ferrari's HWMNBN crossed the line 20 seconds later in third.  Hamilton, taking advantage of Webber's Red Bull in traffic, managed to finish fourth, nearly 50 seconds adrift, with Webber a second behind him.  Some 30 seconds after that came Felipe Massa's Ferrari, some two years after he was nearly killed at this track.

*OH, ONE MORE THING:  The Hungarian Grand Prix saw the title hopes of 17 drivers dashed.  The only people mathematically in contention now are the drivers of the Red Bulls, McLarens, Ferraris and Nico Rosberg.

*DRIVER OF THE RACE: The Hungaroring horks up a good race only when it rains.  The first time it happened was 2006; Jenson Button won that one too.  A superb drive from the 2009 World Champion, who made the right call to stay out despite ominous skies... a call that won him the race.

*TEAM OF THE RACE:  McLaren.  Red Bull still has the lead in both the Drivers and Constructors championships, but the gap is closing.  At least for the moment, it looks like McLaren has caught the leaders on the track, and their drivers are showing that they, not the Red Bull men, are the class of the field.  Might make for an interesting second half, that.

*MOVE OF THE RACE:  While serving Lap 64, Lewis Hamilton was hotly pursuing Mark Webber for fourth when they came upon Gandalf Kobayashi, who was trying to make a set of tires go some 30 laps... and failing miserably.  He'd lost five places in two laps as the two heavy hitters came up behind him. 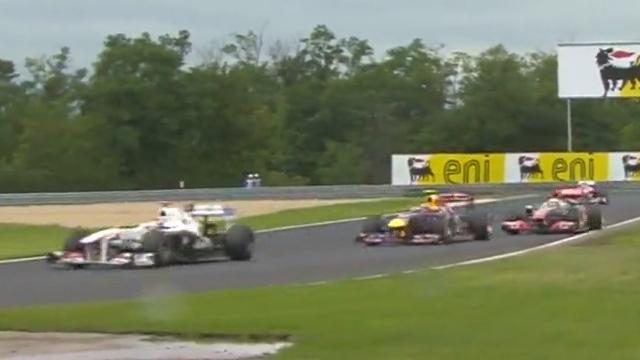 Knowing that Gandalf was there, Hamilton dove to the inside of Webber.  Just for an instant, the Red Bull driver was pinned in place, unable to get out from behind the Sauber. 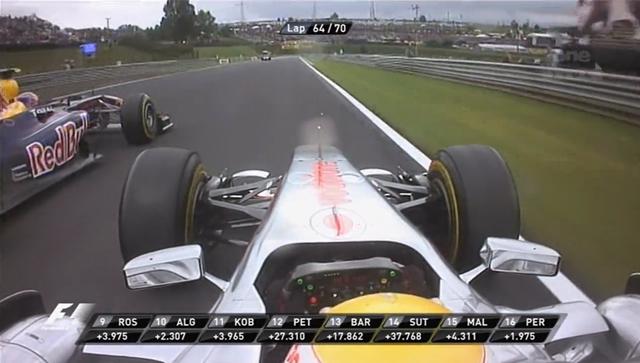 Quick as a flash, Hamilton zipped by Webber for fourth place.

For taking advantage of of the prevailing terrain (the Sauber Rolling Chicane?), we hereby bestow the MotR upon Lewis Hamilton.
*MOOOOOOOO-OOOOVE OF THE RACE:  Yes, we know it was damp and slippery out there.  Yes, we understand that the racing surface is different than the surface in the pit lane.  Yes, we are also aware that the paint on the pitlane gets even more slippery when it's wet.  But c'mon, Custard d'Ambrosio, it's not like you're driving on an olive oil-covered ice rink. 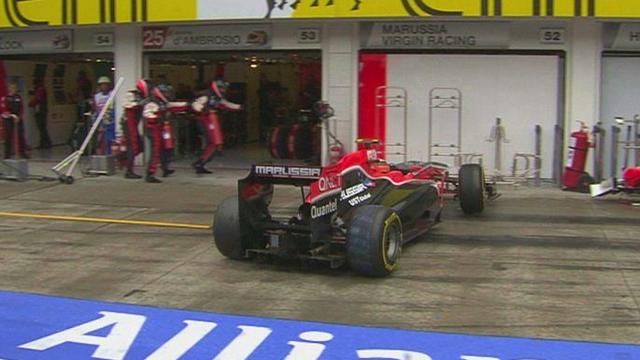 Spinning in the pit lane and sending your crew scrambling for cover?  Yes, you'd best believe that's a Mooooooooo-oooo.  Way to go!

No driver quotes, as this F1U! is late enough as it is.  F1 now enters its summer vacation period, so our next race isn't until the end of August!  Oh, but it's a special one... because we'll be in Spa-Francopants!  See you then and there!

Lots of drama in this race.  That exploding water bottle was scary stuff.