F1 Update!: Great Britain 2014 Clouds in the sky warned that we might get weather at Silverstone today, which would just make the race completely bugnutty.  Would that be enough, however, to stop the charge of Mercedes' Nico Rosberg from pole?  Or would 4Time Vettel have enough in pocket to slap the Silver Arrow off path?  THIS is your F1 Update! for the 2014 Grand Prix of Great Britain!

*LIGHTS OUT!  WHOOPS...:  Right off the bat, we knew it wasn't going to be much of a day for 4Time Vettel, as his Red Bull had a truly awful start, falling from second to fifth in the blink of an eye.  Ominously for everybody, the Mercedes of Lewis Hamilton jumped from sixth to fourth almost immediately, opening up the prospect of Hamilton chasing Rosberg for the lead... just like just about every other race this season.  But then Kimi Raikkonnen played his hand.  Starting 20th, he knew he had to make up as many places as possible as early as possible if he was going to earn any points for this race.  Unfortunately, he ran wide at Turn 5, a place with a huge expanse of asphalt runoff for safety.  Knowing this, the Finn just kept his foot down as he returned to the circuit.  Good for him, except for one problem: he misjudged where he was coming back and wound up bumping over a dirt track, sending the rear of his car into the air and, apparently, breaking his suspension at the same time.  When all four tires hit the tarmac, it immediately speared off to the right, slamming head-on into a metal barrier and rebounding back across the track.  At this point, Felipe Massa  came upon the accident.  Screened by the car ahead of him, he only saw the ruined Ferrari at the last moment.  He still had the presence of mind to throw his car into a skid so he hit Raikkonnen a glancing blow instead of running headlong into the ruined Ferrari.  Off to one side, Marussia's Max Chilton had a frighteningly close call as one of the Ferrari's wheels caromed off his car about a foot or so from the cockpit and the driver's head.  Raikkonnen got out of the car, visibly limping from what turned out to be an severe ankle bruise.  His impact with the barrier was measured at 47Gs, and the barrier needed to be replaced as a result.  This brought out the Red Flag, bringing the race to a halt for an hour.

*AND AGAIN: Once the race restarted, it was business as usual for the Mercedes boys.  Rosberg pulled away from the McLaren of Jenson Button in 2nd, while Hamilton blew past Button's teammate Kevin Magnusson for third.  It took only a couple more laps for Hamilton to dispose of Button and set off in pursuit of his teammate.  In the process of dealing with each other, the two Merc drivers managed to open up enough of a lead that they both pitted and resumed without losing any positions.  As the two were on different tire strategies, it looked like we were in for an exciting finish between two evenly balanced drivers.  Until...

*BOOM GOES THE GEARBOX:  Lap 28 or so, when Hamilton swept by a slowing Rosberg, who had lost the ability to shift out of sixth gear.  Rosberg ended up parking behind a barrier, out of the race.  Nobody came close to catching Hamilton, who finished a full 30 seconds ahead of the second place car of Valtteri Bottas.

*NOT ALL BAD: Which didn't mean that the rest of the race was dull.  Ferrari's HWMNBN and Red Bull's 4Time Vettel got into a multi-lap scrap with both drivers pulling off incredible passes at the most unexpected times, fighting wheel-to-wheel for a dozen rounds of the circuit... and each complaining about the other's driving style repeatedly.  In fact, it got so silly the two gave the term "playground argument" a bad name.  Still, it was definitely the highpoint of an otherwise not so great second half.  All of it over 5th place, which Vettel eventually took.

*DRIVER OF THE RACE:  Valtteri Bottas started 14th, a position unlikely to turn into much of a result.  Instead, the surging Williams driver scored his second podium in a row, and the second step to boot.  Next race?

*TEAM OF THE RACE: Red Bull.  4Time finished 5th, Mr Smiley Ricciardo was on the podium, which makes it look like the team might just have turned a corner maybe.  Or maybe not.  Either way, it looked good for them. 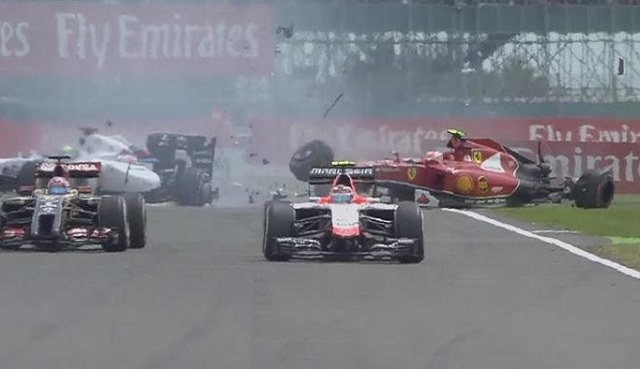 "Sorry, Dad, I couldn't swing it for you." - Jenson Button

Next race is in Germany, and already the Brit Hamilton is throwing barbs at his German teammate Rosberg: "He's not a real German, he is German-Finnish-Monaco-esque-whatever."

1 And Hulk ended in the points again! All hail Force India!

2 Speaking of "any nigh-instantaneous deceleration you can walk (limp) away from..." Ouch.

3 Bottas also moved past Vettel for 5th in the drivers standings.  He certainly deserves the Driver of the Race award.  However, I think Alonso merits at least a little consideration for Driver of the Race, considering he pulled a worse car up from 16th to 6th...while having to take a 5 second stop/go for being horrible at parking.