F1 Update!: Grand Prix of Malaysia 2010! It always rains in the afternoon in Malaysia in April.  Always.  THIS is your F1 Update! for the 2010 Grand Prix of Malaysia!
*EXCEPT TODAY:  One would think the weather gods did it just to spite us, but other than an ominously dark sky seemingly just outside the gates to the Sepang International Circuit, the track was as dry as the Mojave Desert... and seemingly just as hot, though much more humid.  They say in conditions like this a driver can lose up to 15 pounds, and it's murder on the cars as well.  That's probably why Pete Rose's Sauber died on the recon lap, and why five other cars had mechanical failures to boot.

*DRY TRACK: ...but not a dry race.  With Lewis Hamilton, Felipe Massa and HWMNBN starting from the nether regions of the grid, you would expect a lot of excitement as they weaved their way past the backmarkers, and you'd be absolutely right.  Hamilton was up to 10th by the end of the fourth lap, with the two Ferraris not far behind.  What happened at that point was that we wound up getting a lot of coverage of the mid-pack cars that we don't normally see.  Jaime Alguersuari aka NKOTT in particular has come alive after his 20-some-odd lap tussle with Slappy Schumacher in Australia, and spent a good portion of the race dicing with other big names.  That his Toro Rosso isn't fast enough to keep the likes of McLaren and Ferrari permanently behind shouldn't be a knock on the New Kid.

*UP FRONT:  The big question for this race (other than "where the hell is the rain?") was "will the Red Bulls hold together?"  It's clear that they're the class of the field, just a touch ahead of Ferrari.  With the red cars buried in the backfield, it was obvious that this was Vettel and Webber's race to win... which they did, in that order.  Vettel made a slightly better start from 3rd than Webber from pole, got past his teammate going into Turn 1, and then the two never looked back.  They cruised home with Vettel five seconds ahead of Webber, who in turn was nearly 11 seconds up on Nico Rosberg.

*DRIVER OF THE RACE:  There's very little question but that Ferrari's HWMNBN is probably the best driver in F1 right now, and his race today in Malaysia proved it.  On the formation lap before the race even began, he had a little problem with his clutch: it didn't work.  For the entire race, he had to downshift by stamping on the accelerator and holding the downshift paddle, and hoping that the gearbox would eventually find a lower ratio.  Mind you, he did all of this while braking at the same time, usually a sure recipe for disaster as F1 cars tend not to like such things while cornering.  That he managed to get as high as eighth, setting fast lap of the race twice along the way, and dueling with Jenson Button for seventh, is nothing short of miraculous.  It actually came as quite the surprise, then, when his engine finally let go on him with two laps remaining. 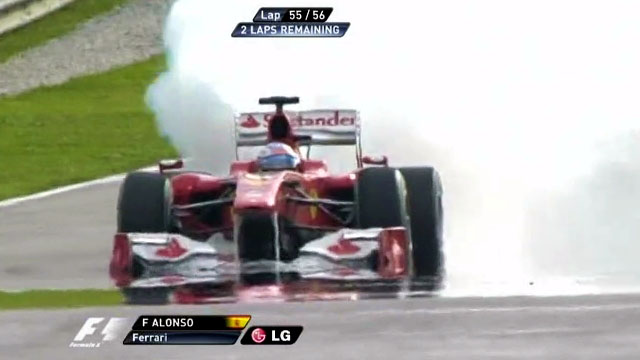 We'll admit it: we were actually saddened when the smoke began pouring out of HWMNBNs engine.  He ended up placed in 13th, out of the points... a fate he really didn't deserve today.

*TEAM OF THE RACE:  The sigh of relief emanating from Austria was strong enough to blow trees around here at Pond Central.  Everything was aligned so that Red Bull could score an easy 1-2 today, as long the cars didn't break or the drivers didn't screw up as they had in the previous two meets.  Today, finally, everything went right.  That Ferrari and McLaren had shot themselves in the foot was merely icing on the cake.

*MOVE OF THE RACE:  Early on, Jenson Button was sandwiched between the two Ferraris, Massa ahead, HWMNBN behind.  The McLaren was on the softer tires (a choice he'd later call "a mistake"), the two Ferraris on the harder, so Button would be faster if he could just get past Massa.  When Massa got a bit out of shape into Turn 10, Button thought he had his opening and made his move... just a moment too late.  While he got under Massa, he couldn't quite get more than halfway up the length of the red car.  In the process, he too got a little wide in the corner... opening the door for HWMNBN, who immediately leaped through with a flourish and a jaunty 'tah-dah!'  In the process, he managed to squeeze Button into a place where he couldn't fight back AND he couldn't threaten Massa anymore, without risking pronging his car.  He dropped back, HWMNBN slipped into line behind his teammate, and the two sauntered off, thumbing their noses at the World Champion as they did.  Rather spiffy driving from the two-time World Champion.

*MOOOOOOOO-OOOVE OF THE RACE:  While the new teams are permanently stuck in the backfield, many of the drivers in those cars are experienced and knowledgeable in the ways of auto racing.  All of which makes Timo Glockenspiel's spin on a straightaway for no reason whatsoever completely stunning. 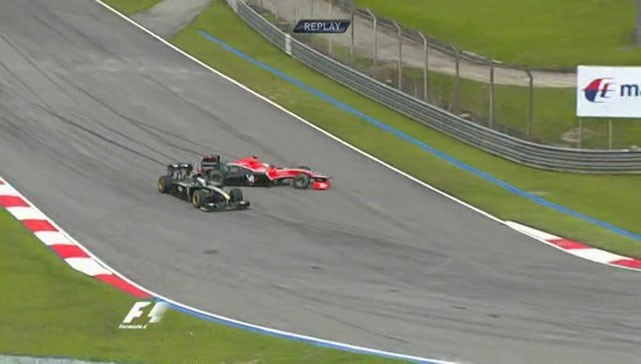 Seriously.  He didn't touch Jarno Trulli's Lotus before the spin, he wasn't even particularly close to the other car.  He just... lost it.  On a straightaway.  Incredible, simply incredible!  BRAVO, Timo... here's your Moooooooo-ooove.

"We had a chat to Christian (Horner) at the start of the race and he said ‘Boys, behave yourselves!’ and we did." - Mark Webber (on why he didn't fight Vettel even harder for the lead at the beginning)

"I'm happy to have brought Mercedes its first F1 podium in 50 years... which is almost as long as my teammate has been driving.  Where did he finish today?  And who's the lead driver?  This?  Oh, it's a wheel nut." - Nico Rosberg

"I stayed ahead of the Force India all day.  There was a time when saying that meant you finished 18th." - Robert Kubica

"...and to all the naysayers out there, let me say this: Force India is a legitimate contender for wins this year.  Believe it!" - Adrian F'n Sutil

"Now I'm a believer.  Not a trace of doubt in my mind." - Lewis Hamilton (who fought with F'n for most of the second half of the race for fifth, and just could not get by, no matter what he tried.)

"Me neither.  Did you know that these are my first points in F1 ever?" - NKOTT

"My front wing was damaged on the first lap when I made contact with Kobayashi. It meant that from then on, I lacked grip and had a lot of understeer.  I mean, more than I usually do." - Sebastian Buemi

"I don’t know what happened at the start, I’ll go through that with the team." - Rubens Barrichello, who stalled as the lights went out (note: we do, Rubens... you couldn't start a lawnmower, let alone a F1 car)

"Hey, you try driving without a clutch." - HWMNBN

"Don't ask me how I managed to finish the race.  We basically ran out of fuel with six laps to go.  I had the fuel mix set so lean that if I sneezed, the engine would quit from the added resistance." - Lucas di Grassi

"We finished the race!  Oh yeah, who's the man?  Chandhok's the man." - Karun Chandhok

"My last few laps I was nearly 30 seconds slower than everybody else due to a hydraulics problem.  You think the team would have called me in, but nope!  Our home race, after all." - Jarno Trulli

"They never got the chance to keep me out, Jarno." - Heikki Kovaleininninninnie, (whose Lotus died a hydraulic death ten laps before)

"I've got a gearbox full of Peeps!" - Vitaly Petrov (overheard on the radio when his car died)

"I dunno, man, it's like, I was drivin', man, and then the engine just stopped, man.  Bummer." - Vitantonio Liuzzi

"It was a shame that I could not finish the race but unfortunately the wheel nut on the left rear wheel was lost.  After I stopped and had a look, it was evident that was a wheel nut missing. It is something very unusual to happen." - Slappy Schumacher  (aww, what a pity.)

2 It was years since I saw someone classified with DNS (it was in the 107% years, I think).

3 I don't know that I've ever seen it, Pete, but I haven't been a diehard F1 watcher for very long as those things go.  Let's see what I can come up with...

The last DNS before that one, though, was Jenson Button at Monaco 2003.  It appears he was injured in the 2nd Saturday Practice and wasn't involved in the Quals... but was still listed as a DNS.  For people who actually DID qualify, it'd be Jos Verstappen at the 2003 Austrian GP.  His DNS is listed as "launch control", which makes me believe that we had the first incident of the Minardi Chicane then.

There is a lot that's awesome about this finish. Having Red Bull come 1-2 is awesome in its own right. Having Kubica finish in the high points is awesome. But having Force India come in 5th is the most awesome thing of all.

I wonder if Glock's spin-out was caused by tires? Did he have the wrong kind on?

5 Another point: after today's race I'm beginning to hope that this season will be a complex and interesting one. There are a lot of teams who have been putting in surprisingly good races (like Force India today) and I'm beginning to think this isn't going to be a 2-team or 3-team season like so many we've had. This year it's not just McLaren and Ferrari; it's also Red Bull, and Mercedes GP, and Renault and Force India can't be counted out. Kubica and Sutil are good enough drivers so that with half-way decent cars they can be a threat -- and that's what they've got: half-way decent cars.

6 Steven, I'm going to go so far as to say that Force India has a better than half-way decent car.  One of the big reasons that Hamilton couldn't get past Adrian F'n Sutil was because the cars were pretty evenly matched.  The McLarens were the fastest through the speed traps all weekend, but the Force Indias were next in line, not very far behind at all.  And that's with the McLaren trick of being able to stall their rear wing for extra MPH.  Take that off, and there's a good chance that the FIs would be the fastest car on the grid, by far.

The FI, in the hands of Sutil at least, is also better through the turns; it was running a notably less amount of rear wing than the MP4-25, meaning less downforce... but it could turn with the McLaren with ease.  Of course, both cars are running the same engine.  The main difference between them is money; McLaren can outspend FI, and will, thereby being able to improve their chassis faster.

But at the moment?  Almost equal.  It comes down to driver skill, which explains why Sutil can hang with Hamilton and Button, and Liuzzi can't, despite having the same car.

7 And regarding Glockenspiel's spin, it was lap 4.  Unless he had full wets on (he didn't), his tires should have been okay, no matter the compound.  Hell, even Intermediates would have held together for four flying laps, though not much longer than that.  Nope, Timo just peed it down the leg of his firesuit.

8 I was really enjoying watching Petrov battle it out until his retirement. I think we've found the solution to the "more passing" problem... make all the fastest qualifiers start at the back!

I was disappointed to see HWMNBN go kerblammo with less than two laps to go.  :-(  On the other hand, it's always a pleasure to see Vettel win.