F1 Update!: Grand Prix of Bahrain 2010! All the effort in the offseason is done.  The long hours spent designing, fabricating, assembly, testing, retesting, redesigning, and re-retesting are over.  Now it's all for real, and which team, which driver, which car is the best... all the questions are about to begin to be answered.  THIS is your F1 Update! for the first race of the 2010 season, the Grand Prix of Bahrain!

*THINGS LOOK THE SAME:  When the lights went out and the grid began to move, Red Bull's Sebastien Vettel pulled away from his spot on pole and immediately began to assert his dominance over the rest of the thundering herd.  While HWMNBN got past his Ferrari teammate Felipe Massa going into Turn 1, neither Red Car was able to hang with the Red Bull driver.  Within a couple of laps the lead was up to two seconds and showed no sign of decreasing anytime soon.  Ominously however, Vettel's teammate Mark Webber showed signs of a mechanical problem going into Turn 2: 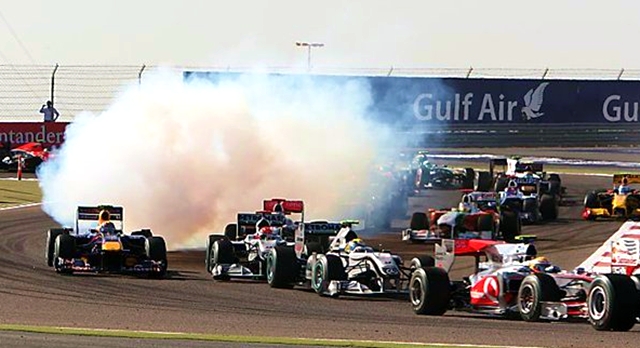 Webber (left) pretends to be a WWII destroyer.
Webber's smokescreen caused a kerfluffle that sent both Robert Kubica and Adrian Sutil into spins that ruined each drivers' race.  Sutil in particular was in good shape when the lights went out: his was the only car in the Top 10 on hard tires, and if things went the way they had in Practice and Quals, everybody else would find their soft tires failing quickly, leaving Sutil the way clear for a potential podium position.  The spin dropped him down to 18th and killed his tires.  Webber, however, showed no signs of performance loss from whatever it was that caused the smoke.

*FARTHER BACK: Almost as interesting a question as "who's going to win" was "how are the new teams going to do?"  Well, if you had Lap 1 in the "When will one of the new cars fail" pool, you're a winner.  HRT's Karun Chandhok, with only a few laps in the car under his belt, discovered that the new section of the Bahrain International Circuit has some serious bumps hiding in the turns.  Hitting one of those sent him onto a curb, and henceforth into a wall.  The good news for the team was that it wasn't a mechanical failure that ended his day.  The next casualty from the new guys was Virgin's Lucas di Grassi who had to retire with a hydraulics problem on Lap 2.  His teammate, Timo Glockenspiel, followed him into the garage 14 laps later with a bad gearbox.  The other HRT driver, Bruno Senna, lasted 17 laps before something peacefully broke at the rear of the car.  If one considers the Sauber team as "new," you can count them amongst the New Casualties as well, with both cars dying from hydraulic failures by Lap 28.  The last of the new teams, Lotus, had both cars make it to the finish one of their cars finish the race, though two laps down.  The other one broke something in the hydraulic system on Lap 46... so close!

*...AND THEN:  Seb Vettel's lead settled down around five seconds going into the pitstops.  Ferrari had told HWMNBN to push as hard as he possibly could however, and the lead started to drop.  By Lap 32, it was down to 1.2 seconds.  A radio transmission from Red Bull to their driver told the true story, though: "Just keep the gap intact.  He'll burn his tires off."  Everybody seemed confident, and Vettel had surely shown that he could easily keep HWMNBN behind him.  And then Vettel's car broke.  The engine note changed, dropping from a high-pitched scream to a throaty growl, and immediately both Ferraris swept past him with the McLaren of Lewis Hamilton doing the same a couple of laps later.  For the next ten laps, the question was how many other cars would get past him.  While Nico Rosberg, Slappy Schumacher and Jenson Button closed right down on Vettel, with Rosberg being only a second behind, none of them were able to get past the crippled car.  Up ahead, HWMNBN and Massa brought home a Ferrari 1-2 with Hamilton joining them on the podium.

*DRIVER OF THE RACE: HWMNBN.  He got past his teammate at the start, drove a solid race, put pressure on Vettel and stayed close enough to the Red Bull to take advantage of its exhaust header failure spark plug failure when it occurred.  He eventually won by 16 seconds.  Yep, that's a pretty good run.

*TEAM OF THE RACE: Ferrari.  In 2009, the Prancing Horse suffered one of their worst seasons ever.  They only had one win (Spa), one of their drivers nearly died, and they had the nightmare of Luca Badoer qualifying and finishing dead last three races in a row.  So a 1-2 finish must be something of a redemption for them, and there is already muttering up and down the paddock that we'll be seeing a lot more of this in the coming months.

*MOVE OF THE RACE:  We'll think of one eventually, but right now it looks like the changed rules might have actually made it more difficult to pass.  If so, this is not good.

*MOOOOOOO-OOOVE OF THE RACE:  Nico Hulkenberg was having fun early in the race.  Other than having to take evasive action due to the usual first turn hijinks and thus losing a few spots, he was racing with a Toro Rosso and a Sauber for position.  On Lap 3, however, he just flat-out lost the car.  The rear snapped one way, then the other, and then the car just went sliding completely out of control, cutting across two sets of curbs. 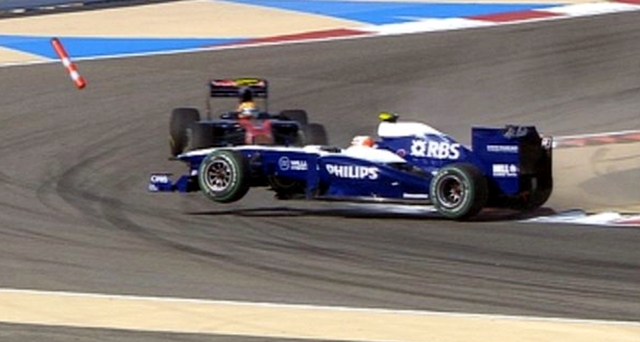 It's just a good thing the Toro Rosso guys wear brown pants.  Welcome to F1, Nico Hulkenberg!  For your unforced error, you're the first 2010 winner of the Moooo-ooOTR!


"I love Ferrari, and I intend to finish my career here... until Massa beats me, then I'll sulk, pout, and bitch.  Again." - HWMNBN

"I had a slight vibration towards the end of the race, which was welcomed because it's the first action I've had since Nicole broke up with me." - Lewis Hamilton

"After three years away, I'm happy to say that I had fun out there today.  It was a little dull, though." - Slappy Schumacher

"I spent too much time taking care of my tires and not enough time racing." - Jenson Button

"Hell, we sure didn't have to worry about mosquitos after you were done, Webbo." - Vitantonio Liuzzi

"He's back one race and Slappy's already beating me?  AGAIN?  You know the only reason he came back was to take my career starts record away from me..." - Rubens Barrichello

"I was beaten by a Lotus?  Now that's just sad." - Sebastien Buemi

And so the first race is in the books, and the whole circus now packs up and heads to Australia.  See you in two weeks!

1 It's like a flashback to the bad old days when it was Ferrari and McLaren and a lot  of no-hopers. I sure hope it doesn't stay like this for the whole season; it'll put us all to sleep.

2 By the way, any indication of what happened to Webber's car to make all that smoke? It's hard to believe something like that could happen without affecting performance.

3 Steven, would you believe it was just an oil spill?  Red Bull just put a little too much oil into the engine, and when it started to feel the Gs of a race, it just slopped around a bit.

Looked dramatic, but it really wasn't anything more than that... just like a tank injecting diesel into its exhaust to make smoke.

4 I believe Webber was unveiling the first use of weapons a la Mario Kart into F1. I know people who know people in the business near me, and I had heard rumours of Force India working on something they called "Project Red Shell", but it wasn't clear before what that was.

Could they have possibly referred to Schumey's advanced age  and crows' feet any more than they did?????  Geez, it's not like 41 is even old.  Some of us took offense...harumph!!!!

If Vettel hadn't had car trouble, it would  have been his race yesterday, so HWMNBN shouldn't be so self-assured.  I was also thinking that same thing about his reaction when Massa beats him.  At lease he didn't do one of his goofy animal poses yesterday.

6 A tedious race.  I realize that refueling isn't a traditional thing for f1 - a UK native friend called it an American aberration this morning - but maybe it would help.  The rules changes were supposed to increase opportunities for overtaking.  Maybe things will heat up over the next few races.

And fickle Geese has changed her allegiances to Jensen Button.  I guess one retirement is all he was allowed.