F1 Update!: Canada 2016 Above the beautiful man-made island in the St Lawrence River called Ile Notre-Dame in Montreal, the skies were gray and random, spitting rain here, there, nowhere, then everywhere.  Even as the F1 Circus performers lined up on the grid, nobody was quite sure how long slick tires would be on the cars.  Make no mistake, the track was dry... now, at least... but a glance at the radar screen made it clear that rain sometime during the race was a 50/50 and pick 'em bet.  Lewis Hamilton's Mercedes sat on pole, but his teammate and current championship points leader Nico Rosberg was right next to him... and the revived Ferrari of Seb Vettel was directly behind.  Would the rains be the deciding factor?  Or would speed and control carry the day?  And if so, from whom?  THIS is your F1Update! for the 2016 Grand Prix of Canada!

*LIGHTS OUT:  It is not uncommon for cars of great overall ability to have a small weakness here or there.  Like a slightly misshapen nose on a supermodel, that flaw tends to emphasize, rather than detract from, the beauty.  So it is with the Mercedes F1 W07, the 2016 entry for that team.  It has the unerring ability to screw up any start, under any conditions, from any position on the grid, at any time.  And so it was that when the five red illuminated beacons were extinguished from the starters tower, both Hamilton and Rosberg seemed to have been sitting in wet concrete.  As Vettel roared past Hamilton's left to take a multiple car-length lead before the first turn, both Mercs staggered drunkenly off the line.  When the two of them bumped wheel rims in Turn 1, Rosberg had to leave the track; upon his return, he was quickly swallowed by the field and deposited in 10th place.  Hamilton was in slightly better shape, staying in second, but Vettel was proving to be in no mood to be trifled with.  Only a blown chicane kept him from opening a three or four second lead in just a couple of laps.  It was obvious that Ferrari wanted this win, and badly.

*STRATEGERY:  When Jenson Button's McLaren blew its Honda engine on Lap 10, bringing out a Virtual Safety Car, Vettel stopped to get off the ultrasoft tires and onto the supersofts.  This immediately made clear Ferrari's plan for a two-stop strategy for the race, as tire manufacturer Pirelli had gone on record that they expected one-stop strategies galore today... start on the ultra or supersofts, then switch to the hardest compound (ironically, the Softs) and go the rest of the way on those.  A two-stop strategy was aggressive to say the least, leaning hard on the ability of the driver to make up the lost time while having new rubber.  The question became, what would Mercedes do?

*ANSWER:  Nothing.  Nothing at all.  While Vettel quickly climbed back up to second from the fourth place he dropped to during his pitstop, it still meant that he had relinquished the lead to Hamilton.  On Lap 24, Vettel turned in what was then the fast lap of the race, cutting the gap to the Merc driver to five seconds.  It was clear that the leader would have to pit, and soon... but what would he come out on?  Would the German team go with the Soft tires and try to go the rest of the way?  Or would they mirror Ferrari and come out on one of the softer compounds?

*SURPRISE:  Pitting on Lap 25, Hamilton rejoined the race wearing soft tires... meaning he would have to go 45 laps on them to make the strategy work.  While Vettel had a 13 second lead, that wouldn't be enough to stay in front when he made his second stop.  Either he'd have to open that gap dramatically, or he'd have to make up the time during his final stint.

*PUSH, SON, PUSH:  Vettel pitted on Lap 37 for soft tires, rejoining in second place some eight seconds behind Hamilton.  However, the Merc was on tires 12 laps older.  Could Vettel make up the time with that advantage in pocket?  He began to whittle away at the lead, getting it down to under four seconds on Lap 50.  An interesting finish looked to be in store.

*THE END:  There's always one drawback to a strategy like the one Ferrari tried, and that's tire wear.  When you're pushing hard to go fast, you use up your tires more quickly.  It's just a fact of life in motorsports: the faster you go, the faster your tires go.  And today, in Montreal, was no exception.  Vettel began to make little mistakes... a small lockup here, a slightly blown turn there, and the gap to Hamilton began to open again.  Meanwhile, the leader marched around the circuit as if on rails, never putting a tire wrong, even turning in some fast laps on what had to have been well-worn rubber.  He would finish the race some five seconds ahead of Vettel, the two of them some forty seconds clear of the third place Williams of Valterri Bottas.

"Our first podium of the year.  Oh, and by the way?  Lewis and I were the only drivers in the Top 10 to use a one-stop strategy.  Take that for what it's worth." - Valterri Bottas

"That was mostly fun!" - Embryo Verstappen

Next race is next week!  We'll be in Baku, Azerbaijan for the return of the Grand Prix of Europe and the debut of what looks to be a very promising street circuit.  We'll see you then! 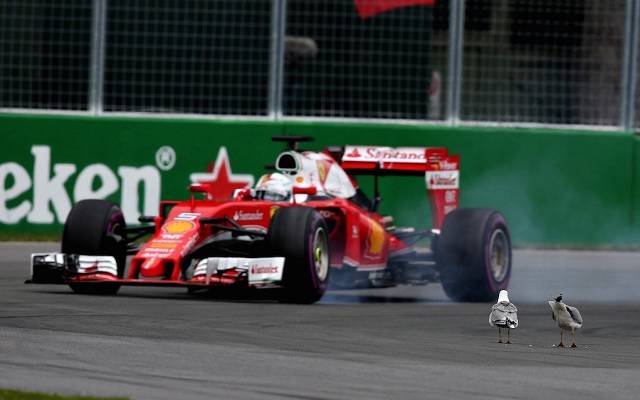 As usual, I "watched" this race by reading the liveblog on the F1 site. I was watching Dog Days in a separate window.

In Lap 57 they said, "Vettel goes straight through the final chicane - costing the German 1.5s in his battle with Hamilton.". I assume that means he blew the first turn of the chicane, went straight through it, and then cut across to pick up the track beyond the second turn.

And again, lap 62, "Big lock up for Vettel and he goes straight on at the final chicane. That mistake means Hamilton's lead extends out to 6.7s."

What I'm wondering about is the 1.5 seconds they say he loses each time. Is that penalty time added to his result at the end of the race? If so, and if he had managed to close to less than 3 seconds behind Hamilton, he might have crossed the finish line first and still not won. Is that how it is?

Has that ever happened?

Also, what the heck happened to Vettel to make him screw up so badly those two times?

2 The liveblog isn't really live... there's enough of a delay that they'd be able to see the time lost on-track by having to weave back onto the track when the cars come through the next timing-and-scoring point.

There ARE time penalties available to the stewards that can be added onto a driver's time.  Generally, however, they're applied late in a race for something that would normally earn a drive-through penalty or a stop-and-go penalty.

In Russia, Carlos Sainz was given a 10-second penalty for forcing Jolyon Palmer's Renault off-track.  This dropped him from an 11th place finish to 12th.

As far as what caused Vettel to blow the chicanes?  I mention it in the writeup: worn tires.  Really, nothing much more than that.

The two-stop strategy could have worked today.  That it didn't is less a knock on Ferrari for trying it than a pat on the head for Hamilton for making his one-stopper work.