F1 Update!: Brazil 2013 There were low grey skies hovering above Autodromo Jose Carlos Pace at Interlagos as the samba line known as the F1 Circus made its way to the starting grid, but the track surface was still dry.  It surely wouldn't stay that way, though.  THIS is your F1U! for the 2013 Grand Prix of Brazil!

*RACE:  Once the lights went out and the Thundering Herd charged down to Turn 1, we had the amazing sight of someone other than 4Time Vettel leading the race.  Both Vettel and his teammate, Mark Webber, had less-than-optimal starts.  This opened the door for both Nico Rosberg and Ferrari's HWMNBN to make runs at the Driver's Champion.  Rosberg got past, HWMNBN did not, but gave Vettel something of a scare through the Senna S complex.  It didn't last long, and neither did Rosberg's lead.  He did officially lead the first lap though, so that's nice for him.  Shortly thereafter, Vettel's RB9 blew past him on the straight and it became a normal 2013 race again.

*AND THEN:  On Lap 3, something distinctly abnormal occurred. 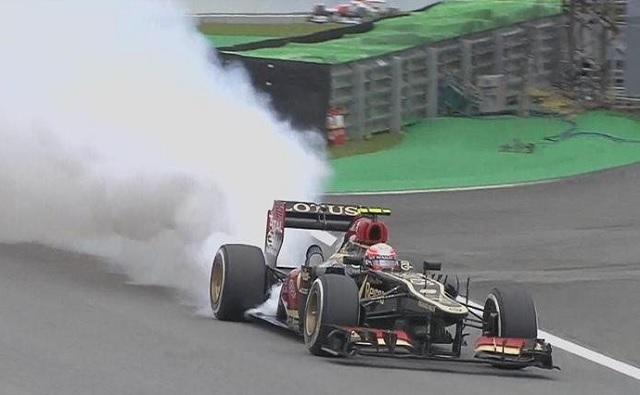 It's been long enough since the last comprehensive engine kablammo that we here at F1U! can't remember when it was.  In this case, the Renault RS27 of Lettuce Grosjean's Lotus let go, killing every mosquito in São Paolo.  Fortunately, he did not lay down an oil slick, nor did the immense amount of smoke released block vision for very long.  We here at F1U! remember when we'd see this scene every couple of races...

*OTHER THAN THAT?: The rain didn't come.  Everybody was looking to the heavens, trying to figure out when they'd open up.  Every driver was told to protect his tires as much as possible, so to keep that first pitstop at bay until it rained.  The thinking, quite logically, was that those who couldn't keep the tires alive would be at a disadvantage if they stopped before the rains came, as they'd have to stop again for rain tires.  But the rains didn't come, and the looks of confusion up and down the pit lane were plain to see.  "Wait, it was supposed to rain... now what do we do?"  It got so bad that when the second round of stops occurred, it still hadn't rained and Red Bull completely peed theirs down their legs.  Vettel came in, the team took his tires off... but they didn't have new tires for him, they had Webber's out and waiting.  In the time it took them to run into the garage and grab them, Webber came in and was forced to "stack" behind his younger teammate.  Clearly the two were supposed to pit in the opposite order.  This cost Vettel about six-to-eight seconds of lead time, though it hardly mattered.

*FINALLY:  Drops of rain began to appear on the on-board cameras with around 10 laps to go, but still the skies refused to drop The Great Equalizer upon the circuit.  The Legendary Announce Team tried to play it up as if the track had become "greasy," but the lack of fishtailing and drifting proved them wrong.  We don't doubt that the traction was somewhat less than perfect, but it wasn't that bad either.  Then, a few laps later, the inevitable occurred: 4Time Vettel swept across the finish line.  He led his retiring teammate by 10 seconds, followed by HWMNBN another nine seconds back.

*LOOKING AROUND:  Vettel won every race since the Summer Break, nine in a row.  This is the first time any driver ever has won nine races in a row in a single season.  He won 13 out of 19 races on the season (tying him with Slappy Schumacher for the most in a season), and 10 out of the last 11.  He scored more points alone (397) than the next closest team (Mercedes, 360).  He scored 83.58% of the maximum points possible  Only Mercedes and Red Bull scored pole positions all season.

*OH, AND THIS:  The last two episodes of McLaren's Tooned:

So that's how they dealt with Hamilton!

1 Running down to the appropriate place to post this...

Coulthard and Hakkinen pull out some older McLaren championship cars and take them for a spin.