F1 UPDATE!: BRAZIL! Never in a thousand years would we have predicted what happened at Interlagos today.  Lets get right to it! 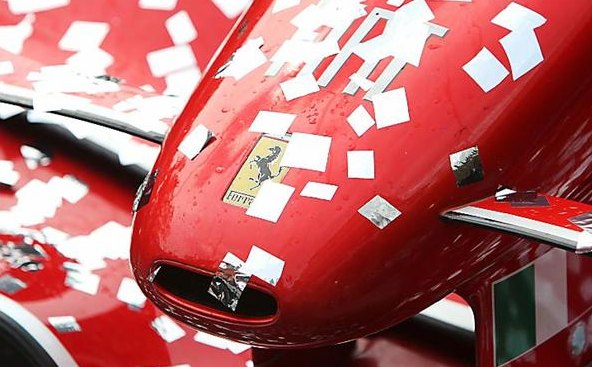 Quick, weigh that car!
*KIMI WINS THE DRIVER'S CHAMPIONSHIP:  Right from the start, it was obvious that this was going to be an... interesting race.  Massa held off Raikkonen, and HWMNBN got past Hamilton by turn 1.  And this is where the rookie made his first mistake: he didn't need to race his teammate.  He just needed to stay close to him, and he'd win the DC.  Instead, Hamilton tried to retake his position and blew the turn, tumbling down the order.  Even then, things were not out of hand, and there was still an entire race to run.
Then Hamilton's car broke.  The Legendary Announce Team almost immediately diagnosed the problem as the automatic clutch on the McLaren, and while he frantically tried to engage the fail-safe mechanisim that'd let him get on with the race (though at slightly reduced capability), he fell all the way back to 18th.
Meanwhile, the two Ferraris rocketed off into the distance.  HWMNBN was third, but was never close to catching either of them.  All that was left was figuring how Ferrari would get Kimi past Massa for the lead, and would Hamilton manage to haul himself up to fifth, in which case he'd still win the DC.
In the second round of pitstops, Ferrari brought Massa in a couple of laps early, allowing Kimi to rip off two very fast laps before HIS pitstop.  When he came back out, he had gone from a few seconds behind Massa to less than a second ahead.  Meanwhile, Lewis slowly dragged himself up to seventh, but it was late and he was 20 seconds behind sixth.
When the race ended, the longest of long-shots, Kimi Raikkonen, had managed to come from seven points behind in the DC to win the championship by the slimmest of margins: one point.

*UTTER DEJECTION:  There's no way that Lewis Hamilton could be feeling anything other than horrible right now.  He had the championship wrapped up, and two mistakes in two races cost him the ultimate prize.  In China, he beached his car in the smallest graveltrap of the season.  In Brazil, he ran wide while needlessly racing his 'teammate', grinding his car over a curb, which may have caused the damage that caused his electronic clutch system to fail.  In replays, pieces of his car are seen flying off; perhaps the shaking and rattling made a connection come loose.  Rookie mistakes cost him the most important prize in motorsports. 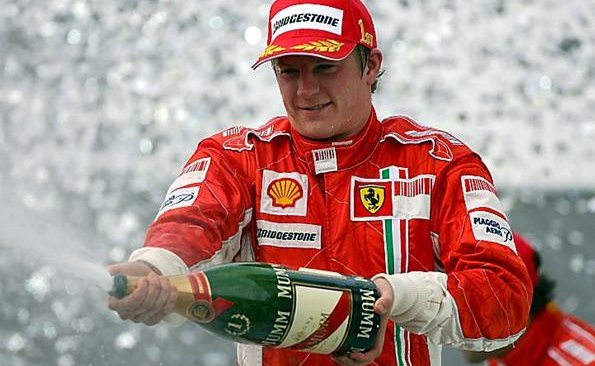 Drink!  Drink!  Drink!
*DRIVER OF THE RACE: Kimi Raikkonen, Ferrari.  He drove a perfect race.  He won it on the track, instead of by any Ferrari chicanery.  And he came from third in points to win the Driver's Championship.  What more can you ask for from a driver?

*TEAM OF THE RACE: Ferrari.  1-2 on the podium, nearly forty seconds ahead of third place, and dual championship victories, Constructor's and Driver's.  Not to sound repetitive, but what more can you ask for from a team?

*MOVE OF THE RACE: On lap 61, Nick Heidfeld is 4th, Nico Rosberg is 5th, and Robert Kubica is 6th.  Rosberg makes a move inside Heidfeld, who barely moves until the last instant.  Both drivers wind up losing just a little bit of grip on braking, and slide wide... and Kubica blows the doors off of both of them, jumping from 6th to 4th in one sweet move.  Honorable Mention goes to... Robert Kubica, for his muscular pass of Mark Webber at turn 1 of lap 8.

*MOOOOOOO-OOOVE OF THE RACE:  Sometimes even the best drivers in the world have sub-optimal days, like Lewis Hamilton.  Then there are those drivers who would LOVE to have a sub-optimal day, because it would make their race better.  It's those wretched racers that the Mooo-oove was created for, and today, we're pleased to present the MotR to a very deserving recipient: Renault's Giancarlo Fisichella.  Last year, we were amazed that Renault would willingly name Fisi their number-one driver, and he didn't disappoint; finishing with 21 points, NINE behind his teammate, the rookie Heikki Kovaleinieninnie.  Ah, but today was was the true low point of his season.  On lap two Fisi ran wide and rolled off-track.  Not bothering to check around him, he blithely drives back onto the asphalt, right in front of the fast-moving Spyker (welllll...) of Sakon Yamamoto.  The result? 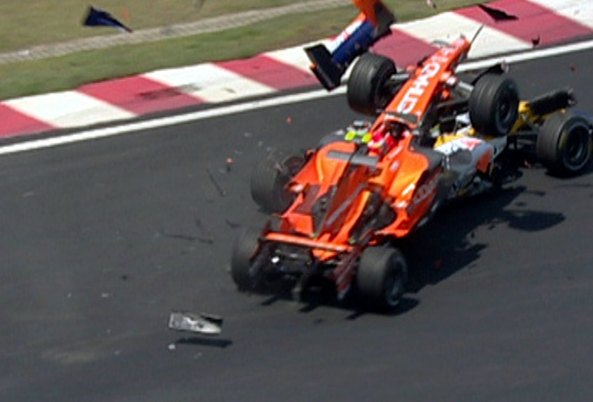 "There'd better be a lot extra in my pay envelope this week." - Felipe Massa

"At least that punk didn't win it." - HWMNBN

"Next year.  Next year.  At least I got the Move of the Race... AND the Honorable Mention." - Robert Kubica

"I am still quite happy. To have come from GP2, who would have thought I'd be number two in my first season in Formula One?  I will go into next season with my head held high and I know we will do a better job next year and come back even stronger." - Lewis Hamilton

"Was I ever on TV today?  Even when Hamilton passed me for seventh, I was in the pits." - Jarno Trulli

"I'll be driving in F1 next year, no worries." - Ralf Schumacher (note: someone should REALLY tell him...)

"Sure, my season dropped away after Montreal, but oh what a season!" - Takuma Sato

"Can you believe I survived the year?  I'm the first SuperAguri driver not named 'Takuma' to last more than nine races." - Ant Davidson 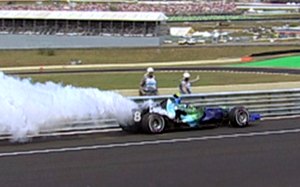 "I don't remember what happened to me.  Why did I end up 37 laps back again?" - Sebastian Vettel

"Another race, another retirement.  That about sums it up for our season, yep." - Jenson Button

"I was in bloody fifth when the car broke AGAIN.  I tell you, we'd be dangerous if we were any good." - Mark Webber

"How do you say 'AIEEEEEEE!' in Italian?" - Giancarlo Fisichella

And so, the 2007 F1 circus comes to a close with a remarkable result.  But fear not, F1 UPDATE! still has another appearance coming up... the 2007 YEAR IN REVIEW, with the year-end awards, to boot.  Keep an eye out, and we'll see you soon!

Thanks for sticking around!

Well, if Hamilton couldn't have won, I'm glad Kimi did.  I think I actually saw him smile.

At least Alonso didn't win and he came in behind Hamilton.  Neener neener.

2 I can't believe the most bovine action of the race didn't go the Kaz Nakawhata(?) for plowing into one of his mechanics on his what?  First real pitstop in F1?

We're cruel, but not sadists here at F1 UPDATE!.  If the two mechanics hadn't've been wheeled off on gurneys, then Kaz Nakajima almost certainly would have won.

But even with that, I'm not sure.  After all, Fisi acting like Spyker's very own launching pad was pretty spectacular.

4 Very true, and I guess you could also throw experience into the ring.  Failing your first in-race F1 pit stop is much more forgivable than failing to re-enter traffic properly for the Brazillianth(sorry) time in your career.

5 FINALLY, someone reacts to my stupid Brazillian jokes (that's a lot of jokes!)...