F1 Update!: Belgium 2011 Not Coming Tonight ...and I don't care.  I'm not in the mood to write about the 2011 Grand Prix of Belgium.  I may never write about it.  Seb Vettel won, Hamilton crashed, Slappy had a great race and finished 5th.  I'm tired, I'm irritated, and to be blunt, I just don't feel like spending two or three hours trying to create a coherent narrative about the race right now.  Here's Hamilton obliterating an advertising panel... enjoy. 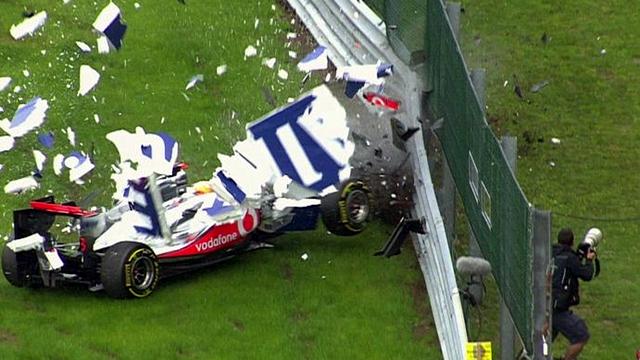 1 I like Hamilton as much as the next guy, but what we have here is a pattern. If he keeps driving like this, he's going to get someone hurt. Hell, he couldn't even avoid contact with other cars in Quals, after the session!

Also, is it true that Mark Webber's race-starting mojo has been stolen by a voodoo ritual?

2 It was an interesting race, it would be a shame if you didn't do at least a minimal writeup.  But there is no hurry, I prefer a rested and sane wonderduck to an F1U.

Are you at least earning extra pay or comp time for all the extra work you're doing?

3 With all that crazy stuff at work it's no wonder F1 has to take a back seat. BTW, Hamilton changed his mind and accepted the responsibility.

4 I caught some of the GP2 race before the F1 event, too. They started mostly-dry and then the skies opened up... a good chunk of the race happened behind the safety car, after a couple spins, and then something like half the field dropped out or wrecked under the safety car! They speculated that water was getting into the electronics, or that the cars were falling too low in temperature and their engines were shutting down... and that caused additional collisions, and that kept the safety car out longer...

6 Gosh, I'm sorry Thomas.  I should have done that as soon as I got home on Friday after working 55 hours in the past week, and 64 the week before.

7 (Wonderduck's note: Edited for profanity)
You don't have to be an a***hole about it, I was just looking forward with my brother to your F1 update, next time I won't bother.

8 Perhaps I didn't have to be, Thomas, but it sure felt good.  No apologies, no regrets.

9 Wow.  Just Wow.  I'm grateful we got an F1 Update at all.  I hope Wonderduck did most of the work on it before he saw your post, Bland, because my reaction would have been "well, you're not getting one now."  Probably with profanity.
Just to begin with "Where is my F1update".  I don't know.  Maybe you should look for your update somewhere dark and smelly.  The F1update that Wonderduck chooses to share with us, on the other hand, appears at a time and in a manner Wonderduck chooses.  And we're grateful for it when it does.

I always hated it when certain readers came to feel they had an entitlement to my work.

11 David, I had intended to write it tonight anyway... and he nearly did cause me to drop it altogether.  I could have spent those two hours doing something else.

But I've only missed two F1U!s since I started this blog six years ago (one due to my mother's passing, one due to weather), and I didn't want to make Spa a third.

12 I'm sure Wonderduck will give you a full refund of all monies that you paid to....wait.
It's free.
It's a hobby.
Its his time, his blog, his rules his programming.

I vote for ducks.

14 Posted by: David at September 04, 2011 10:18 PM (Kn54v) "Just to begin with "Where is my F1update".  I don't know.  Maybe you should look for yourupdate somewhere dark and smelly.  The F1update that Wonderduck chooses to share with us, on the other hand, appears at a time and in a manner Wonderduck chooses.  And we're grateful for it when it does."