F1 UPDATE!: Bahrain 2008! It was a special day for one team, a dominant day for another, and a disaster for a third, but it's always a great day for F1 UPDATE!  Let's get to the race!

*NOT AS GOOD AS WE HOPED...:  We at F1 UPDATE! thought that this was going to be a "helluva race" after Quals.  Well... not so much.  Felipe Massa blew a wheel-spinning Robert Kubica off the line when the lights went out, and the race was over.  Then it just became a question of which Ferrari would win, and by how much.

*APPLY HAND TO THROAT, SQUEEZE.:  That must have been the McLaren race plan for Lewis Hamilton.  First he nearly stalled the car at the start and lost 10 places, then he crunched into HWMNBN, lost his nose, and suddenly it wasn't a question of "can he win," it was "can he get points," then finally "can he finish in the top half?"  The answer in all cases was "nope."  We at F1 UPDATE! are on record as thinking that Hamilton may be weak driving in traffic, and Bahrain has done nothing to change those thoughts.

*DRIVER OF THE RACE:  Felipe Massa, Ferrari.  With two DNFs in the first two races, and rumors of HWMNBN being considered to take his seat next year, Massa desperately needed a good race, if only to get the rabid Italian press off his back.  He got it.  He got past Kubica before the first turn, then drove a nearly flawless race the rest of the way.  The only bobble was a quick on-and-off around the halfway mark as he was about to put a lap on a Farce India.  This was even his first win from a position other than pole... all in all, a pretty good race for Felipe Massa.

*TEAM OF THE RACE:  Ferrari finished 1-2, but they don't get this designation today, if only because they're expected to finish 1-2.  Besides, I suspect that even they would (in private, quietly, where nobody else could hear them) admit that BMW-Sauber deserves the award today.  Kubica was pole sitter, finished third and is fourth in the Driver's Championship, Nick Heidfeld was 4th, had the fast lap of the race (for the second race in a row) (Koveleininninnie deep-sixed that at the end of the race), and is now second in the Driver's Championship.  But more importantly, the team is now leading the Constructor's Championship for the first time ever.  Yep, they may not quite be in position to compete for a win just yet, but they are definitely for real.

*MOVE OF THE RACE:  The best place to pass on the Bahrain circuit is turn one.  Generally, the best way to do it is to get to the inside of your target and outbrake him.  You saw that exact thing occur a number of times today, as a matter of fact.  On lap 4, however, Robert Kubica was trying to hold off Kimi Raikkonen for second place and it looked to all of us here at F1 UPDATE! that he'd managed it.  He had the inside line closed off solid, and the speed difference between the Ferrari and the BMW isn't so great that Kimi could get past before the turn.  Kimi then surprised us, the announcers, Robert Kubica, and Mrs Edna Snodgrass of Llanberis, Wales (who wasn't even watching) by going to the outside of Kubica's BMW... and making it stick.  He then managed to keep Kubica from repassing by raw power.  A skillful pass, and one well-deserving of the MOTR.

*MOOOOO-OOOVE OF THE RACE:  Even the best racers in the world have moments where they chew their cud and lumber around the circuit.  For those entertaining incidents, the Mooooo-ooove was created.  Today's winner is actually two seperate incidents from the same man: Lewis Hamilton.  First, he had the worst start in the history of mankind, dropping 10 places in the blink of an eye, when he managed to nearly stall his McLaren.  A brisk walking pace would have passed him, quite honestly.  That's bad enough, but on Lap 2, while trying to recover from his atrocious start, he was all over the back of HWMNBN.  The Renault was heavy with fuel, and couldn't accelerate as quickly out of a turn as the McLaren.   Hamilton neglected to consider this fact, and the result? 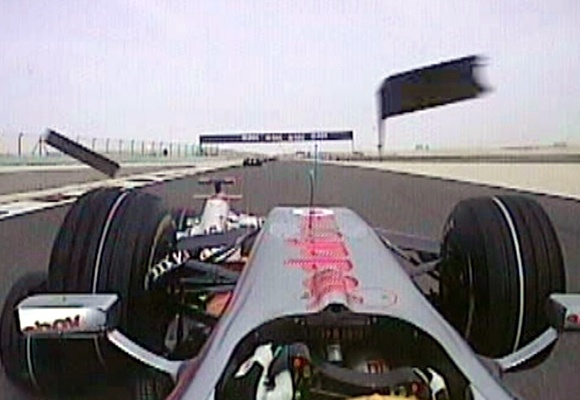 Ladies and Gentlemen, we have liftoff!!!
A lost nose and the resulting pitstop put Hamilton nearly 1:10 behind the leaders, and his day was done.  Well done, lad... here's your Mooooo-ooove!

"I am the King of Poland!  Bring me your finest pierogi and kapusta!!!" - Robert Kubica

"How did I end up second in the Driver's Championship? It's a mystery to me." - Grizzly Nick Heidfeld

"I'm not used to finishing behind anything other than red or silver cars.  I don't like it, no sir.  By the way, where'd the 'Team Leader' finish again?" - Heikki Kovelaineninnie

"Funny how the team got better when Ralfy-boy left, isn't it?  Hmm..." - Jarno Trulli

"I have absolutely nothing interesting to say today.  Sorry, lads." - Mark Webber

"I think my car actually got faster after Hamilton reprofiled my rear wing with his tire." - HWMNBN

"Today, I'm not going to drink until after the interview... why are you all laughing?" - Rubens Barrichello

"Y'know, if you squint a little bit, our Force India cars look a lot like McLarens... and we were faster than one of 'em today, too!" - Giancarlo Fisichella, smartass.

"Hey, who put that wedge under the gas pedal?" - Lewis Hamilton

"I didn't maim anybody." - Kaz Nakajima

"There's not much I can say about the race.  I did finish on the same lap as Hamilton, so that's a start." - Ant Davidson

"Unfortunately I became a bit of a pinball as a couple of cars bounced off either side of me.  That's been happening a lot recently, hasn't it?" - David Coulthard's Chin

"I'd say something, but nobody listens to Force India drivers... hey, where'd everybody go?" - Adrian Sutil

"My gearbox exploded.  This result is not what we wanted." - Nelson Piquet Jr. (with the understatement of the race)

"First I get cut off by a Farce India and lose a nosewing.  Then someone else sideswipes me and makes my suspension all oogly... on the same lap.  If I didn't have bad luck, I'd have no luck at all... but, on the other hand, I'm 20 years old, good-looking, and I drive F1 cars for a living.  I suppose I shouldn't complain, should I?" - Sebastian Vettel

And so, the first overseas stint of the season comes to an end.  The next race is three weeks from now, at Catalunya, Spain, and assuming the Boss of F1 UPDATE! isn't caught in some sleazy Chelsea flat with some prostitutes for his 40th Birthday, we'll be here with all the coverage!

Of the race, not the prostitutes.

I was glad to see Masa get the victory, since I'd hate to see any opportunity for HWMNBN to move to Ferrari.  He would be totally insufferable then.  (As oppposed to only partially insufferable now.)

I can't wait til the first Polish Victory Lap.

And how embarrassing for Mad Max to be told by the Crown Prince that he was not welcome in his country.  Naughty boy.

2 Hamilton doesn't seem to be doing anything like as well this year. Difference in cars? Bad luck? Sophomore jinx?

3 Too early to tell, Steven.  He's got 14 points in the Driver's Championship, good for a tie for third (with Kovaleinnininnie and Kubica).  Last year, he had 22 after three races.

Basically the difference can be chalked up to scoring zero points in this race, which was entirely his own fault.  He certainly didn't look bad in the first race...

So, maybe it IS a sophomore jinx.  If so, Kovaleinnininnie (also in his second year) is showing that it's not bothering him at all, which makes me wonder (again) if Hamilton is the amazing prodigy we thought him last year.  Hm... there's a post in there somewhere.

4 IIRC, the fastest lap belongs to Kovalainen, which pulled it off for no good reason at the end of the race when he wasn't near anyone, the showoff.

5 Yah, I found that out just as I was about to leave for work this morning and didn't have time to make the edit.  It should be fixed now.

6 Please, please, please... as much as I've loved Ferrari since I was about 12 years old... I'd have to give them up if they put HWMNBN in the car. Not to mention... the Old Man would have hated him!