F1 UPDATE!: AUSTRALIA 2008! Ahhhhh, the first race of a season... always full of wonder and questions.  Who'll be good, who's bad, who'll surprise and disappoint?  Does the offseason testing mean anything, or is it all window-hanging?  Let's find out, and get right to the updatin'!!!

*WELCOME BACK:  If all the races were going to be like this, there'd be a lot more fans of Formula 1 out there.  While the winner wasn't really ever in too much doubt, everything behind the McLaren of Lewis Hamilton was up in the air all day.  This race, you saw some of the best driving you'll ever witness, as well as some of the worst, sometimes from the same person.  The reliability of the cars came into question with 14 racers ending up on the side of the track due to accident or breakdown (there was also one driver DQ'd).  To be fair, the air temps were hovering around 100oF. all day, and that's really tough on these cars, but still and all.  Now, since it's the first race of the year, you can't really put too much stock in the overall results... but boy, was it fun.

*WHAT THE...?:  Last season, Ferrari swept the Driver's and Constructor's Championships (with a little help from the FIA's exclusion of McLaren) in a solid display of how to do things in Formula 1.  In this race, however, Ferrari looked more like Joe's Garage And Lube Racing.  Massa running out of fuel, Kimi discovering that it's easy to pass when you don't hit the brakes (but hard to make the upcoming turn), then that it's good to have your tires on the track when you decelerate.  Then there were the disorganized pit decisions that Ferrari made (why keep Kimi out on the track during a yellow when everybody in the park knew he'd have to pit in a couple of laps anyway?).  Basically, Ferrari looked amateurish, and they were lucky to have earned a single point today... and it took a DQ ahead of them to get that.  One imagines Ron Dennis is smirking tonight.

*DRIVER OF THE RACE: Lewis Hamilton, McLaren.  A 10 second lead by lap 15, a 30 second lead late, he was only out of first place for 5 laps due to pit-lane rotations.  While Kubica gave him a challenge at the start (you can't be any closer to each other without being naked), that only really lasted for two or three laps.  After that, the only question was would Hamilton keep it on the track and would it hold together?  The answer to both was yes, and Lewis ran away with it.  His first stint was particularly impressive, setting and resetting Fast Lap on laps 3, 5, 6, 7, 9, 11, 13, 14, 15 and 17.  That's domination.

*TEAM OF THE RACE: Williams.  Nico Rosberg gets a podium, Kaz Nakajima in the points, and the only team other than McLaren to get both cars to the end of the race?  Considering how miserable a season Williams had last year, it's good to see them have a good race for once.  McLaren gets an honorable mention for their Win-5th, which is nice, but they've got to be kicking themselves for losing a great chance to steal a march on Ferrari.

*MOVE OF THE RACE:  On lap 57 of 59, Heikki Kovelaineininnie was challenging Renault's HWMNBN for 4th place.  Considering that HWMNBN drives a very wide car, and the antipathy he has toward McLaren, there's no chance that Heikki would have an easy pass, and it wasn't.  But it WAS a clean, firm, and impressive move.  That Heikki threw it away a half-lap later by pressing the pit-lane limiter on the front straightaway (allowing HWMNBN to blow past the suddenly slow McLaren) takes nothing away from the move.

*MOOOO-OOOOVE OF THE RACE:  Celebrating the bovine lurking inside every F1 driver, the Mooooo-ooove is given to the driver or team that has the clumsiest moment of the race.  This week, Timo Glock's Toyota slid a little too far out of a turn, got into the grass, and wallowed around in a more-or-less uncontrolled fashion.  It should have been fine, if embarrassing, but this is Melbourne's Albert Park.  When it's not being used for the Grand Prix, it's just an ordinary (if large) park/golf course/lake facility.  Glock skittered across the grass, crossed a strip of asphalt, and hit a very tall lip back onto the grass.  The result?  Well... not good: 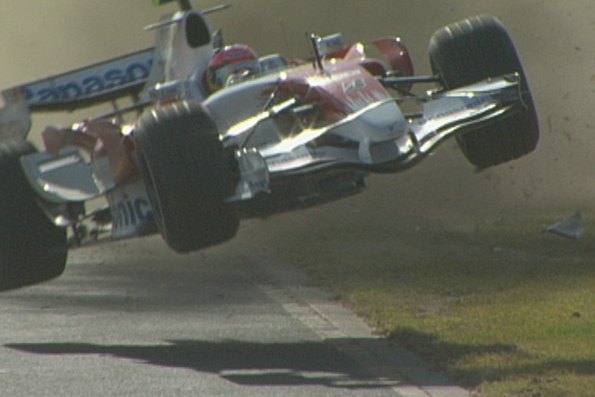 Avert your eyes, women and children...
Mental note: F1 cars are not meant to be dropped.  It took Glock a long time to get out of the cockpit, undoubtably with a very sore back.  Maybe his Mooooo-oooove will help sooth the pain.

*DRIVER QUOTES OF THE RACE:
"It was a good race, the car is fantastic to drive, and the team has done a superb job.  I can go even faster." - Lewis Hamilton (note: real quote.)

"I was the OTHER first.  Y'know, the one that actually had to race." - Grizzly Nick Heidfeld

"It's a great feeling to be on the podium in F1.  It's been a while since I've been here." - Nico Rosberg

(editior's note: this was far and away the happiest, friendliest podium we've seen in a long time)

"So, still think I made a mistake coming back to Renault?  Just wait, I'll be passing that snotnosed brat in no time..." - HWMNBN

"What was I thinking?" - Heikki Kovenlieninnininnie

"At least I didn't run over my pit crew, and I got to the end of the race." - Kaz Nakajima

"Somewhere around lap 45 I began thinking 'SeaBass, can you believe that you're in your first F1 race and you've got a chance for a podium... in a Toro Rosso?'  Then the engine broke." - Sebastien Bourdais

"I am the saddest boy on the planet." - Robert Kubica

"Everybody's talking about Kimi's pickup of 7 places on the first lap, and how great that was... you do realize I picked up 9, right?" - Takuma Sato

"A horrible start to the season.  The accident with David Coulthard's Chin was all his fault." - Felipe Massa

"I'm going to track him down and kick three colours of shit out of the little bastard."  - David Coulthard's Chin (note: real quote)

"So the battery began to get warm under the seat, then got hotter and hotter until I couldn't sit in the cockpit anymore.  Then it exploded." - Jarno Trulli

"The name on the team may be different, but some things never change..." - Adrian Sutil

"I had a good run down to Turn Three, but then Nakajima came along side with no front wing. I thought ‘this will be interesting’ and then I was out of the race.  Dammit." - Mark Webber

"I got squeezed between Webber and Nakajima, just had nowhere to go.  I did manage to bring it back to the pits, so that's something, right?  Considering how low-budget we are right now, not having to pay for a tow is worth the effort." - Ant Davidson

And so the first F1 UPDATE! of the 2008 season comes to a close, but never fear!  We'll be back next weekend with our coverage of the Malaysian Grand Prix!  Will Ferrari bounce back?  Will McLaren consolidate?  Can Williams and BMW keep going?  Tune in and find out!

What a way to start the season!  A new generation of drivers running up front and even on the podium.

I felt so bad for SeaBas since things were looking good for him.

And Heikki is so much easier to understand that Kimi.

(I hope HWMNBN won't be too disappointed if he doesn't get a chance to pass the snot-nosed brat anytime soon.)

Can't wait for next week!

One amazing race by all accounts.

3 Superb race, but what I want to know is, what was that bizarre noise during the post-race interview?

4 ...what was that bizarre noise during the post-race interview?

5 Button didn't even finish one lap? What in hell happened to him?

Accident in the turn 1 complex, Steven.  Happens almost every race: 22 cars charge down from the start/finish line at full speed, then have brake from 160-180mph to 80mph and stuff themselves into a space big enough for 3 cars (maybe).

Someone ALWAYS loses a nosewing, or gets a broken suspension, or gets punted into the kittylitter.  This time around, there were a BUNCH of people who got caught, Button being one of 'em.