F1 Update!: Abu Dhabi 2016 Say what you want to about the Yas Marina circuit, the chances of having anything other than perfect weather for a race there are vanishingly slim.  In was in this atmosphere that polesitter Lewis Hamilton led the rest of the F1 Circus to the grid.  Next to him, teammate and championship points leader Nico Rosberg had plenty of reason to be confident.  He didn't need to win the race to be Driver's Champion after it was all over... he just needed to be close to Hamilton, and he'd win on points.  Hamilton needed help from other drivers... would he get it?  THIS is your F1Update! for the 2016 Grand Prix of Abu Dhabi!

*LIGHTS OUT: Though it pains those of us at F1U! to say it, when Lewis Hamilton is motivated, focused, and on his game, there is nobody in the field that can beat him.  And thus it was today, when he rocketed off the line without a care towards his teammate, winning the race to the first turn and jumping into the lead.  But instead of rocketing off over the horizon as has happened in way too many races over the past few years, he did not pull all that far away.  It was pretty clear that Hamilton was controlling his pace to allow the field to stick close and threaten Rosberg.  He couldn't do it for long, as his ultra-soft tires weren't going to last forever... or even 10 laps.  On Lap 7, the leader pitted, and could only hope that his delaying tactics would pay off during the pit rotation.  As it turned out, they nearly did.  After Rosberg pitted, he rejoined behind Hamilton, but just barely ahead of Ferrari's Kimi Raikkonen.  As it turned out, the Finn was the slowest of the "big six".  Being stuck behind him, even for a short while, could have done serious damage to Rosberg's race.  Bullet dodged, the race continued.

*THE MIDDLE: Let's be honest here... this was not an exciting race, save for the way it was deciding the Driver's Championship.  The middle thirty-odd laps were dreadfully boring, with the leaders just grinding out the laps one after the other on a visually uninteresting circuit.  The F1U! crew wound up dozing off twice during this stretch, that's how dull it was.

*THE END:  As the race reached approximately Lap 50,  Lewis Hamilton still led the race ahead of Nico Rosberg, Red Bull's Embryo Verstappen, and Ferrari's Seb Vettel, all of whom were covered by less than three seconds.  Smiley Ricciardo in the second Red Bull was just a couple of seconds behind the front pack as well.  Vettel, however, had the freshest tires and had been tearing huge chunks of time out of the leaders, passing Verstappen on Lap 50.  And then Hamilton began to slow.  Not because of a technical problem, but because his best chance to win the driver's championship was if he could push his teammate into the clutches of Vettel and Verstappen.  Hamilton would saunter through the twisty third and first sectors, driving a wide car and staying just far enough ahead to make a pass attempt unwise.  Meanwhile, in the fast second sector, he'd go as fast as he could to keep Rosberg from getting by in the DRS zones.  The strategy was working, too.  Rosberg was furious, calling the pit wall and telling them to get Hamilton moving.  The Mercedes honchos agreed: Hamilton wasn't just jeopardizing Rosberg's position, but entering a not-trivial chance of losing the lead altogether into the equation.  Twice Paddy Lowe, the Mercedes technical director and race boss got on the radio to Hamilton, telling him to pick up the pace.  The second time, he specifically said "Lewis, this is an instruction."  No chance of a misunderstanding there!  Hamilton's response was "I'm leading the race, I'm perfectly comfortable."  Vettel actually got close enough to Rosberg to launch two attacks, neither of which were particularly hard to fend off, and the race ended with less than a second covering the podium drivers, Hamilton leading Rosberg by .3 seconds, and Vettel a half-second behind him. 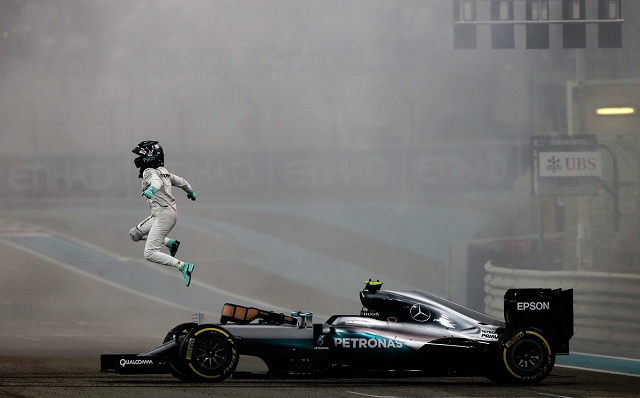 We here at F1U! are somewhat disgusted with Hamilton, as he was rather ungracious after the race was over.  During post-race interviews, he flat-out said his car "had a lot of problems this year, and that's why we're here now."  If he ever congratulated Nico Rosberg, we must have missed it.  Mercedes Team Principal Toto Wolff has already stated that the team is greatly annoyed with Lewis Hamilton for disobeying team orders, too.

Hasn't the ship kind of sailed already when it comes to marquee drivers and team orders? You can tell Massa to let Alonso by (well, these days you can...) but just try telling Vettel to stay behind Webber. I was actually kind of surprised to hear them attempt the order the second time - they had to have known that it wouldn't actually work, right?

I still think that the tire degradation is killing the sport. In an effort to keep pit management relevant after removing refueling, they've created a situation where drivers can't actually race each other without chewing up their tires and ruining their race day. And so we get a parade where the winners are the ones who can consistently turn in a time trial at exactly the required time, and the spectacle of the world champion, driving the highest-performance racing car on the planet, complaining that the leader was going too slow. Well, Nico, if you aren't happy about that, why not try @$)#% racing him?

We can only hope that those big fat tires can last on the track. I'd rather have one-stop strategies and cars that could get into duels that last three or four or ten laps, rather than the modern "pass during DRS or stay the heck back" snoozefests.

2 F1, where even the winning team isn't happy with the entire situation. Oof.

3 Hmmm, maybe a penalty for disobeying a direct instruction. What would 5 seconds do to his standing in that race....

If you DID add five seconds to his time, he still loses the Driver's Championship, so it's not like it's a great hardship.

5 Ah, sorry, I misread. I thought the officials were saying he was creating a hazard with that kind of driving.

6 Yeah, Hamilton was pretty jerky.  I do think he's a better driver than Rosberg, but this just wasn't his year, and his tactics at the end of the race were, frankly, douchey.  But there's not a whole lot Mercedes can do other than make passive-aggressive comments about him to the press.  It's not like they're going to fire a driver of his caliber.  I guess they could penalize him monetarily for breach of contract (assuming what the announcers said during the race about obeying team instructions being in all the drivers' contracts is true), but do they want to risk making him angry enough that he goes off to drive for a competitor?

7 And in the wake of his driver's championship win, Nico Rosberg retires!

Okay, Seb, time to switch teams again, for the greatest teamup/showdown in F1 since...well, I don't know, I've only been following F1 about three years, and my knowledge of F1 history is still woefully inadequate.  In any case, assuming Mercedes stays ahead of the curve, could you imagine Seb and Lewis going head-to-head each race in equal cars?

In all honesty, of course, in the name of more interesting racing, we should all hope that Red Bull and Ferrari continue to close the gap, but if Mercedes remains where they are, a Vettel/Hamilton tandem would be the next best thing.