F1 Update: Abu Dhabi 2015 Night was falling as the Mercedes of Nico Rosberg led the assembled field to the grid at Yas Marina.  Behind him was world champion Lewis Hamilton, who began complaining about that fact days earlier.  Carrying the hopes and dreams of Italy was the third car on the grid, the Ferrari of Kimi Raikkonen.  The oddball of the bunch sat in fourth position, the Force India of Sergio Perez.  How would these worthies shake out at the end of the day?  There's only one way to find out: THIS is your F1 Update! for the 2015 Grand Prix of Abu Dhabi!

*OH JEEZ... REALLY?:  When the lights went out, the usual headlong dive for the first turn began.  Polesitter Nico Rosberg easily outpaced his rivals while Hamilton's poor start meant that he had to scramble to keep Raikkonen behind him.  He accomplished this feat, which gave him a grandstand view of Rosberg galloping away.  It wasn't a huge gap, only five seconds by the time first Rosberg, then Hamilton, pitted for new tires on Lap 10 and 11, respectively, but that would prove to be plenty.

*SO MUCH FOR THAT:  The one true important contest remaining in the World Driver's Championship was for fourth.  Williams' Valterri Bottas led Raikkonen by a single point... whichever man finished ahead of the other would take the position.  Bottas and Williams took all the drama out of the duel early.  First Bottas peed the start down the leg of his firesuit, dropping to 10th by the end of the first lap.  Then during his first pit stop, the team released him just as the McLaren of Jenson Button angled into his pit box.  The collision snapped the left side of Bottas's front wing clean off, and for whatever reason the team told him to leave the pits and return instead of stopping and having the mechanics pull him back.  In any case, by the time he got his car around and the nose repaired he had dropped to last place and was never seen again.

*OH... HIM?:  Due to a massive screwup in Quals by Ferrari, Seb Vettel started the race pretty much at the back of the field.  He sure didn't stay there long; by the end of the first lap he was 12th, and then settled into tire conservation mode.  While his rivals began pitting on Lap 9, he didn't make his first stop until 14 laps later, at which point he was in fourth place!  After the stop, he had fallen to 6th, but by babying his tires he managed to work his way back up to fourth, practically without having to pass anybody on track.  Maybe a boring strategy, but an effective one.

*BACK AT THE FRONT: The second stint was much more friendly to Hamilton, allowing him to close the gap to his teammate almost to DRS range.  When Rosberg pitted on Lap 31, the entire race was there for Hamilton to take.  He had been begging for an alternate tire strategy, any tire strategy, that could allow him to take the fight to the other Mercedes, and now he had the chance.  The team left it up to him... and he let the team make the call.  Rosberg would go on to win by over eight seconds, and Hamilton would go on to say that he "You have to rely on the engineers to give you the optimum strategy at that point," but that he "didn't understand it."

*IN THE END:  The top three places were exactly the way the race began: Rosberg, Hamilton, Raikkonen.  If it hadn't've been for Vettel getting in the way, it would have been the top five places, for Sergio Perez and Daniel Ricciardo, 4th and 5th at the start, ended up 5th and 6th.  Yeah, it was that sort of "race"... and it was essentially the 2015 season in a nutshell.  Only three drivers earned victories this year, Hamilton, Rosberg and Vettel (Hamilton 10, Rosberg 6, Vettel 3).  The same three were the only polesitters (Hamilton 11, Rosberg 7, Vettel 1).  The German national anthem was heard during every podium ceremony in 2015.

*SO.:  And thus does the 2015 F1 season come to an end.  We're only 109 days away from the first race of the 2016 season, at Australia... but we'll start seeing the rollouts of the new cars a lot sooner than that.  One of them will be the first design for the new official team of F1U!, HaasF1.  We all hope that they'll be enough to make next year interesting.

Thanks for reading this year, and we'll see you soon enough!

*ALMOST FORGOT:  Noah would be pleased with the final driver's championship standings. 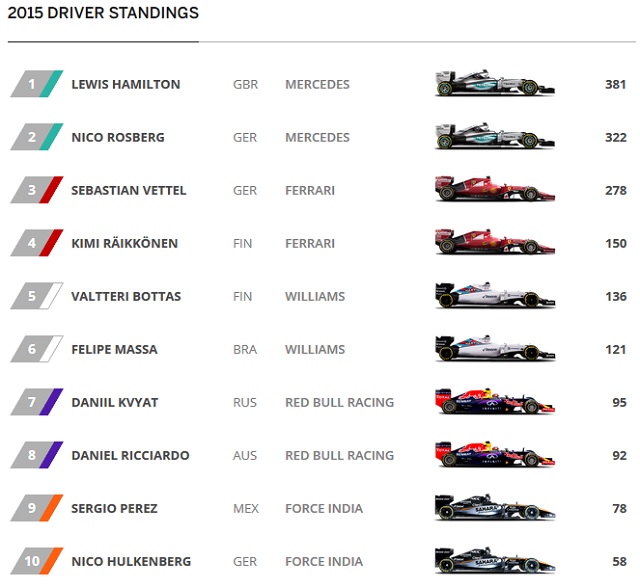 1 What significant rule changes are coming for 2016?

2 For the most part, nothing.  The biggest ones have to do with tires.

There's going to be a new tire compound, "ultrasoft".  I can only assume that they'll begin to degrade before they get put on the car and fail after one lap, but provide enough grip to snap the neck of any driver foolish enough to use them.

The other big change is that Pirelli will be bringing three tire compounds to each race instead of two, and allowing the teams to choose which two they want to use during the race.

Maybe we'll get lucky and more teams will get powerplant improvements?

4 Well, the tire thing has the potential to make things a little more interesting... one team may decide to go with ultrasoft and supersoft, for example, while the other goes with soft and supersoft.

The team with the US and SS will be bananas grippy on the track, but will have to be REALLY careful about how fast they chew through their tire allotment.  Meanwhile, the team with the SS and S choice will still get a speed boost from the SS of the two, but be able to run a lot faster on the S.

5 The only problem is that teams SHOULD have enough data to know what the deltas are for the various tire sets, by the end of P3; there will be an optimum and just about everyone will run that.

My real problem is the tire degradation. I get that they're trying to inject an element of strategy into things, but oy. This season featured damned little actual racing, because the tire degradation ensured that anyone who hung off someone else's bumper for more than a lap or two would ruin their own race as their tires gave up the ghost early. Maybe with the three sets of tires available, that will scratch the strategy itch, and they can afford to make them durable enough that the drivers will dare to close in and stay close.

6 there will be an optimum and just about everyone will run that.

Except not all cars treat their tires the same way, nor every driver.  I could see the Red Bulls, who were relatively gentle on their rubber, taking a more aggressive tire selection than, say, the Mercs.

7 And if it's threatening rain on race day, everyone will have to choose mids as one of their tires. And if it turns out to be dry, they're stuck with the other one they chose for the entire race.

8 Not necessarily, Steven.  The teams automatically get both Inters and Full Wets, so they could still go with their choice of dry tires and count on the wellingtons to get them through.