F1 Update!: 2012 Grand Prix of Japan The afternoon sky was a brilliant blue as the field took their places on the grid.  Seb Vettel's Red Bull took pride of place on pole while points leader HWMNBN was back in 6th... could the Ferrari driver catch the young German?  Could anybody?  Would Vettel take another chunk out out of the Spaniard's lead?  Or would someone like Gandalf Kobayashi, driving in his home race, make a major statement?  THIS is your F1 Update! for the 2012 Grand Prix of Japan!

*RED LIGHTS GOING OUT / THE FIELD SITS ON THE GRID / SOON THERE WILL BE WRECKS:  As expected, Seb Vettel got a clean start and began to head for the hills.  A surprise, however, was that Sauber driver Gandalf Kobayashi got a brilliant getaway and was ahead of Mark Webber within 10 car lengths.  To say that the fanatical Japanese crowd was going crazy would be an understatement.  Behind them, however, disaster lurked.

*TURN ONE APPROACHES / GROSJEAN HITS MARK WEBBER'S CAR / JEEZ, THIS SH*T AGAIN?:  As the field piled into the first turn, three separate incidents completely changed the complexion of the race.  First, Kimi Raikkonen grazed HWMNBN'd left-rear tire, flattening it and sending the Ferrari into a spin that terminated right on the racing line as the back half of the field came thundering in.  Then Lettuce Grosjean, giving the lie to his claims that he's learned how to race, tore his front wing off in the process of running into Mark Webber, who spins and suffered damaged tires.  As if that wasn't enough carnage, Nico Rosberg slowed up to avoid that incident and got creamed by Bruno Senna.  Webber was able to limp back to the pits, but Rosberg was out on the spot.  HWMNBN should have been able to continue, but his engine died in the spin.  Because of where the dead cars were located, Berndt Maylander and the Safety Car had to be called out.

*ONE LAP SAFETY CAR / VETTEL THE BEST RESTARTER / THEN HE RUNS AWAY: We've seen this scene before: once the brief safety car period ended, Seb Vettel stole a march on Kobayashi, leaving him in the dust and, for all intents and purposes, ending the race.  The only drama left was to see if the Red Bull would hold together or if there'd be another catastrophic failure that would cost him the race.  By lap 6, he had a three second lead over the Japanese driver, who was being stalked by Jenson Button, who had Felipe Massa hanging onto his rear wing.  By lap 10, the lead was six seconds; a text message from Honorary F1U! Staffer Vaucaunson's Duck suggested that the race needed "some sort of bizarre seagull accident".  We countered with everybody's favorite flying turtle: GAMERA!  Alas, no such luck.

*STOPPING FOR TIRES / WHAT'S THE SIGN OF A DULL RACE? / PASSING IN THE PITS!:  While Felipe Massa hung onto the rear of the McLaren, he couldn't do anything to actually threaten Button's position.  So when that happens, what does a team do?  They work strategy, is what they do.  On Lap 14, Jenson Button came into the pits, followed by Gandalf the next lap.  On the other hand, Ferrari kept their man out on track, telling him to run the tires off the car and push Push PUSH.  It worked.  When Massa finally stopped on Lap 18, he came out in second place, having leapfrogged both of the men he could realistically reach.

*THE RACE IS OVER / VETTEL IS GETTING SCARY / JUST FOUR POINTS BEHIND: And that's the way it stayed for the remaining 33 laps.  Vettel dominated the race, earning his second grand slam (pole, win, lead every lap, set fast lap) in the process.  Second place went to Massa who was nearly 21 seconds back.  Gandalf Kobayashi earned his first career podium, ending up some four seconds behind and hotly pursued by Button's McLaren.  The Brit was only a half-second back, after having taken some five seconds off the Sauber's lead in the final few laps.  Jenson Button's teammate, Shiv Hamilton, was fifth, some twenty second in arrears.  With the win, Vettel is only four points behind the stumbling HWMNBN in the race for the Driver's Championship, and looks head-and-shoulders the favorite for the rest of the season.

*DRIVER OF THE RACE:  In front of his countrymen, Gandalf Kobayashi drove a great race, from his fantastic start to his "none shall pass" defense of third during the last couple of laps.  In the process, he may have secured his seat with Sauber for next year.  As an aside, hearing the Japanese crowd chanting Kobayashi's name after the race was something special.

*TEAM OF THE RACE: There's nobody to give it to other than Red Bull.  They solidified their lead in the Constructor's Championship, apparently have instituted a technical change that's given their car a huge boost of speed (a double-DRS, in fact), and look set to dominate the rest of the season.

*MOVE OF THE RACE:  On Lap 6, Sauber's Sergio Perez had been sitting behind McLaren's sixth-place Shiv Hamilton for a few laps, not quite able to close the gap to the Brit, but also unable to be shaken.  Coming out of Turn 10 and heading into the Hairpin, the man who will be taking Hamilton's seat was a few car lengths back and seemingly no danger whatsoever. 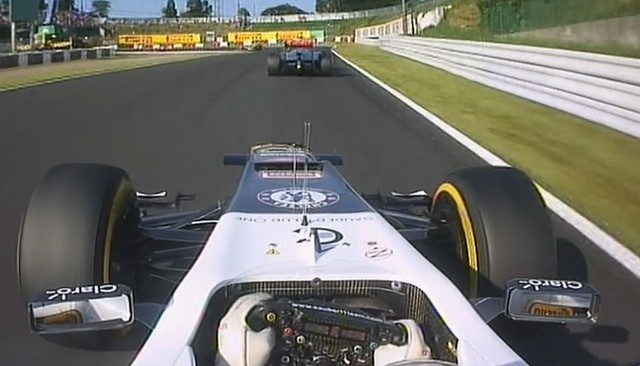 Which is exactly what the Mexican driver wanted Hamilton to think.  As Hamilton slowed for the Hairpin, the man called "Checo" decided not to bother with the brake pedal and dove really low to the inside.  Tires smoking, he finally stood on the brakes, but there was no way he was going to get whoa'd up in time. 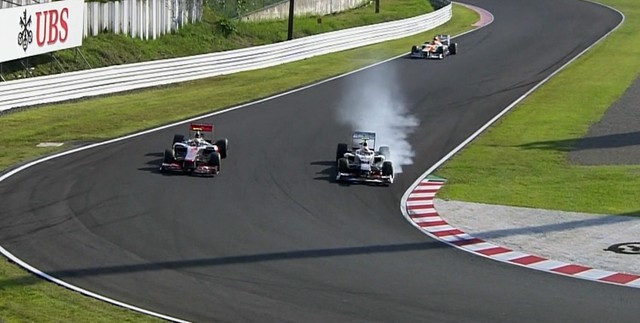 Until he did.  Using the curb to help arrest his skid, he not only made the turn, but stayed in front of the McLaren which was on the better racing line. 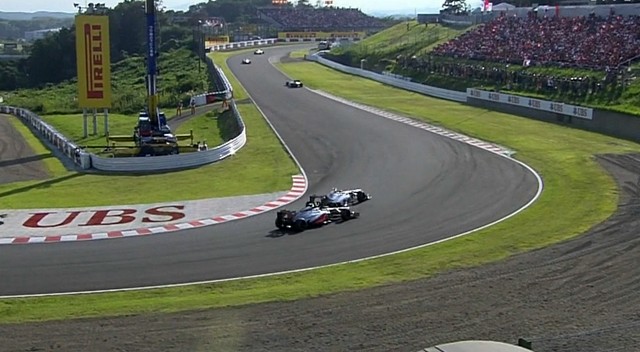 He didn't so much pass Hamilton as de-pants him in front of millions of viewers.  You don't think he was trying to show the McLaren management that they made the right choice, do you?  Congratulations, Checo, here's your MotR award!

*MOOOOOOO-OOOOVE OF THE RACE:  On Lap 19, Sauber's Checo Perez was sitting behind McLaren's sixth-place Shiv Hamilton.  Coming out of Turn 10 and heading into the Hairpin, the man who will be taking Hamilton's seat was a few car lengths back and seemingly no danger whatsoever right behind Hamilton and was threatening the position. 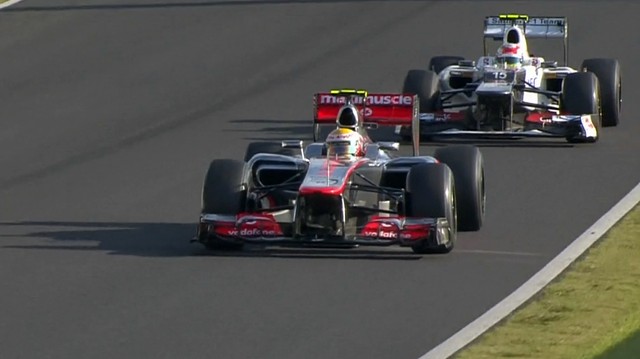 As Hamilton slowed for the Hairpin, the man called "Checo" decided not to bother with the brake pedal.  This time, however, Shiv Hamilton, remembering the move the Mexican native had made 12 laps earlier, protected the inside line.  So Perez decided to head for the outside... but something went wrong.  The car began to wobble, and instead of smoothly slipping past the McLaren, it smoothly slipped off-track. 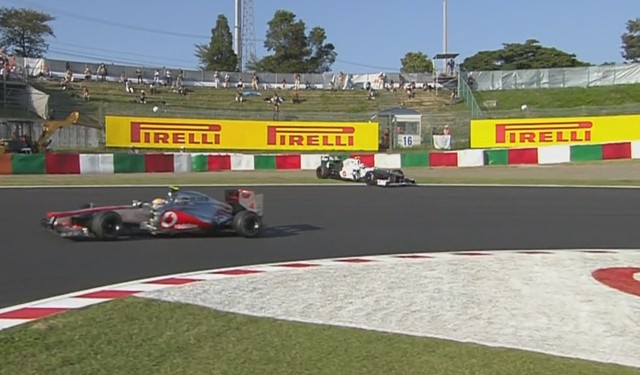 The Sauber smoothly slipped into a spin and ended up in the kittylitter protecting Turn 11, stalled and out of the race.  We're not sure, but we here at F1U! believe this is the first time we've given both the MotR and the MoooootR to the same driver as he attempted to pass the same victim in the same race.  Well done, Checo!  Here's your Mooooo!


"I AM THE KING OF THE WORLD!  BRING ME YOUR FINEST MEATS AND CHEESES!" - Seb Vettel

"Two years since I've been on the podium... I had premature champagne ejaculation up there." - Felipe Massa

"<Thank you everyone for your support, I'm very happy to be on my first podium in Japan.>" - Gandalf Kobayashi (note: real quote, translated from Japanese) 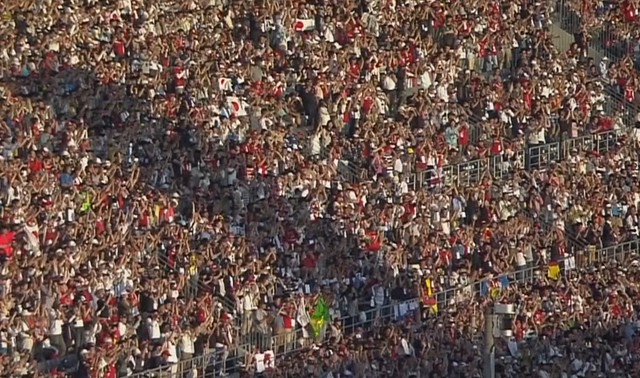 "Fourth is a good result; better'n Shiv's, that's for sure." - Jenson Button

"335pm - Just noticed @jensonbutton unfollowed, thats a shame. After 3 years as teammates, I thought we respected one another but clearly he doesn't." then "442pm - My bad, just found out Jenson never followed me. Don't blame him! Need to be on Twitter more!" - Shiv Hamilton (note: real tweets)

"I have no idea." - Nico Hulkenberg

"Eventful race.  Not that any of it involved me." - Daniel Ricciardo

"My clutch sucked today, that's why I'm down here instead of up THERE (points to podium)" - Paul di Resta

"I'm going to go down in history as the man who ended Slappy's career, aren't I?" - Jules Vergne

"There isn't enough carbon fiber in the world to support a team lineup of Maldonado and me, is there?" - Bruno Senna

"Not much to say, is there?" - Tim O'Glockenspiel

"Nobody noticed me out there." - The Red Menace

"Ever since I came back in Singapore my priority has been to be very cautious at the start, and I was watching Sergio [Perez] on my left to make sure there was no contact with him. There was quite a big speed difference between me and Mark [Webber] as I came into the first corner which caught me by surprise and we collided." - Lettuce Grosjean (note: real quote.  In short, he was looking the wrong way.)

"They won't tell me why we retired." - Narain Kittylitter

So Japan passes behind us and the Circus wings its way to Korea next week!  We'll see you then!

1 Maaaan, murdered by the social media. Bet there's not going to be Tooned #7 (unless it's already filmed and voiced).

4 I wonder if Mercedes insisted on having a "no Twitter" clause in Hamilton's new contract?

5 I think social media is here to stay. However, there may be a contract clause that prevents Hamilton from posting anywhere without first clearing it with the assigned PR person.

7 "Shiv" is an archaic slang term for a knife.