*RACE OF THE YEAR:  Sometimes a race is made great by the spectacle it provides, like the inaugural Korean Grand Prix.  But this award should be given because of the actual racing involved, and on that grounds there was no better, no more exciting, race than the 2010 Grand Prix of Turkey.  For forty laps Mark Webber, Seb Vettel, Lewis Hamilton and Jenson Button were locked in a duel that saw the four of them separated by no more than a second.  None of them could break away, but likewise neither could they close too much on their rivals,  This resulted in a remarkably tense race that made even experienced fans like those of us here at F1U! wonder just who would crack first: the young hotshot, the older and wiser teammate, or the two world champions?  When it turned out to be the young hotshot, nobody was overly surprised, but when he took out his wiser teammate in the process, the race took the leap from "pretty darn good" to "best of the year."  A repudiation of the Red Bull incident a few laps later as the McLaren teammates showed how to race each other without scattering carbon fiber all over the place was just the icing on the cake.  Want to show someone one race from 2010?  This should be it.  An honorable mention should go to the Chinese Grand Prix for reasons that'll become clear later on.
*MOVE OF THE YEAR:  This award is open to any pass for any position during any race of the 2010 season, excluding any event on Lap 1.  It doesn't have to have any dramatic implications, like for the lead or to win the Driver's Championship or anything like that: a Lotus passing a Virgin for 19th is just as eligible as a Ferrari passing a McLaren for 1st.  This year's MotY goes to Lewis Hamilton for his fantastic pass of both Mark Webber and Adrian Sutil at the Grand Prix of China.  The three drivers came down the back straight more or less evenly matched, weaving to defend their positions or get into clean air as they went.

As they approached the turn, Webber locked up slightly and went outside, Sutil took the normal line in the normal way, but Hamilton slowed late and hard, going to the inside of both.

He then got on the gas with more force than he really should have been capable of and powered by.

That Webber then tried to follow Hamilton past Sutil but was denied by the Force India driver in the next turn just made it all the better.  Honorable mention goes to Rubens Barrichello's pass of Slappy Schumacher at Hungary, made all the more impressive as Slappy was trying to murder the Brazilian at the time. 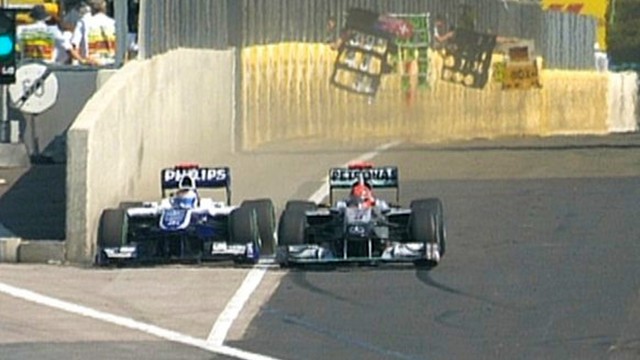 *MOOOOOOOO-OOOVE OF THE YEAR:  Everybody makes mistakes in racing.  It just comes with the territory.  When one of the best drivers or teams in the world does it in front of an estimated 600 million viewers, it gets magnified.  When it is particularly egregious, it goes from a fact of life to something more special... it becomes a "Mooooooooo-ooove."  The MooootY therefore needs to be more than just something dumb.  It needs to be epically stupid, above and beyond the merely ridiculous.  Fortunately for us there were three brand new teams of varying quality in the field this year, and one of them provided us with what may be the greatest Moooooooo-ooove of all time.  Fittingly, it too came at the Grand Prix of China.  The cars were lined up on the grid, surrounded by mechanics doing last minute adjustments before the recon lap.  The humans left, and the cars rolled off... all but one.  As we stated back then, it's not uncommon for cars to stall on the grid, but the reason Timo Glockenspiel's Virgin wasn't moving was something much, much stupider. 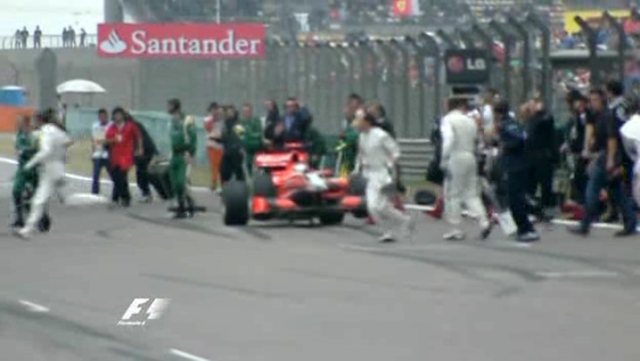 The team had left it jacked up, like Detroit street punks had been interrupted in the midst of stealing the wheels off the VR-1.  To this day an adequate explanation has yet to be forthcoming.

*CRASH OF THE YEAR:  Again, this category rules out incidents on the first lap (unless they're really really cool because, hey, cool crash!), but even with that restriction there were a surprising number of violent wrecks that qualified, like the Red Bull Incident at Turkey, the Vettel/Button accident at Spa, the Webber/Rosberg crash at Korea (is anybody seeing a theme here?), but none of these holds a candle to the winner of the CotY.  But first, an honorable mention to Lotus's Jarno Trulli and HRT's Karun Chandhok, for their low-speed wreck at the Grand Prix of Monaco. 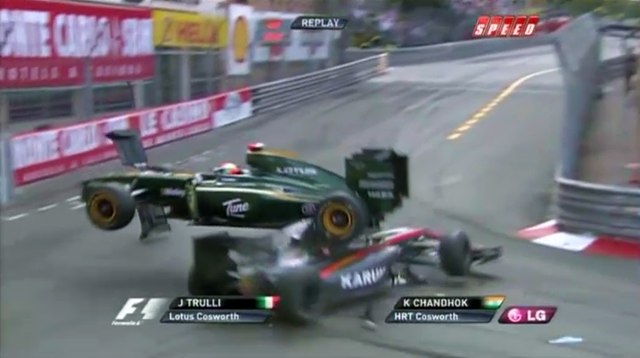 As impressive as that is, and the camera shot from Chandhok's T-bar was impressive to say the least, it's a distant second to the "winner" of CotY.  Of course, there was never any doubt on this one: Mark Webber's creation of Red Bull Airlines at the European Grand Prix @ Valencia. 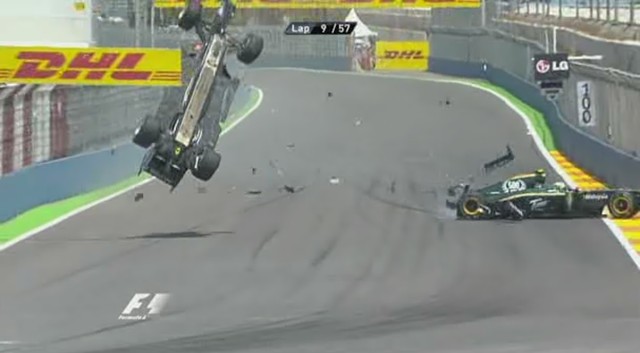 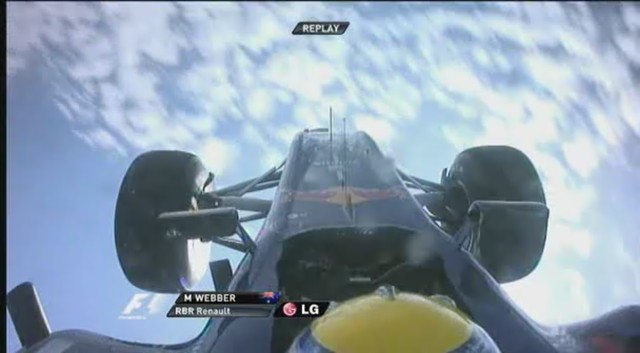 Not the sort of view one expects to see from a F1 car...
That Webber almost immediately jumped out of the car, obviously unhurt, once it stopped bouncing was one of the greatest reliefs we here at F1U! had ever experienced.

*DRIVE OF THE YEAR:  This award goes to the driver who puts in an incredible performance over the course of a single race.  This year, there is nobody who deserves it as much as Ferrari's HWMNBN for his run at the Grand Prix of Malaysia.  On the formation lap before the race had even begun, he had a little problem with his clutch: it didn't work.  For the entire race, he had to shift by stamping on the accelerator and holding the downshift paddle, hoping that the gearbox would eventually find a lower ratio.  Mind you, he did all of this while braking at the same time, usually a sure recipe for disaster as F1 cars tend not to like such things while cornering.  That he managed to get as high as eighth, setting fast lap of the race twice along the way, and dueling with Jenson Button for seventh, is nothing short of miraculous.  It actually came as quite the sad surprise, then, when his engine finally let go on him with two laps remaining.  We actually felt badly for HWMNBN, an emotion we never expected to feel towards the Spaniard.

*FAVORITE MOMENT OF THE YEAR:  Also from the European Grand Prix @ Valencia, we saw a young driver become a folk hero over the course of some 40 laps.  Kamui Kobayashi was a rookie who had showed that he had no fear during the last two races of the 2009 season, but was off to something of a lackluster start with Sauber in 2010... until Mark Webber's attempt at low earth orbit.  To steal from the F1U! for that race:
"When the Safety Car caused by Webber's crash was called out, he stayed out on track, jumping from the back of the pack all the way to third.  Of course, he'd still need to pit to change his tires, but who was to say there wouldn't be another Safety Car?  When the safety car period ended, Kobayashi suddenly became Gandalf the Grey in the Mines of Moria, bellowing 'YOU SHALL NOT PASS!' at the silver, blue and yellow Balrogs that were Jensen Button, Rubens Barrichello and Robert Kubica.  For thirty-nine laps!  It was only when he was dragged into the fiery pits on Lap 53 for his mandatory tire change that he relinquished third place... but he would re-emerge as Gandalf the White, in 9th place but on brand new soft tires with three laps to go.  He emerged from the pits reborn on fresh soft tires while everybody ahead of him were on well-used rubber.  Two cars, the Ferrari of HWMNBN and the Toro Rosso of Seb Buemi, were within striking distance.  Seemingly from the moment he rejoined the race, he was all over the back of the former World Champion, hassling him in every turn to the point that the Spaniard, who had been trying to overpower the Toro Rosso, had to let him off the hook and drive defensively.  The Ferrari just couldn't cope with the Sauber, however, and in Turn 20 of the penultimate lap Kobayashi did everything right and slipped by HWMNBN with no fuss whatsoever.  He then set his sights on the Toro Rosso, some five or six lengths ahead.  The chase would prove to take the entire lap, with the Sauber slowly reeling Buemi in.  Then, finally, going into the final turn, Kobayashi came from three or four car lengths back, seemingly without touching his brakes, leaped to the inside of Buemi and rolled past in a daring and bold move."
It was the sort of performance that nobody expected from the rookie in a mediocre car, and easily became our favorite moment of the season.

*DRIVER OF THE YEAR:  We suppose that we need to give this to Seb Vettel.  After all, he won five races, took pole 10 times, and won the Driver's Championship.  He made some awfully stupid mistakes along the way though, enough to make this difficult to swallow.  In our hearts, we think HWMNBN should be given the trophy... but we're giving it to Vettel.

*TEAM OF THE YEAR:  No question about this one: Red Bull.  Far and away the best car on track all year, 15 pole positions, and both the Driver's and, more importantly, Constructor's Championships.  That the strife between their two drivers didn't cause the team to disintegrate, despite it partially being caused by the team itself, just makes it all the sweeter.  For a team only in its sixth year in the sport (assuming you don't count the time as Jaguar) boggles the mind.  Adrian Newey, the car designer and chief aerodynamics engineer, truly is a miracle worker.

And so the 2010 F1 season goes into the record books as perhaps the best of all time.  We're glad to have had you along for the ride for all 19 races, and look forward to being there for all 20 in 2011!  See you when the teams start bringing out their cars!

...and you thought we'd never do one of these.