F1 United States Practice 3: Liveblogging! (PRE-SESSION)  So here we are again!  It's 45 degrees and sunny at the Circuit of the Americas, looking for a high of 68.  That's a little cooler than F1 tires like, but it's certainly good enough.  In any case, Practice 3 is only 60 minutes in length, as opposed to the usual 90.  I'll be using the time remaining as the time notation:  if you see (45:30), that means 14.5 minutes have gone by in the session.  Read from (60:00).  Please keep all extremities inside the blog at all times.  Wonderduck's Pond is not responsible for any injuries incurred in the reading of Wonderduck's Pond.  Post no bills.  Accept no substitutes!

(53:55)  Narain Kittylitter is third on the time sheets as SPEED goes to commercial... that might be the first time I've ever seen his picture on the screen during a session.  At least, on the "first page," not at the end. 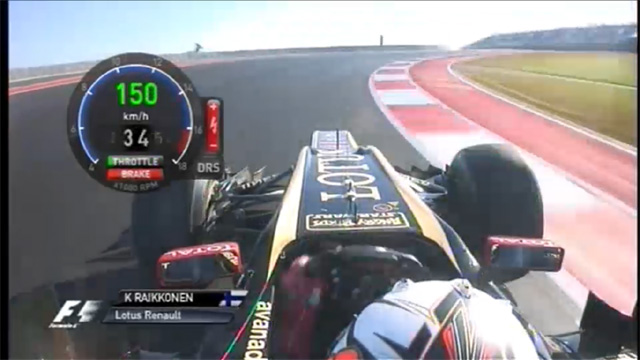 Kimi at the far end of the esses.


(45:14)  Apparently Nico Rosberg is having problems with his seatbelt, but doesn't pit.  Hm.  Must not be that big of a problem.  I'd be panicking, m'self.

(44:11)  YEOWTCH!  Slappy just cut across Massa's nose like he had no idea the Ferrari was there.  Good lord, the old guy is getting senile!  (note: Slappy is younger than me)

(39:43)  They're saying that the tires aren't wearing at all.  Kimi just did nine laps and all the team did was brush the dust off them and sent 'em back out... wow.  I knew they went conservative on the tires, but that's ridiculous.

(36:30) Jenson Button was bouncing off the rev limiter coming down the back straight just now.  Think you need to fix that, McLaren.

(32:29) Just a reminder, Vettel leads HWMNBN by 10 points in the Driver's Championship... it could be decided tomorrow.

(30:02) Lots of pounding around out there right now, but little action if you know what I mean.  Fuel runs and the sort.

(29:18)  HRT is questionable to make the race, to be honest.  Pete Rose barely hit the 107% rule yesterday, Kittylitter wasn't even close, and apparently neither are likely to make it today.  That'd be a shame.

(23:00)  Jules Vergne has a broken suspension and is parked in the grass out on track somewhere.  Vettel may have deranged his steering as well, going over the back of a curb... will keep an eye on that.

(21:09) It sure looked like Vettel's left front was pointing the wrong way, but nobody's saying much about it, so maybe I was wrong?

(16:04)  I'm not saying much, because there just doesn't seem to be much going on.  Other than Jules Vergne being hooked off the track causing a local yellow, really it's just lap after lap of lap after lap.

(13:00) We're getting Charles ToothPic on the stream right now... that's a sentence I never thought I'd type.

(12:50) And right as I post that, it changes to Maldonado.  And so goes away the moment in the sun for Marussia.

(9:29) Both Red Bulls are rolling out of the pits, so I must've been wrong about Vettel's "damage."  Yeah, that's never happened before.

(6:20) A little bit of traffic out there for Felipe Massa. 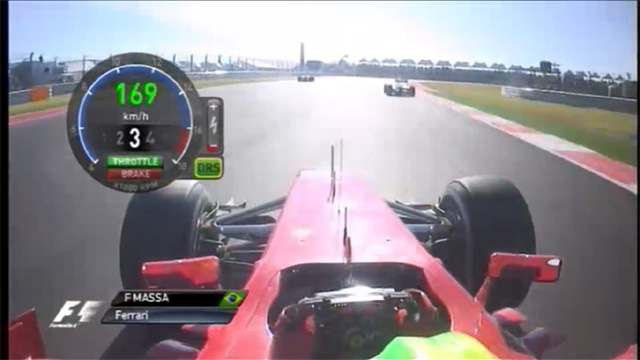 Also, just in: Lettuce Grosjean has transmission problems and is in the garage.

(4:36) Tom Tjarks, the battery symbol shows just how much charge is left in the KERS system.  They do indeed use leafblowers when the cars are in the pits; it's for cooling... if a F1 car isn't moving, there's no cooling going on in the radiators or for the brakes.  They can easily cook themselves without some sort of help when stopped.

(1:21) Apparently the "golden lap" for the medium tires is Lap 4... that'll make Q3 awfully interesting!  They don't usually DO four laps in Q3.

Right, two hours to Quals, let's see if I can get to the grocery store and back in time!  See ya then!

1 Hey WD, do you know what the little 'battery' symbol above the DRS is for?    And are they using blowers on the cars when they're pitting?  Are they that starved for air at a stop?

2 It's the KERS charge status - it's full if the whole bar is red. When the driver activates it, the yellow border appears around the bar.