F1 Quals: Monaco 2011 (UPDATED) We got a big dose of the reality of motorsport today during Quals for the 2011 Grand Prix of Monaco.  Here's the provisional grid:


Sauber driver Sergio Perez suffered a massive wreck on his first hot lap in Q3.  He came out of the tunnel wide, which put him on a piece of track that has a small dip in it.  The rear of his car lost traction and snapped him across the track and into the armco, tearing the tires off the right side of his car.  Sliding off the wall, he then slammed broadside into the TecPro barriers at the Harbor Chicane. 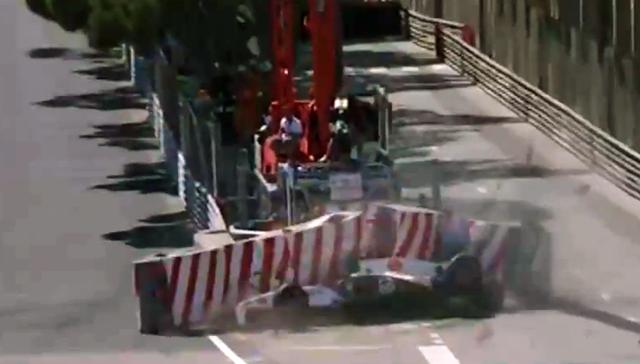 Q3 was immediately red-flagged, as the accident moved the padded tire barrier onto the track itself.  Marshals were at the accident site quickly, and almost as fast it was clear that Perez was hurt.  An ambulance was summoned and arrived shortly, followed by the FIA medical car.  It took some 20 minutes to extricate Perez from the ruined Sauber, while marshals stood around the car, holding a tarp above it to prevent spectators from seeing what was going on.  The television director did not help our growing unease, staying on the very-long view; a sure sign that something serious has occurred.  It got even worse when the Legendary Announce Team reported that the Sauber pit wall had called Perez immediately after the accident... and got no response.  Just to ramp the fears up to greater heights, he was loaded into the ambulance, which event we could not see due to the preponderance of marshals surrounding him.  The ambulance then drove off... slowly.  He was taken to Princess Grace Hospital in Monaco, which is actually just off the main straight, and at last report was conscious and aware and complaining of pain in his legs.

To be frank, I expected the worst.  F1 cars are very sturdy, and the monocoque is exquisitely protected, but nothing about the accident felt right.  Even the incongruous 'flumpf' sound the car made when it hit the padded barrier was out of place.  The only good thing about the crash was that Nico Rosberg had a similar wreck in P3, except that he missed the barrier by about two inches.  That incident led the organizers to remove the speed bumps from the inside of the chicane which prevented Perez from getting airborne, unlike Rosberg. 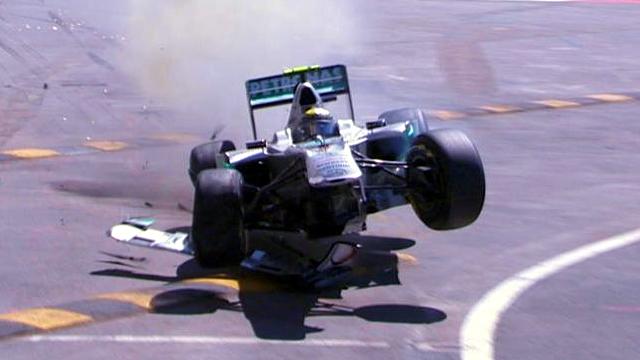 One driver walks away, one driver doesn't.  I surely hope Perez is all right, though I doubt he'll be in the car for tomorrow's race.  More as this develops.

The rest of the Quals pales in comparison to Perez's crash.  Neither HRT car took part in the session, and as they were substantially off the pace in all three practices, they will probably not be allowed to race on Sunday.  Seb Vettel is on pole, but didn't exactly look dominant.  Expect a decent race on Sunday.  We'll see you then!

UPDATE:  Sauber has put out a press release detailing Sergio Perez's condition.  "It was with great relief the Sauber F1 Team received the news that Sergio Perez has no serious injuries after his heavy accident in the closing minutes of the final part of qualifying for the Monaco Grand Prix.  The doctors said Perez had suffered concussion and a sprained thigh, but no broken bones and, following a scan, they could find no further injuries."  He'll be kept in hospital overnight for observation and the concussion pretty much guarantees that he'll not be racing on Sunday, but wow!  What a relief.

Also breaking, the stewards have decided to allow both HRTs to run in Sunday's race.  This despite never making the 107% time in any of the practice sessions.  Their pace in P3 would have made the 107% time in Q1 however, which must be what the stewards are looking at.  Good for HRT, I guess.

1 The way they handled the wreck was more scary than the crash.  Covering the site from view, the medical car leaving before the ambulance, and then the slow-moving ambulance were not encouraging images.  I'll look forward to any undates.

Vettel seems to be unbeatable this year. It's an amazing performance -- but it doesn't make for an exciting series. I'd prefer a bunch of drivers to all be bunched up at the top of the driver's list.

Vettel currently has a 51 point lead over Hamilton in second place. And now he's on the pole in Monaco. I'm sure Red Bull is ecstatic about how things are going.

3 I hadn't seen anyone actually running the Monaco track before. Claustrophobic doesn't even begin to describe it. Where do you -pass-?

4 There is one real passing location, and one that only the bravest/foolhardiest try.  The one true passing zone is the Tunnel.  It can be done, but you need a decent amount of speed differential to make it work.

The other place is the Harbor Chicane, usually as a continuation of a move begun in the Tunnel.  HWMNBN is pretty good at passing there, not afraid to block someone into the run-off area if he needs to.  Slappy used to be able to do so, though his skills may have deteriorated enough to keep it from being a reality in his case.

For the Trulli suicidal, Rascasse is a place you can try, but don't expect to have much of a car left afterwards.