F1 Quals: Monaco 2009! Bizarro Season continues with two teams setting significant firsts, a fascinating back of the grid, and slow cars suddenly becoming fast.  It's Monaco, it's Quals, and here's the provisional lineup: 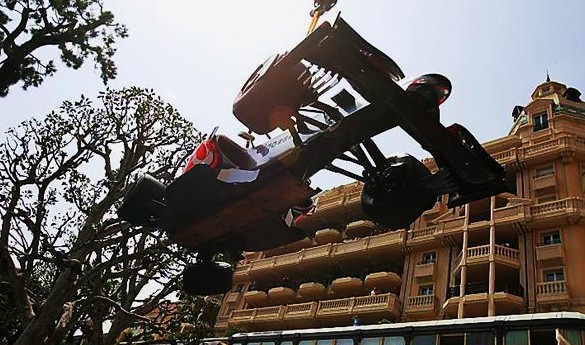 Not a common view.
Defending winner Lewis Hamilton lost it in Mirabeau, smacked the wall and broke his rear suspension in Q1, but look at the other four who didn't make it out of Q1: both BMWs and both Toyotas!  In fact, this is the first time ever that neither BMW made it out of Q1.  Toyota's performance might be the most surprising thing, though.  Or lack of performance... a team that started out so hot, that looked so good in Australia has slowly become backmarkers.  It's nuts, but it's also Bizarro Season in F1.  For heaven's sake, both Force India drivers made it out of Q1, also for the first time ever.

The rebirth of Ferrari appears to be in full-force.  Kimi Raikkonen turned the fast lap of the day in Q2, averaging over 100mph on the slowest circuit on the calendar.  That's pretty darn fast around Monaco.  That Q3 times only went up about half-a-second suggests that everybody up front ran light on fuel in their bid for the all-important pole.

Which, for the fourth time in six races, is won by BrawnGP's Jenson Button.  Right behind him on the grid is the aforementioned Raikkonen, and Button's teammate Rubens Barrichello.  Sebastian Vettel's RedBull, after sitting on provisional pole for most of Q3, ended up fourth, followed by Kimi's teammate Felipe Massa.

So supposedly slow cars up the grid, allegedly fast ones down the grid, and the current Monaco master (Hamilton is acclaimed as the best Monaco driver active) sitting low.  Should make for a fascinating race on Sunday, and of course F1 Update!'ll be right here.

UPDATE:  Fuel weights have been released, and it's not looking good for anybody not driving a Brawn.  Button's weighing in at 647.5kg, Barrichello's at 648kg, everybody else in the top eight is at least 4kg lighter.  Monaco's a different type of track, but one thing doesn't ever change: having more fuel than anybody and still being the polesitter is a good combination.

Nice to see Ferrari making a come-back.  Wonder if the race will be as unpredictible?

Whoever got that photo has a combination of incredible luck, good equipment, and good reaction time. It's a keeper. Is that Hamilton?

Button is having the season of his life. It'll never be better than this for him.

3 It is Hamilton's car, yes.  Just about the only place you'll see photos like that one is at Monaco... it's the only track that really needs to fly dead cars off.  Remember these pictures?

Oh, I missed it. That thing's being picked up by a crane.

I thought the camera-man had caught the car in mid-crash! (And I was wondering why there was no motion blur!)

That would have been a most impressive photograph, yes!