F1 Quals: Monaco 2008! "I don't like Monaco," says Felipe Massa.  "I never have.  But I'm beginning to like it a little bit more."  Kimi Raikkonen's view on the matter?  "Obviously, I would have preferred to be on pole and there's no point denying it, but two Ferraris ahead of the rest is a great result for the team."

Yes, the unexpected result of an all-Ferrari front row-- on the track that McLaren historically dominates-- has really thrown the Grand Prix of Monaco into a cocked hat.  44 of the past 54 races at Monaco have been won from the pole, which would suggest that Massa is going to run away with this one, except for one little thing:

There is an 80% chance of rain during the race, which takes everything in that cocked hat and dumps it into a gutter.  All bets are off when it rains at Monaco; F1 Update! officially goes on the record as saying that we have no clue who's going to win on Sunday.

You may note that The Chin made it into Q3, but was unable to turn a lap therein.  That's because at the very end of Q2, he slammed into the inside wall just out of the tunnel, probably due to a zorched tire. 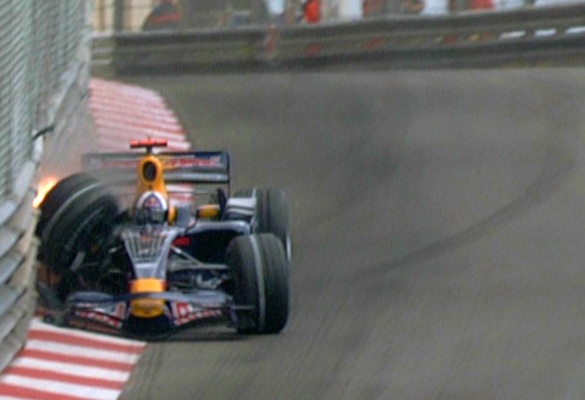 Assuming the team doesn't have to change his engine or gearbox, he'll be starting 10th.

1 Too bad it's airing at 4:30am local. I'm going to have a hell of a time justifying that.

And Kubica is #5, amongst the top qualifiers again. He does seem to be the real thing this season. I wonder if he'll win any?

How is Kubica on wet tracks?

Steven, Kubica's F1 experience in wet races is... mediocre.  His first race, Hungary '06 was in the rain; he finished 7th.  In last year's European Grand Prix, he was 6th.  He finished 7th in the GP of Japan last year.  He had a DNF in the GP of China (gearbox).

I just took a look at the results, and I'm really looking forward to your report on this one.