F1 Quals: India 2011 It's always a point of pride to be the first ever to score a pole at a new track, but it's not like that's the only thing up for grabs here.  Red Bull could set a single-season record with a pole, and Seb Vettel could continue his chase to tie a record.  And, of course, everybody else would like to prevent that from happening.  So how did it shake out?  Let's take a look at the provisional grid for the 2011 Grand Prix of India:


Well, it was hardly unexpected.  As he has all season, Seb Vettel blew away the field to earn his 13th pole position.  In doing so, Red Bull won their 16th of the year, a new single-season record.  Surprisingly, there was no drama to Q3 at all.  Vettel went out, set a lap that was good enough for pole and let everybody else take their shots.  When McLaren's Lewis Hamilton came close to bumping him on the first run, Vettel returned to the track.  In the middle of his second run, Felipe Massa brought out the yellow flags when his suspension broke going over a curb. 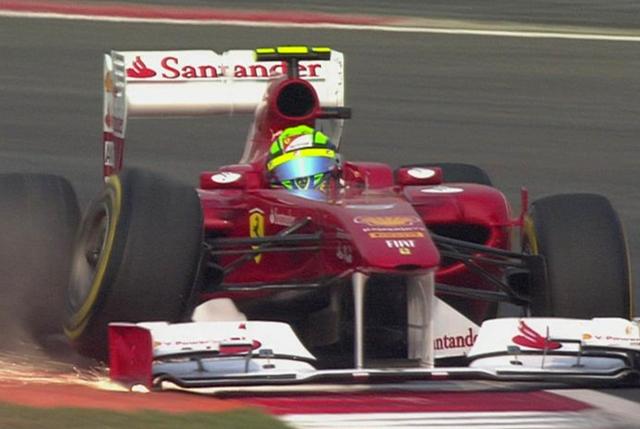 This rather abrupt loss of grip sent him nose-first into a wall in a style reminiscent of his 2009 Hungary wreck.  Fortunately there were no springs flying around this time, and the Brazilian got out of the car unscathed.  Behind him, however, were all the drivers who had any possibility of beating Vettel's time: Jenson Button, HWMNBN and Mark Webber.  While Button was having difficulties some difficulties with his tires, he had a decent looking lap going.  All three were badly hurt by the yellow flags, which required them to slow down in the vicinity of Massa's wreck.  Lewis Hamilton, who was ahead of Massa on the track, aborted his second run for pole when it became clear that he wasn't even going to match his first flying lap.  So instead of a tense shootout, it became a fait accompli.  Nico Rosberg's Mercedes never really had a chance, and the two Toro Rossos never even left the garage.  The Force India of Adrian Sutil turned an installation lap to the delight of the Indian fans, but returned to the garage to preserve his tires for the race.

At the back of the grid, we have an official changing of the guard.  For the first time ever, both HRTs qualified ahead of both Virgins.  It's been coming for a while now, but it's now obvious that the Virgin F1 team is now the slowest on the grid.  Tim O'Glockenspiel barely turned a timed lap before his gearbox decided to grenade itself.  He will be allowed to start dead last.

Finally, there are FIVE separate drivers dealing with grid spot penalties.  Lewis Hamilton and Sergio Perez both lose three spots for their ignoring yellow flags at the end of P1, sending Hamilton to fifth and Perez to 20th on the grid.  The Red Menace got a five-spot penalty for causing an accident (with Slappy Schumacher) in Korea, dropping him to 16th.  Finally, both HRT drivers received penalties as well:  Kittylitter for impeding another driver, which drops him to 23rd; and Daniel Ricciardo gets a five-spotter for having to change a gearbox before Quals.  He'll start 22nd.

So, that's the news from the first Indian quals!  The race is in the morning, and F1U! will duly follow.  See you then!