F1 Quals: Europe 2016 An intense interest in the new circuit at Baku gave today's Quals event a beautiful edge.  Good weather and much running over the past few days meant that the track surface was the best it had been.  The problem discovered with curbs cutting the left-rear tires seemed to have been fixed, and there was eagerness from the drivers to get on circuit.  No surprise that Lewis Hamilton's Mercedes had been the fastest all weekend, but would he gather the first pole ever on the new track?  Well, here's the provisional grid for the 2016 Grand Prix of Europe @ Baku:


Hamilton didn't seem 100% contented with his Merc in Q1 or Q2... he was still quick, but not his usual "run away and hide" fast.  But then he just doinked the wall in Turn 10 just past the Castle, and his suspension was broken.  He never had a chance to set his flying lap so he'll be starting 10th tomorrow.

Something of a surprise came in the form of Sergio Perez's Force India.  His 2nd place is 100% valid, no fluke involved anywhere.  Unfortunately, he won't actually be starting next to Nico Rosberg on Sunday... he had a crash in Q3 that required, among other things, a new gearbox, which ccomes with a five-grid-spot penalty.

Beyond those, however, the grid is pretty standard.  Oh sure, Rio Rainbow Gate barely missed Q2, that's weird, but... well.

Now, let's get to what we all want to know: what does Wonderduck think of the Baku Circut?  To be blunt, this track terrifies me and here's why: it's an unholy union of the tracks at Monaco and Indianapolis.  What little run-off area exists is tiny and the speeds ridiculously high.  Until you get to the "Old Baku" part of the track, at which point it's slower, but also narrow as hell.  Except when it isn't slow, but still narrow, downhill and off-camber.  Valtteri Bottas hit 227mph down the long, long straight this morning, and my heart was in my mouth every time someone came piling down towards the first turn.  What pictures fail to convey is just how bumpy this place is.  Remember, they're just city streets, and while they may have gotten a lick of fresh asphalt for the race, they ain't smooth.  The suspensions are working like I've never seen them before, constantly moving up and down with a range of movement measured in inches instead of millimeters.  Jenson Button says that the track is unnecessarily dangerous, and I have a hard time disagreeing with him.  In some ways, the FIA should be commended for creating such a dramatic, exciting layout... but they seem to have done so by skimping on safety.  Look, there's only been one race on Baku: the GP2 feature race was run before Quals today.  They had four safety cars in fewer than 26 laps.  To be fair, the GP2 gang tends to be more... exuberant... than F1 drivers, but that's excessive even for them.

Whatever happens, it'll be exactly what F1 should be: a spectacle unmatched by any in motorsports.  See you afterwards! 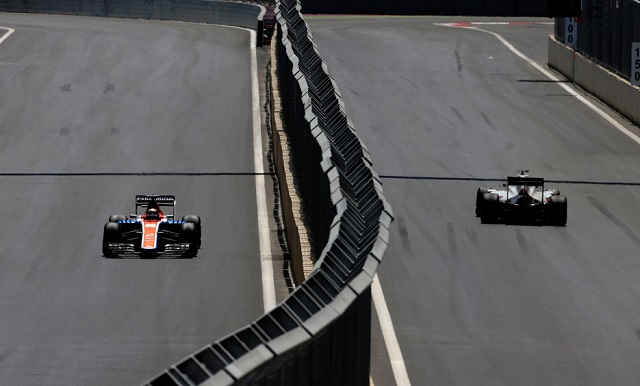 1 Sounds like this will be worth getting up for. (At 6AM PDT blech) I guess I'll set an alarm on my phone.