In the 20-minute long Q1 session, we didn't see a car on track until nearly the half-way point.  See, here's the problem... the tires Pirelli has brought to China are the Medium and the Soft compounds.  We already know that the Mediums last forever, but we haven't seen the Softs until this weekend... and HOOBOY, do the teams have a conundrum.  See, they have nearly a 1.5 second time difference over the Mediums... but they last for about two hot laps before they die screaming, and that's when the cars are light on fuel.  With a full 300lbs of gas on board?  They might make it to the end of the pit lane before they fall off... it depends on where your pit box is located.  Since the teams know that they've got to use a set of these jelly-filled donuts during the race... well, you can see why they weren't out there, pounding out the laps.  Almost nobody bothered taking the covers off the Mediums in Q1... what's the point?  Kill off the Softs in Q1, maybe you'll get to Q2.

In the 15-minute Q2 session, again people didn't come out until the session clock had been going for a while.  Again, the jelly-donuts were the rule of the day, and everything looked to be as boring as Q1 until we saw this sight: 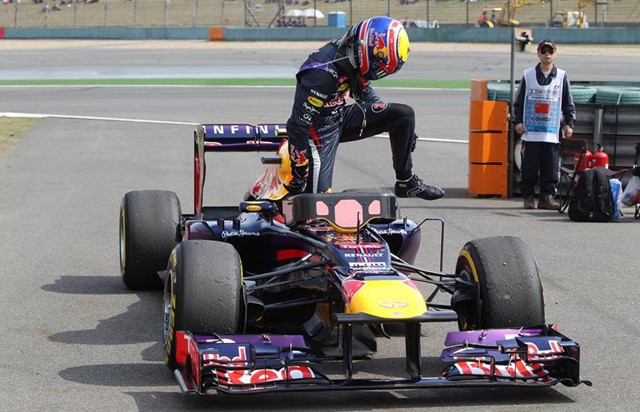 While he had managed to set a time, Mark Webber couldn't make it back to the pits.  The team called it a "fuel pickup problem."  Yes, the problem was that there was no fuel for the fuel pickup to pick up.  A problem with the fueling rig left him about six pounds of gas short of the planned amount.  A dumb mistake, but it happens.  However, the Stewards take a dim view of that during quals, as cars have to present one liter of fuel to scruitineering after the session.  Webber wasn't able to do so: no fuel left.  So the Stewards DQ'd him from Quals.  While he was 14th, he'll be starting from the back of the grid on Sunday.  I'm absolutely sure that there aren't any conspiracy theories flying around about how Red Bull  "accidentally" shorted Webber for his anger after the last race.  None whatsoever.

Then came Q3.  Hannibal Vettel was first out, but didn't set a time and never moved from the garage again.  McLaren's Jenson Button went out and drove the entire lap with his turn signal blinking... a 2:05.673 was the result, as he tiptoed around, taking care of the rubber.  Those two will be starting on the Mediums; everybody else is on the Soft rubber.

So the race is going to be one of alternating tire strategies: most will go Soft Medium Medium.  Most will be going Medium Medium Soft.  From where I sit, that seems to be the best plan... but that's why they race the race, isn't it?  It's supposed to be dry and warm on Sunday, we'll see you then!

1 Mercedes sure is turning out to be a pleasant surprise. They seem to have gotten the cars right, and they have good drivers. Certainly they're going to be competetive this year!

2 A-yup.  Last year, they moved into the Big Leagues, but I never really thought of them as a serious contender for anything more than podiums and the very occasional win.  Fourth or fifth of the big five teams, depending on how well Lotus did that race, y'know?

Not this year.  This year, any of the Big Five (Ferrari, McLaren, Red Bull, Mercedes, Lotus) could win the Constructor's title.  I think it's going to be a fight between Ferrari and Red Bull, but it wouldn't surprise me if any of them won it.

Well, maybe Lotus.  I'm not sure I really take them seriously yet.

3 There's some adversity that one just cannot overcome.

4 The question with Mercedes isn't how they start the season, it's how they manage the development race over the course of the season.  In the past, midseason development has been their weakness, throughout the last 3 years as Mercedes and even back to 2009 as Brawn GP.  They started that year in dominating fashion, but ended up just barely clinching the championships because they did poorly at developing the car.  I'm withholding judgement on their true form until at least half way through the season.