For the first time this season, a Red Bull is not on pole.  It took a last-gasp lap from Lewis Hamilton to kick them out of the first spot on the grid, done on the super-soft tires and with so little fuel on board that Lewis had to literally push the car back to the pits, but they did it.

But then, this is Formula 1 so there just had to be speculation that Hamilton would be penalized for running out of fuel.  Since he did not return to the pits within X amount of time, he was in violation of Article 15.1 in the Sporting Regulations.  In theory, he could have had his fastest time ruled invalid.  Instead, he was reprimanded and given a $10000 fine; chump change in F1 terms.

However, this won't be a McLaren walk in the park.  Both Webber and Vettel are on the "hard" compound (actually the medium rubber), which is the tire that the teams universally prefer this weekend.  The softs are a smidge faster, but are dying off after about six or seven laps while the hards are more durable.  Bridgestone is saying that the teams will pretty much have to stop twice for tires this race, that there's no way a car can stretch the tires to last the whole distance.  Of course, there's rain forecast so that might throw everything into a cocked hat, but at the moment I'd have to lean towards the Red Bulls.

A laugh and a shot to the ribs to Slappy Schumacher who couldn't do better than 13th and just as easily could have been a lot farther down than that.  It might not get much better from now on as it sounds like Mercedes has run out of cash for developing the 2010 car.  In F1, if you're standing still, you're falling behind.  Wave bye-bye to Slappy for this year, kids.

A special "yahoo!" goes to the Force India team.  Both cars in the top 10, which might be the first time they've done that (I'm not sure about Spa, last year).  Certainly it's the first time this year!  I knew they were fast.

But today goes to McLaren and Hamilton!  Nicely done, lads. 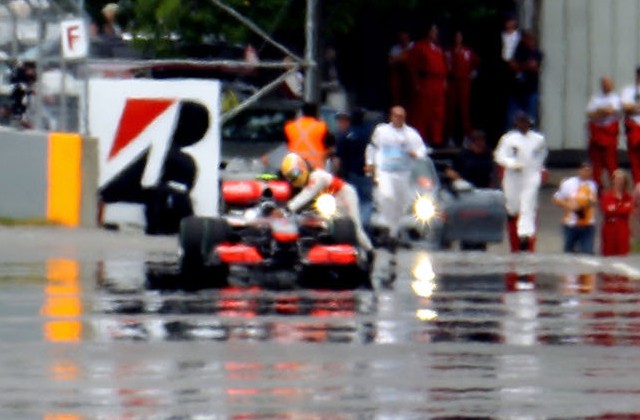 1 Force India at 6th and 9th? That is genuinely awesome!

2 Lewis is cool and everything but I'm rooting for Webber. We've not had a driver who was genuinely nice to fans since Gerhard Berger, at least not on the forward side of the grid.

3 You misunderstand my giddiness, Pete.  It's not because I like Hamilton, but because someone kicked the Red Bulls off pole for once.  I'd be happy about it even if it was HWMNBN or Slappy.