Okay, Vettel on pole isn't a surprise.  It's his third of the season, and his second in a row.  Barrichello and Webber aren't a surprise, either.  Trulli?  Toyota's quick, so it's no surprise to see him fourth.  But Jenson Button in sixth?  Lewis Hamilton 19th?  Good merciful heavens.

Uh-oh.  Not only that, but Vettel had the fastest times in all three quals, AND the fastest sectors of all as well.  Could it be that the RB5 has caught up with Brawn?

In a word, yes.  Silverstone has seen Adrian Newey roll out some new aerodynamic modifications to the front of the Red Bull chassis. 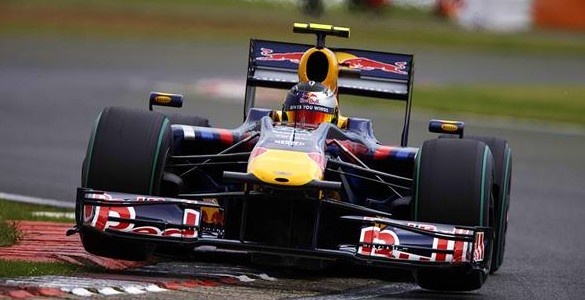 Compare this to the original nose on the RB5.  It used to be very narrow, almost fragile in appearance.  Now it is much wider (though narrower than the Renault).  Can such a change make that much difference?  I guess we'll find out on Sunday afternoon!

1 I was amazed Sutil walked away from his q1 crash almost straight away, that was a hell of an impact. Totally screwed things up for Hamilton, although to be fair if he'd scraped through to q2, I doubt he would have got much further. Vettel was in fine form, obviously favourite for tomorrow on that performance, however I still think Button will nurse his tyres nicely as usual and nip it towards the end.

It was, indeed, a shocker to see Hamilton second to last on the grid.

I'm pulling for Button to win, especially since it's his home GP.